Home All The News Liverpool 1-1 Chelsea: 10-man Blues take a point away from Anfield 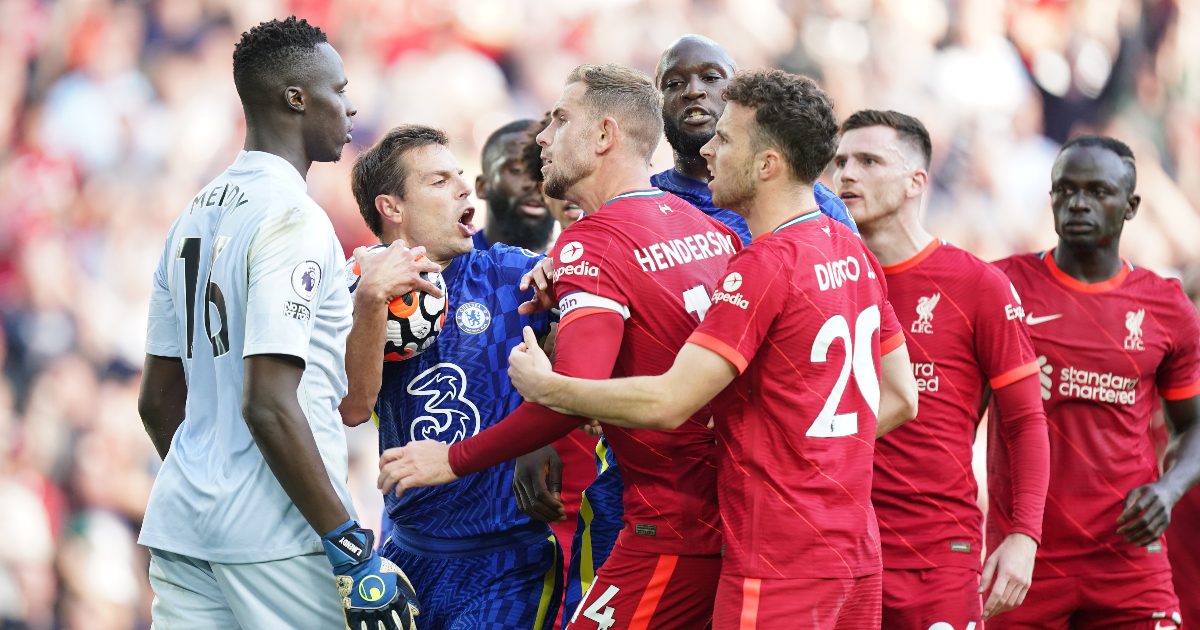 10-man Chelsea defended well in the second half to earn a point against Liverpool at Anfield after Reece James was sent off before half time.

Kai Havertz headed Chelsea in front before the half ended in dramatic fashion as Liverpool were awarded a penalty.

Anthony Taylor sent Reece James off for a handball on the goal line. The subsequent penalty was taken by Mo Salah and the forward expertly found the net.

McDermott has the eternal backing of Newcastle and Liverpool

All eyes were on Anfield as the Premier League title hopefuls went toe-to-toe on Saturday evening having started the campaign with two top-flight wins apiece without conceding.

Few could have foreseen the Blues coming away with anything after what looked to be a game-changing decision at the end of the opening period.

The atmosphere was crackling from the outset at Anfield, although the Liverpool boss will be disappointed that some ignored his plea not to chant a homophobic song aimed at Chelsea.

The Reds started on the front foot and exciting teenager Harvey Elliott tried his luck before Jordan Henderson failed to connect cleanly with an excellent Trent Alexander-Arnold ball.

Poor decision-making was preventing well-drilled Chelsea creating clear-cut chances at the other end, but they superbly capitalised on some lacklustre defending from a set-piece.

James swung over a corner from the left and Havertz was able to all too easily flick a fine looping header beyond Alisson Becker in front of the Kop in the 22nd minute.

Chelsea’s goal came from their first shot on target and they could have easily made things worse for the hosts.

Virgil van Dijk blocked Romelu Lukaku after N’Golo Kante started a Blues break, before Mason Mount struck across the face of goal as team-mates Havertz and Lukaku screamed to be played in.

Diogo Jota replaced Roberto Firmino before an entertaining first half came to a chaotic conclusion.

A corner from the returning Andy Robertson caused havoc, with Joel Matip seeing a header come back off the bar before James blocked Mane and Jota attempts on the line.

Liverpool players and fans alike screamed for handball when the Chelsea full-back blocked Mane’s attempt and Taylor was advised by the VAR to check the incident.

The referee pointed to the spot and sent off James after going to the pitchside monitor, enraging Chelsea’s players.

Salah kept his cool among the storm to slam home the penalty, with tempers again fraying after the equaliser.

Chelsea continued to make their grievances known as the players went off for a break from which Havertz and a seemingly injured Kante did not return, as Silva and Mateo Kovacic were introduced to shore things up.

It was a wise move given Liverpool re-emerged with the bit between their teeth.

Jota glanced a header over from a sublime Salah cross with the outside of his boot before Edouard Mendy stopped a 30-yard strike from Van Dijk.

Henderson bent agonisingly wide from distance and Mendy pushed a low Fabinho strike past the post, with Chelsea’s goalkeeper also keeping out a Robertson snapshot from the resulting corner.

It was one-way traffic but Chelsea managed to finally offer Lukaku some attacking backup in the 64th minute, with the striker’s shot blocked by Matip at the end of a good move.

The majority of the visitors’ energy was going into keeping firm at the back, where the wily Silva was expertly marshalling the backline.

Salah mishit a shot that dribbled straight into Mendy’s grasp and Alexander-Arnold stung the Senegal international’s palms towards the end of the match, with Kovacic having a half-chance at the other end.

Jota headed over as Liverpool pushed until the death, but there was to be no winner.