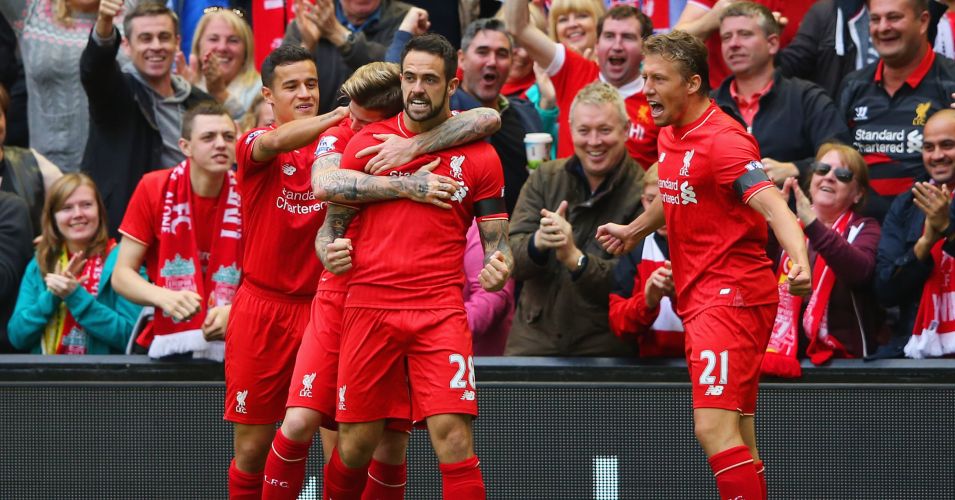 Liverpool made it five matches without a win after a 1-1 draw with Norwich City at Anfield, Danny Ings scoring their only goal.

Ings eclipsed the much-anticipated return of Daniel Sturridge by coming off the bench to score but it was not enough for victory against Norwich.

The half-time substitute needed just three minutes to coolly slot home his first goal for the club in front of the Kop.

However, when Simon Mignolet flapped at a corner Russell Martin flicked home to make it 1-1.

It was a familiar story of not being able to hold onto a lead – a much-changed side did exactly the same in the Europa League against Bordeaux in midweek – and while goals are still at a premium it is proving costly.

After seven points from their opening three matches Liverpool have taken one from the last three and are 13th in the table, seven adrift of leaders Manchester City.

It may have been premature for Norwich fans to sing ‘Getting sacked in the morning’ to Brendan Rodgers but there is no doubt the Reds boss is coming under increasing scrutiny.

Sturridge’s return, having not appeared since April 8 after hip surgery, was supposed to provide some relief from that but he will take time to rediscover his old self, although an hour’s play will have helped.

But it was his fellow striker Ings who injected some much-needed dynamism into an attack which had scored just three times in five previous league matches.

His busy play and relentless running is rapidly winning him plenty of admirers and if he can ally regular goals to that there will be greater adulation to follow.

Ings’ style has been referred to as ‘Suarez-lite’ and while he may have a long way to go to match the brilliance of the Uruguay international’s time at Anfield he is at least matching one record of the South American, who scored 12 times in just six appearances against the Canaries – including three hat-tricks.

Ings took his goal well and could have won it late on but could not quite get his foot around the ball having squeezed through a couple of tackles.
The 23-year-old arrived at Anfield in the summer – for a fee still to be decided by a tribunal – as fourth-choice forward but has already overtaken £10million Divock Origi and if he can form anything like the devastating partnership Sturridge had with Suarez then there could be further promotion to follow.

Rodgers jettisoned his 4-3-3 formation in favour of 3-4-1-2 a full three months earlier than he made the change last season which sparked a marked upturn in results.

Now, as then, it did not get off to the best start with a 3-0 defeat at Manchester United but if it is a way to get two strikers into the team then Rodgers may have to persevere with it.

It also brought the best out of Alberto Moreno, starting his first league match of the season, who was a bundle of pace and energy from left wing-back.

But familiar frailties were exposed as Martin punished a weakness at set-pieces and Philippe Coutinho, who squandered a one-on-one with John Ruddy, and Ings could not retrieve the situation.

Mignolet partly redeemed himself with a good save from Jarvis but it was another two points dropped at home after being beaten 3-0 by West Ham on their last outing here.

Norwich played a compact game and did not create much but having been presented with a gift they gratefully accepted.