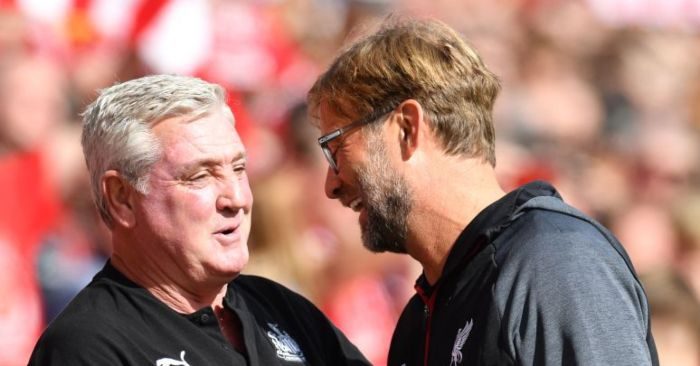 Book of revelations
‘REVEALED: How the Premier League table could change this weekend’ – talkSPORT.

You won’t believe it, but Sheffield United could go fifth – among numerous other changes – dependent on the results of some football games.

Champagne supernova
Since Sky Sports took the sensible course of action by taking Paul Merson off predictions duty – love you, Magic Man – and handing Charlie Nicholas the reins, there have been no bags of Revels, no moccasin slippers on glass mountains, no fun.

Then this week happened.

As a taster, here are his thoughts on Norwich v Watford:

‘We get the same issues with Norwich. They can score goals, but they certainly concede them. It has been quite a while since they scored. People were talking about Todd Cantwell and Norwich, but now once you have broken it down, do they have goals in them?’

They can score goals, but it has been a while since they scored. Do they have goals in them? That’s a tough one.

Next is Leicester v Arsenal:

‘This Leicester side are much better to watch than the title-winning side. They have pace, balance and are technically very good – you can get at them defensively in my mind but they are a decent force with pace and movement in the attacking half.’

Who ‘can get at them defensively? No Premier League side has conceded fewer goals this season.

Then, via a brief detour to claiming Matteo Guendouzi ‘is having a shocker’ and ‘getting away with it due to Xhaka’, despite being one of Arsenal’s best players this season, we head to Liverpool v Manchester City in what we feel compelled to call one of the ‘matches’ or ‘fixtures’ of the season. There is no other word to describe it, right?

Tammy Abraham ‘is a bit cold and not getting into the areas that matter as such’. He has nine goals in 11 Premier League games.

Steve Bruce ‘likes to play attacking football, but he cannot do so with this team,’ despite the fact that Steve Bruce has never recorded a positive goal difference in nine full seasons of Premier League football, and now has a £40m striker and two wingers signed for about £36m.

Bournemouth ‘can go anywhere and play well, as shown with the Manchester United game’. Which showed that they can go to their own stadium and play well. Against a mid-table team.

Merse would be proud.

Lawro laughs
On a similar note, congratulations to Liverpool on making it 125 games unbeaten in the Premier League with a 2-0 victory against Manchester City. And thanks to Mark Lawrenson and BBC Sport for making it happen.

If you insist
‘Jurgen Klopp insists Sunday’s heavyweight clash against Manchester City means little in terms of the title race.’

Does he now, Daily Mirror? That seems bold.

“It’s a massive one and I’m looking forward to it. But, if we win the game at the weekend and don’t win any games after that, there is nothing of real value there. If City win the game and no game after that, it doesn’t help them either.”

He’s not quite saying it ‘means little in terms of the title race’, is he? He’s quite sensibly pointing out that it is not the be all and end all, which is not the same thing.

Flores in the window
‘Watford boss Quique Sanchez Flores admits he is facing the sack – after two months.’

Did he now, Daily Mirror? That seems strange.

‘Asked if he feared for his job, Flores said: “It is not a ridiculous question – this is football and we know how it works.”‘

He’s not quite admitting to ‘facing the sack – after two months’, is he? He’s quite sensibly pointing out that “football is all about results” and, having been sacked by this exact club before, it’s not outside the realms of possibility it could happen again at some point.

Weather or not
Mediawatch will never get bored of Neil Custis’s streams of consciousness as he wrestles with the trials and tribulations of being paid to travel all over the world to watch and write about Manchester United playing football.

‘So, all sorted before we go later this month to Astana – or should I say Nur-Sultan as it has been called since March of this year? A city which has been Kazakhstan’s capital since 1997.

‘The stadium is covered and heated, thankfully.

‘However, if you stick your nose outside the hotel window during that trip it is likely to fall off with the temperature set to be -12C, with the wind-chill factor taking it further down to -20C.

‘I may never complain about the weather in Manchester again.’

Is everyone else excited for the Twitter meltdown when he misses his flight?

Koeman, I lean
Sneers Andy Dunn in the Daily Mirror:

‘Always knew Ronald Koeman was a super-confident type – even by Dutch standards – but a clause in his contract that allows him to leave the Holland job if Barcelona come calling? Now that’s the sort of self-belief we could all do with.’

Well Netherlands have beaten Portugal, Germany (twice), France, England and even Northern Ireland during his 21 months in charge. He has taken them from 20th to 12th in the FIFA rankings. He had a successful playing career at the Nou Camp. And he is currently second favourite to replace the unpopular Ernesto Valverde as manager.

That ‘super-confidence’ does at least seem well-placed.

Recommended reading of the day
Paul Taylor and Ryan Conway on the East Midlands derby. (£)