Home All The News Liverpool set to make £15.6m loss on defender as exit nears

Liverpool are set to lose one defender for a fraction of the amount they paid for him in July 2014. 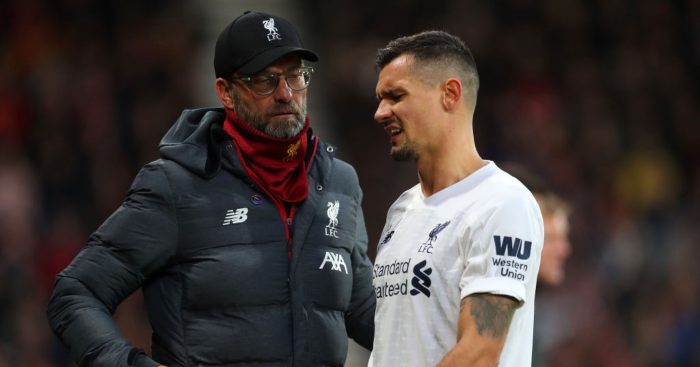 Liverpool are set to make a big loss on Dejan Lovren as the Roma target nears a summer departure, according to reports.

Lovren has only made 14 appearances in all competitions this season as he’s struggled to cement his place in the side with Liverpool storming into a 25-point lead at the top of the Premier League.

The Croatian has faced criticism when he has played with Liverpool legend Jamie Carragher annoyed at him for trying to “fight everyone he plays against”.

MAILBOX: How to finish the Premier League season in 11 matches…

There have been reports that Jurgen Klopp ‘might feel keeping him is the best option’ if they can’t get a decent fee this summer, while others have claimed he could be used as a makeweight in a deal for Napoli defender Kalidou Koulibaly.

And now Gazzetta dello Sport (via Sport Witness) claims that Lovren won’t be in Klopp’s plans and that an Anfield exit is looking very likely.

Lovren has one year left on his contract at Liverpool and the report adds that Roma are eyeing a discount due to their good relationship with the Reds.

In recent years Mohamed Salah and Alisson has swapped the Stadio Olimpico for Anfield and Gazzetta dello Sport reckon Lovren ‘could be bought with €5m (£4.4m)’.

That is a huge difference to the £20m that Liverpool paid to Southampton in July 2014 but Roma would still have to convince Lovren to accept a contract of no more than €3m (£2.63m) a year.