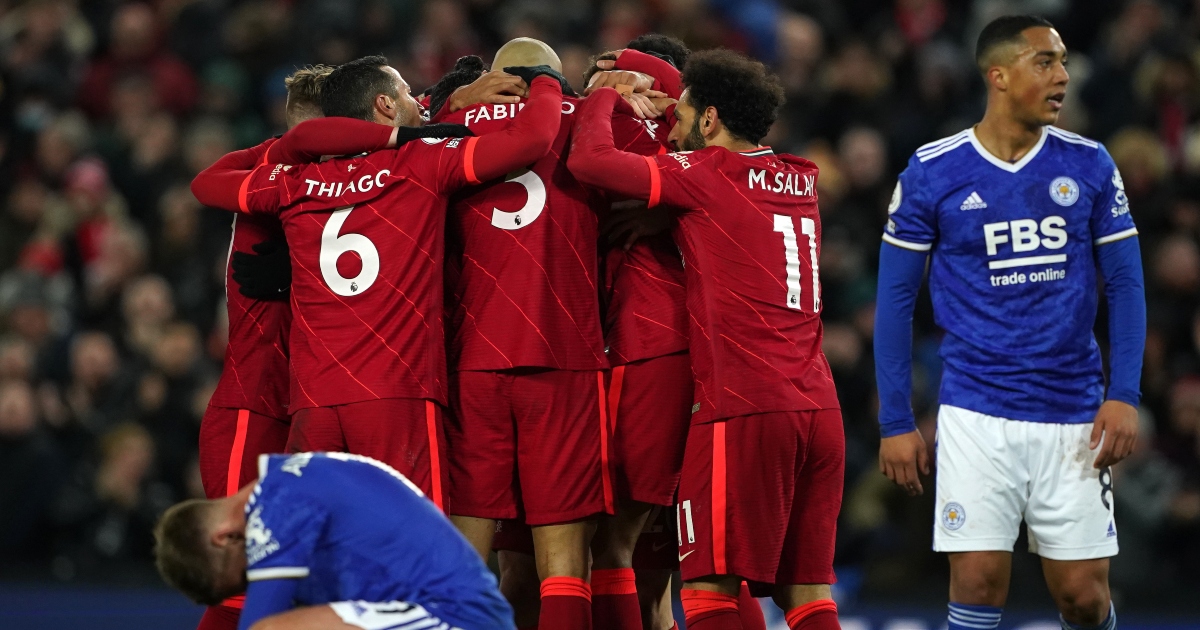 Jota has now scored in 18 different Premier League games for Liverpool, of which they have won 15 and drawn three, and he is proving an integral part of the club’s challenge on four fronts.

His first on Thursday took him into three figures, the second late on was his eighth against Leicester.

Leicester and Brendan Rodgers need to settle down together

The return of beaten Africa Cup of Nations finalist Mohamed Salah came from the bench, but it received the loudest cheers of the night when he eventually arrived just before the hour.

By then the home side had been leading for 24 minutes courtesy of Jota’s close-range strike after Foxes goalkeeper Kasper Schmeichel could only parry Virgil Van Dijk’s header.

The Portugal international has more than played his part over the last couple of months, scoring 12 in last 16 appearances, and his Premier League tally of 12 this season is only four behind Salah.

But Salah, possibly fuelled by his final heartbreak in Cameroon, could have had a hat-trick within 20 minutes of coming on had he not been denied by two good Schmeichel saves and the angle of crossbar and post.

The man who took his place in the starting line-up for his full debut, Luis Diaz, the £37.5million signing from Porto, also produced an encouraging display and would have opened his account had it not been for the continued excellence of Schmeichel.

With Sadio Mane, a newly-crowned African champion after success with Senegal, set to return for Sunday’s trip to Burnley, Jurgen Klopp’s attacking options look stronger than ever.

But, even though this win cut Manchester City’s lead at the top back to nine points and they have a game in hand and a trip to the Etihad Stadium still to come, Liverpool are going to need all the firepower they can muster.

Which is why it was something of a surprise it took them 34 minutes to break down a Leicester side low on confidence after Sunday’s humiliating FA Cup exit to Nottingham Forest, which prompted manager Brendan Rodgers to drop five players, including the likes of Caglar Soyuncu, Harvey Barnes and Kelechi Iheanacho.

But, after a brief early flourish, which saw James Maddison force the first save from Alisson Becker, the home side established a degree of control.

Schmeichel saved from Trent Alexander-Arnold and Roberto Firmino twice either side of Jota’s opener when Daniel Amartey lost Van Dijk at a corner.

Liverpool’s command extended into the second half until the introduction of Salah and Harvey Elliott created a slight disruption as Leicester’s attacking changes, Iheanacho and Youri Tielemans, produced some impact.

But it was not long before the hosts regained their composure, mostly thanks to the individual brilliance of Salah, whose twisting turns in the penalty area saw him denied at the near post, with Schmeichel’s outstretched hand in a one-on-one preventing a certain goal, before the frame of the goal frustrated him one further time.

Diaz also saw the Leicester goalkeeper deny him a goal in front of the Kop before Jota’s smart shot on the turn found its way under the Denmark international.