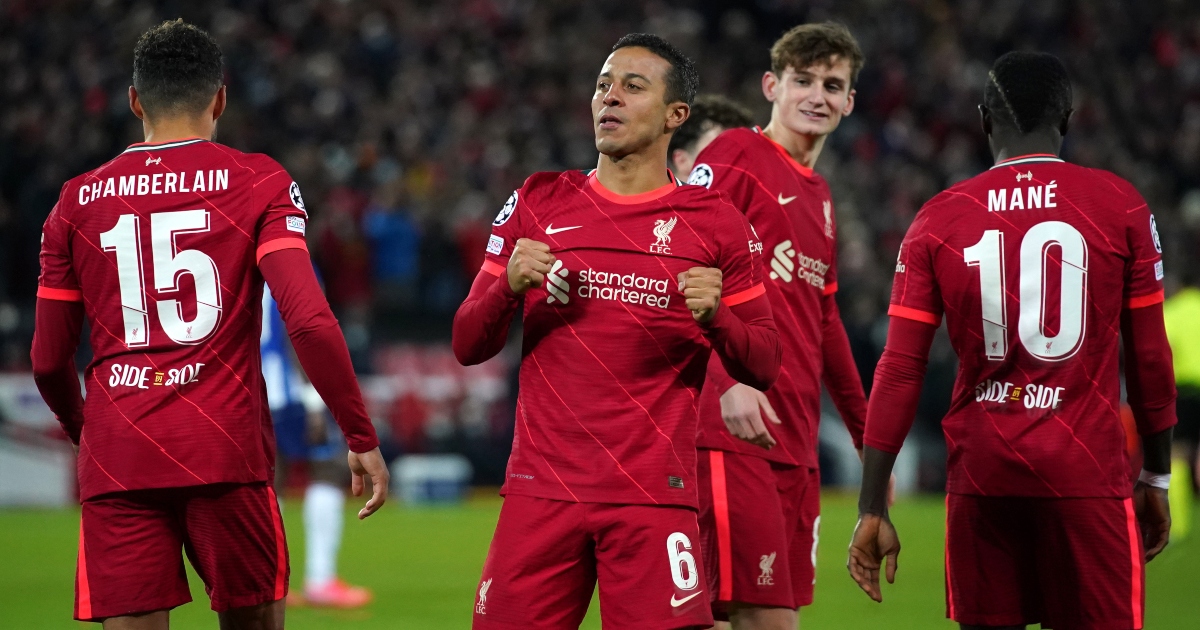 Goals from Thiago and Mohamed Salah guided Liverpool to a 2-0 victory over Porto in the Champions League on Wednesday night.

Thiago’s sweetly-struck low half-volley early in the second half was worthy of winning any game and the fact it came in a dead-rubber having already qualified for the last 16 should not diminish the quality of the goal.

Salah scored for the fourth time in three meetings against this opposition to take his personal Champions League tally to 32 with Steven Gerrard’s European record of 41 well within his sights.

But while the Egypt international has shone for the entire time he has been at Anfield it has been a less successful time for Thiago.

However, when it came his goal was nothing less than could be expected of the playmaker, whose arrival from Bayern Munich in a £20million deal in the summer of 2020 was hailed as being the signing to take Liverpool to the next level.

He endured a mixed start to his Anfield career, contracting Covid-19 shortly after arriving and then missing almost three months with a knee injury sustained in his first Merseyside derby.

This, though, was one of his better days as he gradually warmed to the occasion after a side showing four outfield changes – including two in the back four – from Saturday’s victory over Arsenal struggled for cohesion.

Thiago began to find his range midway through the first half and his perfectly-weighted pass to pick out Sadio Mane to run through and slide a shot across Diogo Costa appeared to have made the breakthrough only for VAR to rule it out by the tightest of offside margins.

That was merely an appetiser as he saved his best of the night for in front of the Kop, caressing a 25-yard shot past Costa after Alex Oxlade-Chamberlain’s free-kick was only half-cleared.

While the 30-year-old Thiago was impressing a fellow midfielder 11 years his junior was enjoying his Champions League debut.

Five days after his first Premier League appearance, academy graduate Tyler Morton slotted in between the Spaniard and Oxlade-Chamberlain and showed he could do a job at this level with some important defensive work, with one back-tracking run into the penalty area cutting out a dangerous cross at 0-0.

Jurgen Klopp’s changes did not help their early cohesion and Porto, with much more to play for, immediately seized the initiative but failed to take advantage due to some poor finishing and good defensive work from Morton and Oxlade-Chamberlain.

Mehdi Taremi’s header was deflected wide but Otavio will still be wondering how he side-footed when faced with an open goal after Evanilson broke clear down the left.

Not much was going right at the other end for Liverpool either as when Costa’s hurried clearance rebounded off Mane Salah was unable to get enough power on his shot to trouble the goalkeeper.

The loss of experienced defender Pepe, who made his competitive debut before Morton was even born, to injury afforded the hosts an opening but VAR denied them the lead.

Porto’s profligacy continued in the second half with Matheus Uribe shooting wide from a corner and it was the last real sight of goal they got as although the breakthrough was 52 minutes in arriving it was more than worth the wait.

Takumi Minamino had a volley ruled out for offside but there was no denying Salah, who cut in from the left to score a trademark goal this time with a shot inside the near post.

It was his sixth of the group stage, equalling Roberto Firmino’s record from 2017-18 – with still one match to go.

In adding a second Liverpool became the first English top-flight side in 82 years to score two or more goals in 16 consecutive matches.

Victory also brought up 15 points – beating their previous best of 14 set in 2008-09 – as they remain on course to be the first English side to win all six group games.