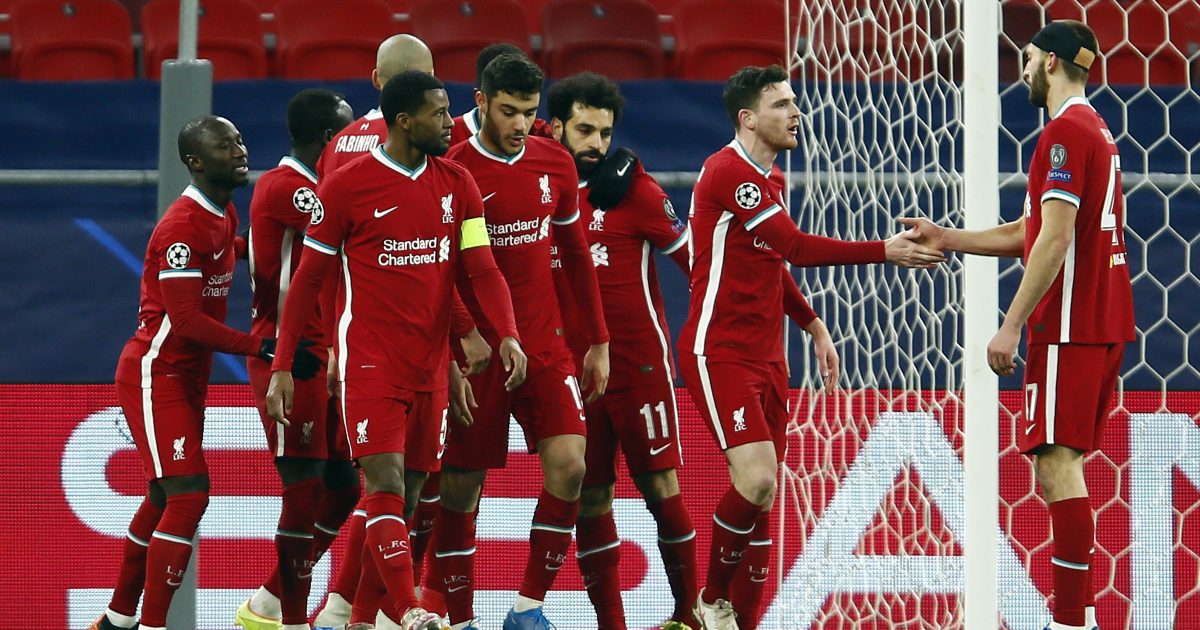 Quickfire second-half goals from Mo Salah and Sadio Mane helped Liverpool ease through to the next round.

This was Reds’ designated ‘home’ fixture but their woeful Anfield form – where they had lost six in a row in the league – meant they were probably grateful coronavirus restrictions forced them to play in Hungary again.

And having waited more than 11 hours for a goal from open play at home two came along within the space of five second-half minutes as Mohamed Salah and Sadio Mane – scoring the 100th Champions League goal in manager Jurgen Klopp’s 44th match in charge – made the tie safe with a 4-0 aggregate victory.

The return of Fabinho, one of five changes from the defeat to Fulham, to central midfield for the first time since he was forced to permanently deputise at centre-back when Virgil Van Dijk’s season was ended by a knee injury in the Merseyside derby in mid-October proved to be pivotal.

It also meant a fit-again Ozan Kabak partnering Nat Phillips, on his European debut having been omitted from the squad for the group stage, in an eighth different central defensive combination in eight Champions League matches.

The effect on the team was a marked improvement with the Brazil international providing essential cover in front of the back four, allowing the centre-backs to concentrate on defending.

Holding a 2-0 lead it was a night for an old-fashioned, no-nonsense centre-back and the excellent Phillips filled that role perfectly up against a traditional striker in Yussuf Poulsen, winning his fair share in the air and spotting and closing the gaps when danger appeared.

The other positive from Fabinho’s midfield presence was it allowed full-backs Trent Alexander-Arnold and Andy Robertson to play higher and with Thiago Alcantara freed from defensive responsibilities he could focus on the creative side of his game.

His desire to create was to his detriment early on when he opted to lay-off to Salah when played through the middle and the chance was lost.

Mane volleyed over, although would probably have been flagged offside, while Diogo Jota’s powerful header was tipped over by former Liverpool goalkeeper Peter Gulacsi.

Salah failed to beat the Leipzig keeper from a quick counter-attack, Mane making a mess of the follow-up header, as Klopp’s side looked more threatening.

Alisson Becker made one save in the first half from Dani Olmo after Leipzig broke in numbers but Liverpool should have been ahead in the tie just before the break as Jota was denied by Gulacsi after a three-on-three counter-attack and then fired into the side-netting after Dayot Upamecano miscontrolled to take the ball away from Gulacsi.

Liverpool were comfortable for the first 20 minutes of the second half but substitute Alexander Sorloth, the former Crystal Palace striker, hitting the crossbar with a header was the wake-up call they needed.

It worked as a quick passing move from just inside their own half involving Thiago, Mane and Jota teed up Salah to cut inside and slot home with his left foot in the 70th minute.

Mane made sure there was to be no late drama by converting substitute Divock Origi’s driven cross from close range to bring up Klopp’s Champions League century.

Surprisingly Leipzig had won eight of the last nine with the defeat coming in the first leg, failed where Premier League opposition have succeeded seemingly so easily as Liverpool were able to keep a sixth clean sheet in their seven European outings this season.

Europe may offer Klopp’s side the best opportunity for Champions League qualification as their domestic form – three wins since Christmas – has put a top-four place in jeopardy.

And if the six-time winners were looking for omens on the last two occasions the club have faced German opponents at this stage they have gone on to win the Champions League (Bayer Leverkusen in 2005 and Bayern Munich in 2019).