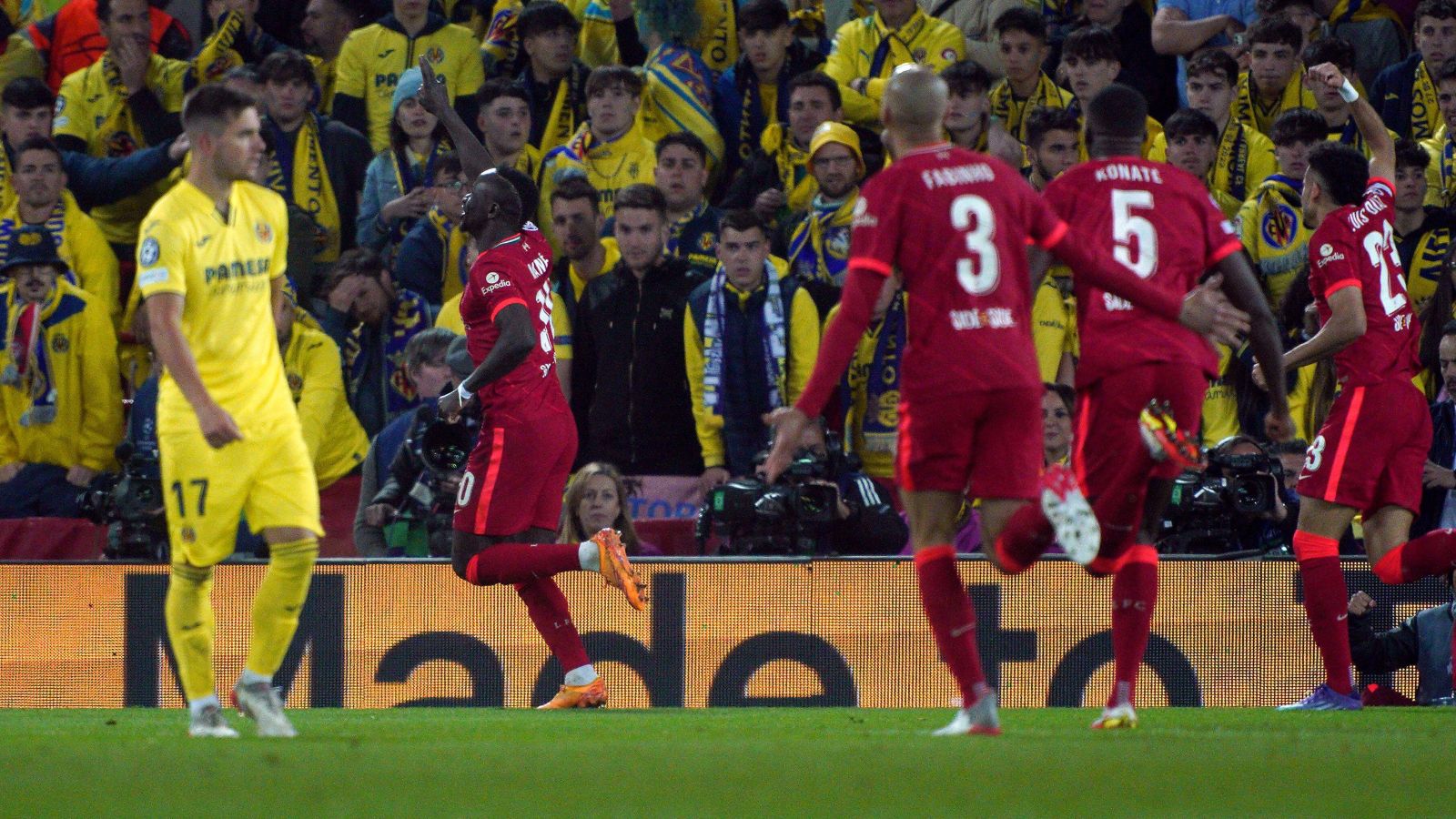 Sadio Mane got on the scoresheet as Liverpool beat Unai Emery’s Villarreal 2-0 at Anfield in the first leg of their Champions League semi-final.

An own goal from Pervis Estupinan and Mane’s 20th of the season did the damage at Anfield.

This was a comfortable night for Liverpool as they were much the better side against Villarreal.

Under Unai Emery the visitors had lost just one of 12 away games in Europe, in stoppage time at Old Trafford last September, and had beaten Juventus and Bayern Munich to reach their first Champions League semi-final since 2006.

Villarreal were perceived as presenting an easy option – by virtue of them not being Manchester City or Real Madrid – and Liverpool’s dominance from the off suggested that would play out with LaLiga’s seventh-placed team failing to register a shot on target in the game.

A big first-leg performance from the Reds 💪#UCL | #LIVVIL pic.twitter.com/jLEMjlQxDr

Even a goalless opening 45 minutes which set a new competition record for first-half shots without scoring in a semi-final was more down to the hosts’ inability to find the net than their opponent’s powers of resistance.

The dozen attempts they made surpassed any other team since the data was first collected in 2003-4, with the closest they came being Thiago Alcantara’s 25-yard effort off the post.

Mane, whose combination with Mohamed Salah looked back to its best, had three efforts, Salah himself had a couple while Luis Diaz cut in from the left to blast a right-footed effort at Geronimo Rulli who unconvincingly claimed at the second attempt.

The movement of Liverpool was incessant and multi-faceted with Diaz tracking up and down the left wing but also dropping inside, Jordan Henderson often playing on the shoulder of the last line of defence and Trent Alexander-Arnold popping up in the number 10 position to win a free-kick 25 yards out, which he hit into the wall.

One move almost produced one of the goals of the season when the excellent Thiago sprayed yet another 50-yard left-to-right diagonal for Alexander-Arnold to hit first-time into the path of Salah whose own volley went over.

And while they reached the interval without scoring – Villarreal’s one chance seeing Tottenham loanee Giovani Lo Celso lob wide from Dani Parejo’s long-range free-kick – there was never the sense that the breakthrough would not come.

Five minutes after the interval Fabinho forced the ball home only to be flagged offside, and Diaz headed weakly at Rulli before a stroke of good fortune brought the 53rd-minute opener.

In a flowing move which started close to the halfway line on the left by Andy Robertson and involved Thiago and Mane ended with Salah playing in Henderson wide on the right.

The England international looked to stand a cross up to the far post only for the ball to take a deflection off Estupinan and float over the goalkeeper and inside the far post.

It was the piece of luck they needed as one quickly became two when Alexander-Arnold combined with Salah on the edge of the penalty area and he slid a perfectly-weighted pass for Mane to poke past Rulli.

At that point it seemed a question of how big a lead Liverpool wanted to take to Spain next week as Robertson volleyed home Alexander-Arnold’s cross only for it to be ruled out for offside.

However, a raft of substitutions followed as Klopp rotated his players with a Saturday lunchtime kick-off at Newcastle to think about as his side’s pursuit of an unprecedented quadruple continues with a return to Premier League action.