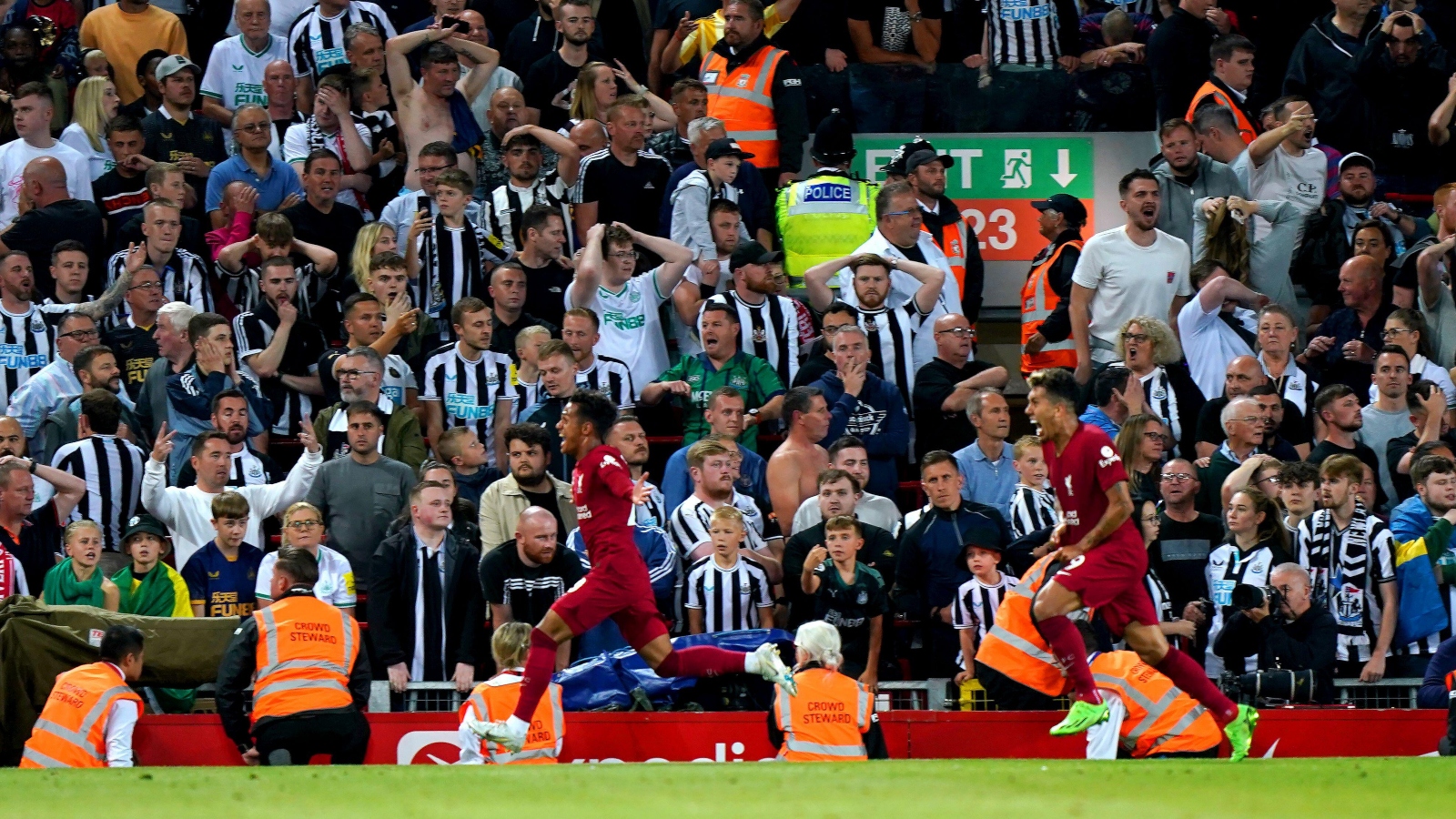 With 98 minutes on the clock, Fabio Carvalho rocketed home a dramatic winner as Liverpool beat Newcastle United 2-1 at Anfield.

Jurgen Klopp’s Reds had been basking in the afterglow of Saturday’s nine-goal annihilation of promoted Bournemouth as they returned to Anfield looking to secure back-to-back victories.

Liverpool managed to do just that but it took a last-gasp strike to do so as summer signing Carvalho turned home in a penalty-box melee to lift the roof off Anfield and seal a memorable 2-1 triumph.

The goal came with the clock reading 97 minutes and nine seconds after only five minutes of stoppage time were shown and tempers frayed between the benches.

While Liverpool celebrated, it was a gutting end for Newcastle given how impressive they had been in frustrating Liverpool on a night when record signing Alexander Isak had the visitors dreaming of a win.

The 22-year-old scored an emphatic first-half strike on his debut and saw the offside flag deny him another, but the Magpies still looked set to leave with a point as the hosts toiled following Roberto Firmino’s equaliser.

But Klopp calls his team “mentality monsters” for a reason and Carvalho struck at the death.

It was a stunning end to a night that had seen Liverpool stutter for large periods.

Eddie Howe’s dogged side had made life difficult from the outset, with debutant Isak blazing over the first noteworthy chance of the evening.

Newcastle were balancing defensive rigidness with the ability to put together threatening attacking moves, including one that ended with Ryan Fraser spinning and striking narrowly over from the edge of the box.

Kieran Trippier slipped as he hit a well-placed free-kick straight at Alisson Becker as murmurs of frustration at times punctured the Anfield air.

Luis Diaz was, as ever, proving a handful and was slipped through by Firmino and rounded Nick Pope, only to go too far wide and fire off target.

A mixture of miserly defending and poor decision making in attack meant that was Liverpool’s best chance of a first half that Newcastle took the lead in four minutes later.

Trent Alexander-Arnold’s under-hit diagonal ball was cut out and Newcastle quickly attacked, with Miguel Almiron pulling Virgil van Dijk out of position before passing to Trippier.

Jordan Henderson got a toe on the right-back’s ball inside but only prodded into the path of Sean Longstaff, who coolly slipped a pass past Fabinho and behind for Isak to lash home emphatically in front of the travelling support.

Newcastle slowed the game down before half-time, irking the majority inside Anfield.

Liverpool began the second half clumsily as they sought a leveller and saw Isak find the net with an even better goal than his thunderous opener.

Shortly after Henderson had seen penalty claims ignored at a corner, Isak burst through and continued to cut back past both Andy Robertson and Joe Gomez before beating Alisson in front of the Kop.

But the flag belatedly went up for offside against Isak – a decision ratified by the VAR and a moment that shook Liverpool into life.

Impressive Harvey Elliott showed quick feet and forced Pope into a save low to his right and in the 60th minute the red hordes were in raptures.

A sweeping move ended with Mohamed Salah playing back for Firmino to hit a first-time shot past Newcastle’s goalkeeper.

Liverpool pushed with renewed intensity for a winner, albeit without much creativity.

Diaz saw a piledriver saved by Pope, who denied him again soon after before Fabinho twice struck off target.

Salah saw a stoppage-time shot blocked by Dan Burn, leading to what would prove to be a crucial corner.

Swung in with hope more than expectation, Carvalho was alert when the ball eventually fell at the far post for him to smash home.