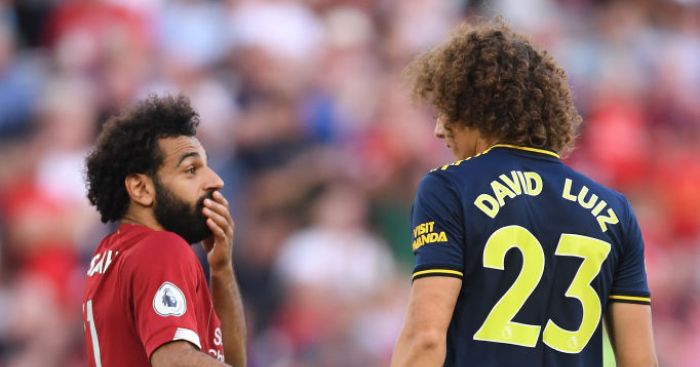 1) ‘It’s a complete nonsense if you don’t view this Arsenal as being one of the best in the country,’ wrote Jurgen Klopp in his programme notes, expressing his admiration for Liverpool’s Saturday evening guests.

His description of the Gunners as ‘one of Europe’s best teams’ was met with a predictably baffled and confused response, with the 27-point gap between these two teams last season still fresh in the memory. It really is easy to be magnanimous in expected victory.

But the ‘one of’ in the German’s appraisal was instructive. Arsenal are, by definition, one of the best teams in England and on the continent: the Europa League finalists finished fifth just three months ago. They really are a great side.

Yet here was a game that emphasised how the gap between ‘one of’ and the plain old best has perhaps never been as pronounced. Manchester City’s failure to capitalise on a similar level of dominance against Tottenham was a freak result: a chasing pack most predicted would be led by the north London sides already looks to be miles behind the pace-setters. The chasm is only getting wider.

2) There is something to be said about Unai Emery choosing death by a thousand crosses rather than letting Arsenal be instantly put out of their misery. Considering their last six visits to Anfield had ended in 5-1 (x2), 4-0 and 3-1 defeats, as well as 2-2 and 3-3 draws, pain was inevitable. The method by which it was administered was the only variable.

Arsenal, so often bereft of any tangible plan in this sort of fixture, at least turned up on Merseyside with a clear idea of what they wanted to do. Were Nicolas Pepe or Pierre-Emerick Aubameyang only slightly more accurate in their execution, it might even have reaped the ultimate reward.

Of course, everybody has a plan until they get punched in the mouth. By the time Arsenal regained consciousness, the damage had long been done. In a way, such a decisive defeat is more detrimental than anything else they have experienced at Anfield over the past few years.

3) There is something wonderfully Arsenal about finally finding the formula before accidentally misplacing it. Their 2-1 victory over City at the Etihad Stadium in January 2015 was held up as proof that they could dress for this sort of occasion, an example that they could adjust and adapt to suit the demands.

Arsenal had 35% possession in that game but maximised their time on the ball. Their three shots on target were carefully crafted rather than long-range snapshots. Their attitude, approach and work-rate was exemplary.

It remains their last win away at a fellow Big Six side. This was their 23rd such match since, and their 15th defeat. A record of 25 goals for and 53 against in that time is woeful.

It is a situation Emery inherited, but also a trend he has failed to buck. Arsenal need to remember how to stand their ground at someone else’s.

4) Alongside “not too cool” and “boom” in a list of Klopp’s favourite words is “rhythm”. And as Liverpool established a new club record for consecutive Premier League wins, it has rarely felt as important during his reign.

Only three teams have ever been on longer runs. No other club currently has more than one straight league win. And after last season was decided by a single point, a lead of at least two, even this early, feels considerable.

There will be so many more twists and turns. Liverpool, five games, three competitions and less than three weeks deep, have done wonderfully to maintain a Champions League-winning momentum. That disastrous pre-season feels awfully long ago.

5) Within five minutes there was an initial warning, a hint as to how this script was to play out. Arsenal filtered the ball back to Bernd Leno after a failed attempt to pass out from defence, and they were met with a first Liverpool wave. Four players – Mo Salah, Sadio Mane, Roberto Firmino and Jordan Henderson – were all stationed in the opposition box at one point as they hunted down the ball, eventually winning a throw-in deep in enemy territory.

It came to nothing. And Arsenal’s resistance would hold strong for almost the rest of the half. But this was a clear statement that Liverpool were going to set the tempo, and their visitors were simply coming along for the ride.

6) Arsenal’s formation only reinforced that theory. Emery opted to stack up his midfield, starting Joe Willock, Granit Xhaka and Matteo Guendouzi in an aggressive, proactive, ball-playing central area. With Dani Ceballos ahead of them, it was a strong spine from a side focused on building through the middle.

The sacrifice was obvious: such a narrow system afforded acres of space to Trent Alexander-Arnold and Andy Robertson, perhaps two of the finest attacking full-backs in Europe. The hope was that they would leave spaces behind for Pepe and Aubameyang to exploit and expose Virgil van Dijk and Joel Matip. The reality was that Liverpool were offered the chance to constantly bypass their weakest area. Arsenal noted the bullseye on their back but were happy to aim around it.

7) The other problem with such an approach is that it demanded constant discipline, impeccable shape and unerring levels of concentration. All it seemed to result in was needless risks in possession.

Arsenal were dispossessed in their own defensive third eight times in the first half. That’s the most by any team this season and the most by Arsenal this decade.

Liverpool are hardly a side that need help pressing the trigger, yet Arsenal showed a familiar tendency to shoot themselves in the foot. Ceballos was a particular culprit, his inexplicable first-half pass across goal finding an unmarked Mane inside the area. His effort was saved by Bernd Leno yet it was a theme Arsenal struggled to snap. It was perhaps the right strategy implemented for the wrong personnel. The problem there is that Emery should know he does not have the players for it.

8) Even then, the amount of space Liverpool’s full-backs were being given verged on suicidal. About ten minutes in, Salah found his run blocked but the loose ball fell to Henderson. The captain sliced a picturesque half-volley into the left channel without even a cursory glance. It was about 15 yards in front of Robertson but there was no Arsenal player in the vicinity; Maitland-Niles occupied himself chasing Mane all game.

It was the first of many occasions that Liverpool played seemingly hopeful passes to the left flank in the knowledge it would find its target. When a player or team produces such moments of instinctive excellence multiple times in one game, it suggests either a heightened confidence on their part or a clear fault on the part of their opponent. In this instance, it was a bit of both.

9) Liverpool still made hard work for themselves. Alexander-Arnold and Robertson almost enjoyed their platform too much, over or under-hitting every cross. The opening goal even came from the former failing to clear the first man and his delivery deflecting behind for the corner from which Matip scored.

Alexander-Arnold ended the game with 13 crosses, three defined as accurate, and six key passes. Robertson made ten crosses, three accurate, and three chances. Arsenal created a combined four chances fewer than Liverpool’s right and left-back. And the funny part is that was by the Gunners’ design.

10) Thank f*** Pepe ‘dribbled past’ Van Dijk to end an infernally ridiculous statistic that was stupid from the moment it was conceived. Everyone can shut up now.

11) Pepe really ought to have scored, of course. The Ivorian managed to capitalise on a sloppy piece of play from Henderson to burst through, using some wonderful footwork to beat Robertson and clear his path for a shot on Adrian’s goal. But the finish was tame, meek and easily saved.

It seems irrelevant now, but the scores were level at that point. A better finish, as with Aubameyang’s early opportunity when he intercepted Adrian’s clearance, would have changed the course of the match entirely. Arsenal deserved to lose for myriad reasons, but fell foul of football’s fine margins in the first half.

12) By the second, with Matip having made it 1-0, it never really felt as though the tide would turn. Liverpool were content with just 43.3% possession after half-time, the predator stalking its prey and lulling it into a false sense of security before pouncing.

Arsenal had one shot from the restart to the 63rd minute, in which time Liverpool had nine and trebled their lead. Therein lies a fine example of this iteration of the European champions: they had less of the ball but more of the opportunities, squeezing the other side out and conserving their energy. Save for the concession of a late goal which will frustrate the manager, it was almost perfect.

13) It was Salah who would put this game beyond doubt, converting a masterful penalty before retiring David Luiz on this hallowed turf. Thirty-two is no age for a professional athlete to be laid to rest.

First came the attempt to undress Salah, then the turning of the tables as his shorts were pulled down by the Egyptian with two simple touches: one to collect Fabinho’s fine pass and the second to knock it around the Brazilian’s compatriot.

Luiz’s booking for the earlier shirt tug meant he could do nothing to stop the freight train, holding his hands up as Salah bore down on goal and finished confidently.

The crimes that would have been committed on Shkodran Mustafi’s person are not suitable for this website, but here was a timely reminder that Luiz is simply a stopgap. Calum Chambers and Rob Holding might even fancy their chances when everyone is available.

14) The performance of Matip on the opposite side emphasised the gulf in quality. Arsenal looked susceptible to any and every attack while Liverpool stood strong.

Even when the hosts seemed to have been breached, their most in-form centre-half was on hand to clear up. The self-fulfilling prophecy dictates that Van Dijk earns the plaudits, but it was Matip who chased down a lost cause to dispossess Aubameyang after Pepe played the Gabon international through.

Arsenal were again victims of football’s changing winds. If Aubameyang had scored, they would have been level early in the second half. That he was not even allowed to shoot is testament to Matip. Joe Gomez faces a fight to retrieve his spot from the man of the match.

15) Aside from a fantastic Fabinho display, Matip and Salah faced precious little competition to be named the game’s best player. That will suit Mane, perhaps its most important, down to the ground.

The Senegalese did not get his goal because he didn’t have to. Three shots and four chances created represent a fine attacking return. But his six tackles – at least two more than any teammate and four more than any Arsenal player – provided the foundation for success. Arsenal were never even allowed to breathe.

16) This is not quite a step back for Arsenal, at least not in terms of last season. The question, therefore, is how much progress they have made since that 5-1 mauling in December.

The scoreline is an improvement. They had less possession, and one more each in terms of shots, shots on target and corners. After such a strong summer investment, does that represent enough of a positive change?

And will Emery be pleased with such comparative passivity? Arsenal committed 13 fouls eight months ago and just five on Saturday. In their defence, it is difficult to impede shadows.