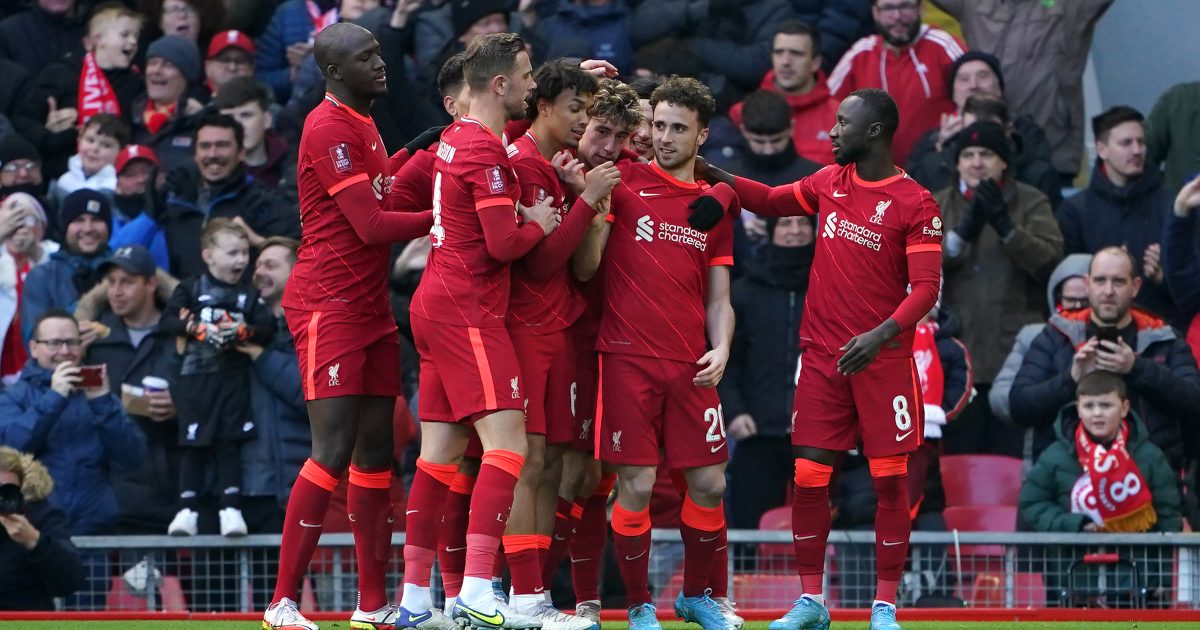 Harvey Elliott scored in his first game back from injury as Liverpool beat Cardiff City to advance in the FA Cup.

While Elliott returned, Luis Diaz made his debut for Liverpool against Cardiff. The winger signed for them in January from Porto for a fee that could rise to £49m.

The new signing made an impact as he played a vital role in the build-up to Takumi Minamino’s goal.

However, not to be outdone 18-year-old Elliott announced his return after five months out with an ankle fracture dislocation with a brilliant swivelled finish in front of the Kop – his first goal for the club.

Cardiff substitute Rubin Colwill scored an 80th-minute consolation for the visitors with a smart finish past Kelleher but a place in the last 16 – and a home tie against Norwich – for only the second time in Jurgen Klopp’s reign was never in doubt.

The only concern came late on when Diaz went down holding his knee after Cardiff captain Aden Flint accidentally landed on him – but the 25-year-old was able to finish the game after treatment.

A late run out for midfielder Thiago Alcantara, after six weeks out with a hip problem, and Africa Cup of Nations finalists Mohamed Salah and Sadio Mane due back before Thursday’s Premier League visit of Leicester means Liverpool’s contention in four competitions is looking as strong as it has all season.

Strong was not a word associated with Cardiff’s team as they made eight changes from Wednesday’s Sky Bet Championship win over Barnsley, including Oliver Denham for his first start and fellow 19-year-old Eli King, with just 11 minutes of senior football in his career.

But it was Liverpool who looked more disjointed as they played like a team who had not had a game for a fortnight.

A thing of beauty from Harvey Elliott 😍pic.twitter.com/Ub9YgkYIBo

Their best chance was their first half after just four minutes when Jota brilliantly nutmegged Denham from Naby Keita’s pass but shot too close to goalkeeper Dillon Phillips.

It set the theme for a first half of poor finishing as, after Minamino’s goal was ruled out for Kostas Tsimikas’ offside, Klopp’s side squandered a number of chances with Curtis Jones, Roberto Firmino and Trent Alexander-Arnold all culpable.

Cardiff had just 19 per cent possession all game but maximised their opportunities and could easily have had a first-half penalty when Mark Harris skipped past Ibrahima Konate out wide only to go down in the area.

Referee Andy Madley appeared to consider the Cardiff forward had unnaturally initiated contact by slowing down and stepping across the path of the recovering defender and VAR did not argue otherwise.

Harris was involved in the second contentious incident moments after the interval when he was brought down by Caoimhin Kelleher 20 yards outside his penalty area.

The goalkeeper escaped with a yellow card thanks only to the proximity of Konate but Cardiff were furious the punishment was not harsher.

Jota’s 54th-minute goal, heading home an Alexander-Arnold free-kick, made things even more difficult and Firmino should have doubled the lead with a header from a similar position – but he could only find the goalkeeper.

Just before the hour Elliott and Diaz were introduced to a rousing welcome before Jota hooked wide what should have been his second goal of the afternoon.

The Colombia international had the perfect introduction as he robbed Perry Ng on the byline as the Cardiff defender dithered on the ball and produced a clever cut-back which was missed by Jota but converted by Minamino.

Colwill’s goal was celebrated wildly by Cardiff’s players and significant travelling support but it was all they had to cheer on the day as the hosts sealed a fifth round tie at home to Norwich on March 2.