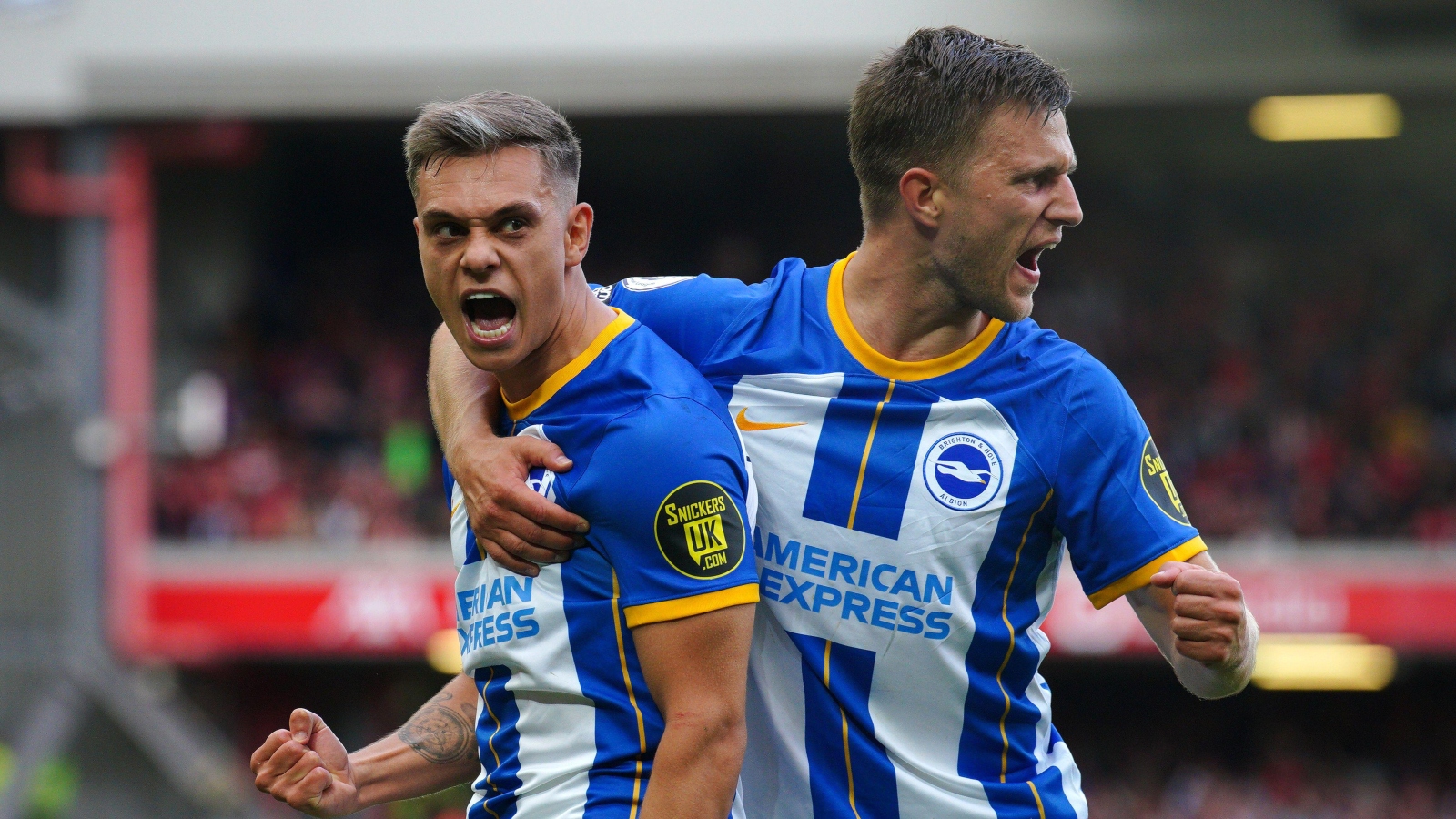 Liverpool’s poor start to the season continued at home to Brighton thanks to Leandro Trossard’s hat-trick for the visitors in an entertaining 3-3 draw.

The Belgian had given new manager Roberto De Zerbi a dream debut by scoring twice inside the first 17 minutes against some ragged defending, only for Roberto Firmino’s double either side of half-time and Adam Webster’s own goal to turn things around for the hosts.

But Trossard was not to be denied his moment in the spotlight as he became only the third opposition player to score a treble at Anfield in the Premier League, following Coventry’s Peter Ndlovu (1995) and Arsenal’s Andrey Arshavin (2009) into the history books with an 83rd-minute strike which poses yet more questions for Reds boss Jurgen Klopp.

Only a month ago his side was conceding four to Napoli in a shambolic performance. And while this was not on that scale, the ease in which they were opened up by a team with a new manager who had not played since September 4 does not bode well, with a trip to league leaders Arsenal to come next weekend after the midweek Champions League visit of Rangers.

All the attention pre-match had been on the form of Trent Alexander-Arnold and his England exclusion, but the opening 20 minutes were not the greatest endorsement of his manager’s impassioned defence of his full-back as Brighton exposed a lack of understanding across the back line.

Alexander-Arnold’s fourth-minute header only reached the edge of the area, and when Jordan Henderson – back in the team after a month out with injury – and Fabinho failed to deal with it, Danny Welbeck produced a clever backheel.

The sight of the Liverpool right-back falling to the turf after slipping as Trossard side-stepped him to fire across Alisson was not a good one.

Welbeck would have doubled the lead had it not been for the outstretched leg of the Liverpool goalkeeper after Thiago Alcantara gave the ball away outside the penalty area, as Brighton swarmed all over opponents giving the impression the recent international break had been two months and not a fortnight.

But lessons were not learned and Alexander-Arnold was again involved in the concession of a second goal when, after controlling a cross-field pass on his chest, he was robbed by Welbeck.

He was then at an immediate disadvantage trying to get across to Pervis Estupinan, with the ball quickly transferred to Welbeck and Solly March for Trossard to fire home his second from a similar position to his first.

The Belgian was the first visiting Premier League player to score two first-half goals at Anfield since Wigan’s Amr Zaki in October 2008, and the loss of Graham Potter to Chelsea last month already seemed a distant memory.

Klopp immediately summoned Virgil van Dijk to the touchline for a mini crisis meeting, and whatever was said produced an instant improvement as Alexander-Arnold started to come into his own in the final third.

His low cross was turned behind by Joel Veltman under pressure from Fabio Carvalho, before Sanchez turned Salah’s close-range shot on to the post.

With Alexander-Arnold effectively operating as an inside-forward, occasionally popping up in the number 10 position, Liverpool began to create some pressure and the breakthrough came in the 33rd minute.

The offside flag went up when Firmino clipped the ball over Robert Sanchez from Mohamed Salah’s pass, but after a VAR review the goal was allowed to stand.

Alexander-Arnold’s superb pass out from the back could not, for once, be matched by the touch of Salah, who lost control inside the penalty area, but the introduction of Luis Diaz for the second half made an immediate impact.

The Colombia international laid on the final pass from a 53rd-minute counter-attack involving Henderson and Thiago for Firmino to side-step his marker and score.

He should have had a hat-trick moments later, only to be let down by a weak header from another cross from Alexander-Arnold, who could not be kept out of the game as he supplied the corner which saw Webster turn the ball into his own net.

However, Brighton were far from cowed and when substitute Kaoru Mitoma’s cross from Liverpool’s right side ran through to the far post, Trossard was on hand to fire home in the 83rd minute.