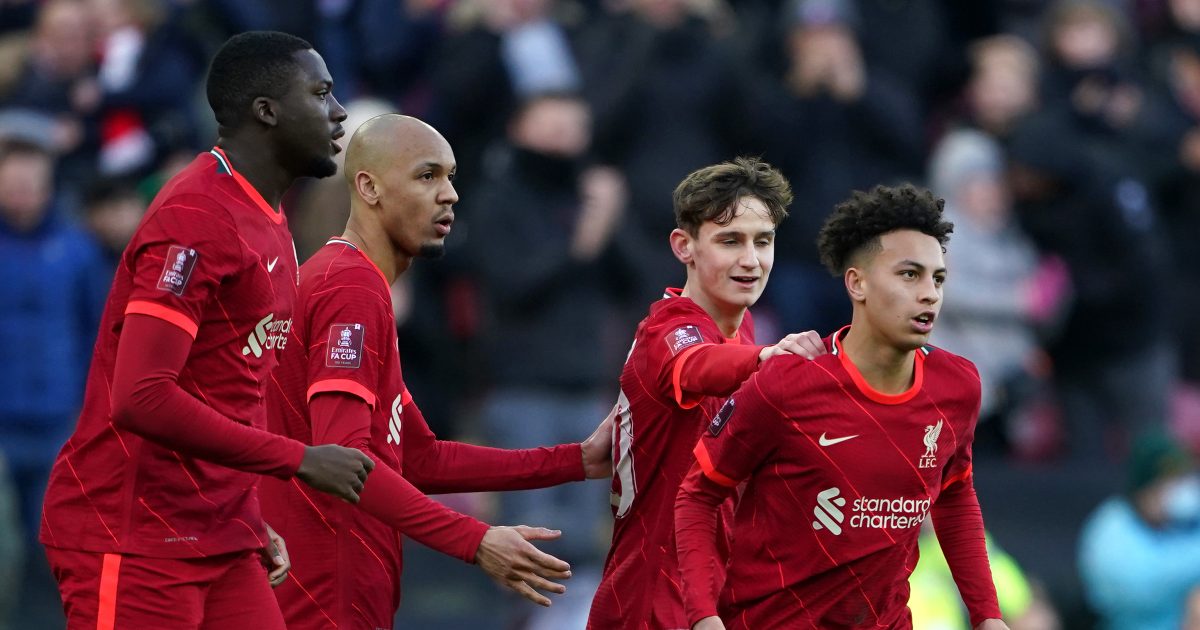 Liverpool came from behind at Anfield to knock League One side Shrewsbury out of the FA Cup on Sunday afternoon.

An upset looked to be on the cards as Daniel Udoh gave Shrewsbury the lead around the half-hour mark.

17-year-old Kaide Gordon made it 1-1 soon after to become the club’s second-youngest ever goalscorer.

Fabinho’s penalty put them in front just before half-time and substitute Roberto Firmino’s backheel and another added-time Fabinho strike sealed their progress.

But it was the quality of Gordon’s goal at the Kop end which stood out as the youngster, an initial £1million signing from Derby a year ago, scored on only his second appearance.

The way in which he controlled the cross into a crowded area from Conor Bradley, another of the five academy players in the starting line-up, and had the composure to turn his body and pick a spot beyond goalkeeper Marko Marosi which belied his inexperience.

Had such a goal been scored by Mohamed Salah or Sadio Mane, both currently on Africa Cup of Nations duty, it would have rightly drawn fulsome praise for its execution and the youngster deservedly received a standing ovation when he was replaced 10 minutes from time having grown in confidence.

Fabinho sending Marosi the wrong way from the spot after Ethan Ebanks-Landell’s strange handball when challenged by Virgil Van Dijk provided the base from which to control the rest of the game.

But it took them 44 minutes to get to that position as the early stages were heavy on possession but lacking in any genuine threat for a much-changed side which had been put together after a Covid outbreak had forced a 48-hour closure of the first-team’s training complex.

Liverpool’s young quintet made up half the outfield complement with Bradley, Gordon, Elijah Dixon-Bonner, Max Woltman and Tyler Morton having 15 Liverpool senior appearances between them – the latter accounting for seven of those.

Van Dijk (14) was the team’s top scorer with the front six players boasting just 12, all scored by midfielders Curtis Jones or Fabinho, between them.

It did not point towards a particularly high-scoring affair so the presence of three first-team regulars in the back four – with Klopp also back on the touchline after his isolation period – offered some degree of security.

Gordon forced the first save of the game, cutting in from the right to make Marosi dive low at his near post but it was the visitors – beaten by a youthful side here in a replay in 2020 – who struck first having weathered almost half-an-hour of not having the ball.

Nathanael Ogbeta found space on the left to cross to the near post where Ibrahima Konate watched it sail past him for Udoh, an injury doubt before the game, to fire home.

Eight minutes later Gordon found the net and the dynamic changed, although goalkeeper Caoimhin Kelleher was required to save Ryan Bowman’s close-range header to maintain the lead going into the interval.

Marosi’s point-blank block to Dixon-Bonner early in the second half kept the tie alive but Liverpool were able to bring on Takumi Minamino and Firmino, scorer of his first Anfield goal in 13 months, to consolidate matters.