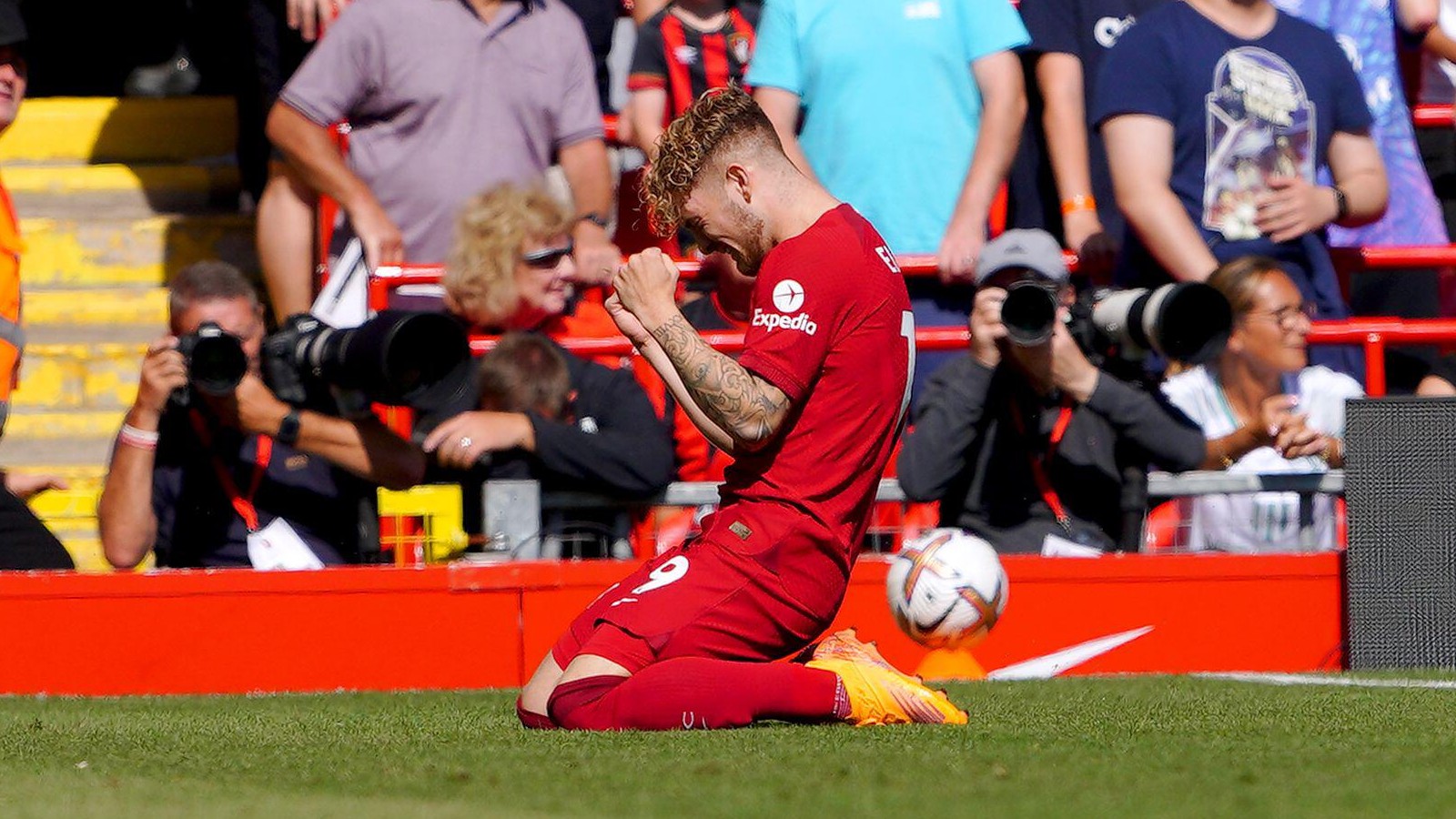 Liverpool scraped their first win of the Premier League season with a nervy 9-0 win over an impressive Bournemouth side.

Scott Parker’s Cherries were unfortunate enough to be on the wrong end of a wounded animal at Anfield as the hosts ran riot in a particularly goal-laden first half.

Luis Diaz and Harvey Elliott put Liverpool 2-0 up after just six minutes, before Trent Alexander-Arnold and Roberto Firmino, who had assisted each of the previous three goals, doubled that lead.

Virgil van Dijk then headed a corner home as Liverpool scored five times in the opening 45 minutes of a Premier League game for the first time in their history.

They threatened to break all sorts of records when Chris Mepham scored an own goal within a minute of the restart, with Firmino’s second strike on the hour setting up a grand finish.

But the Reds had to settle only for equalling the record margin for a Premier League victory, with Fabio Carvalho and Diaz rounding off the scoring with five minutes to go.

The Cherries join Southampton and Ipswich in suffering a 9-0 defeat in the competition.

It was a remarkable afternoon at a rocking Anfield, where Liverpool scored within 150 seconds of kick-off.

Firmino showed intelligence and composure when collecting a loose ball to jink away from danger and clip a cross from the right to Diaz, who impressively headed beyond Mark Travers.

The goal was rubberstamped after a VAR check and Liverpool doubled their advantage in the sixth minute.

Mohamed Salah cut in from the right and Firmino’s touch inside was met by an Elliott snapshot from the edge of the box that flew in.

Diaz saw a goal ruled out for offside and Salah somehow failed to turn home at the far post from Elliott’s cross-shot as Liverpool continued in the ascendancy.

Salah got a shot away and Alexander-Arnold collected a return pass from Firmino, continuing to unleash a thumping 25-yard strike that whizzed into the top left-hand corner.

Firmino would have a goal of his own three minutes later.

Salah’s attempted pass on right flank ricocheted cruelly off Bournemouth’s Marcus Tavernier and flew towards the six-yard box, where Firmino reacted to stretch and direct home.

The visitors were hit by a fifth on the stroke of half-time. Travers pushed a long-range Firmino shot behind for a corner, which Andy Robertson sent in for Van Dijk to power home.

The Anfield onslaught continued after the break as Bournemouth conceded their sixth within a minute of the second half getting under way.

Alexander-Arnold’s cross was directed into his own goal by Mepham under pressure from Liverpool’s Diaz. The goal was given after a lengthy VAR check for offside.

Firmino struck across the face of goal as Liverpool threatened to score again. In the end, they had to wait until the 62nd minute.

Robertson swung over a dangerous cross that goalkeeper Travers parried into the path of Firmino, who turned home a scrappy seventh in front of the Kop.

The 30-year-old received a hug from Klopp as the Liverpool boss made changes, but Salah stayed on in search of a goal that he somehow failed to find from close range in the 75th minute.

Just as the sting appeared to have been taken out of the match, Liverpool celebrated an eighth as Kostas Tsimikas found fellow substitute Carvalho to coolly volley home.

Bobby Clark came on for his debut shortly before Diaz headed home Tsimikas’ corner to bring up nine.