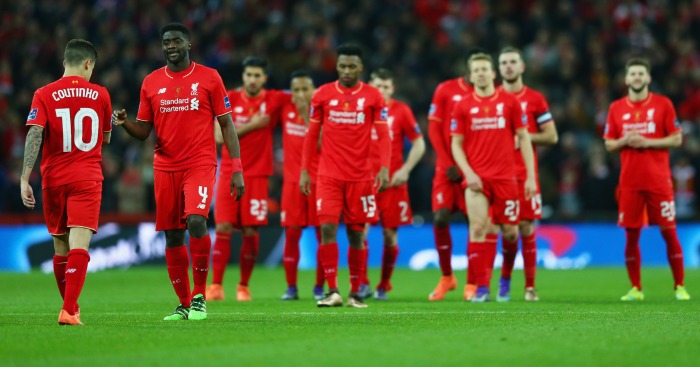 When your best player over 120 minutes is the goalkeeper solely responsible for the opposition’s only goal, it’s fair to say that you have failed to produce a performance worthy of a cup final. Simon Mignolet’s only real competition for that ‘accolade’ was a combative midfielder playing out of position at centre-half. Liverpool’s perceived weaknesses were rare strengths on a day when their lack of real quality was painfully laid bare.

The first 83 minutes with not a single shot on target despite dominating possession against a sloppy Manchester City side will be Exhibit A in Jurgen Klopp’s campaign to make significant changes this summer. Significant not in terms of quantity – his comment that “seven sounds a lot” when discussing Liverpool’s previous summer business revealed much – but significant in terms of quality. This deeply average squad of players needs an upgrade.

Liverpool have a captain who would be a useful squad player at any of the clubs they should be battling for the title; they have a vice captain who was a useful squad player at one of those clubs. Together they do not have the vision and creativity of the man they have replaced as captain and player. Together they epitomise this Liverpool side. Honest, good professionals but not men to build a team around. They are career followers thrust into leadership.

Henderson touched the ball more times at Wembley than any other player on the pitch and yet I cannot recall any of those 107 touches. I remember some enthusiastic pointing, some vehement appealing and some excellent running after Philippe Coutinho when he scored his equaliser, but there’s a gap where memories of a captain’s performance in a cup final should be.

When your ‘leaders’ are so uninspiring, you almost forgive Coutinho for his anonymity before the goal, Roberto Firmino for his fade to grey after a fizzing start, Daniel Sturridge for being infuriatingly wasteful in possession and Milner for simply being Milner. Robbie Savage spoke about Liverpool’s vice-captain in glowing terms as a 7/10 player in a way that only a 6/10 player can. But Liverpool are not a 7/10 club and the fans have a right to expect better.

Firmino, Coutinho and Daniel Sturridge (when fit) are players worthy of a better Liverpool side, while Emre Can will undoubtedly improve under Klopp’s tutelage. But neither Henderson nor Milner will now become better footballers; they have peaked as willing runners, good professionals and all-round good guys. If there is room for both of them in a first-choice Liverpool side next season then Klopp has failed.

After inheriting a flawed squad in mid-season, Klopp was given a free pass that almost ended in an unlikely trophy. He almost succeeded where Brendan Rodgers failed with a combination of enthusiasm, energy and bear hugs; next season he will be judged on his own team’s recovery from extensive summer surgery. Scalpel please, nurse; there could be significant blood lost.