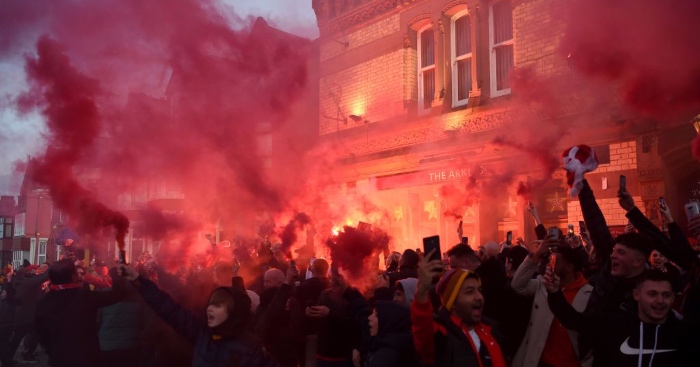 Liverpool are likely to be prevented from winning their first Premier League title at Anfield as authorities have identified “high risk” games that could be played at neutral venues.

The Reds need six points to guarantee finishing above Manchester City in a resumed Premier League season, thus securing their first championship since 1990.

The nature of that wait means ‘authorities are concerned’ about certain games ‘that might lead to fans congregating outside stadiums in breach of social-distancing guidelines’.

Among 12 matches that have been identified as “high risk” would be any home game in which Liverpool could win the title, as well as the Merseyside derby at Goodison Park and their meeting with Manchester City at the Etihad.

Each of those matches, as well as London derbies, ‘would have to be played at neutral grounds’ if that proposal is passed through by a vote during a shareholders’ meeting on June 4.

The Times make it clear that ‘any decision is not meant to be a judgment on the Liverpool fans but a recognition that a title win at Anfield would be a massive occasion for the club in what is a residential area.’

Liverpool ‘remain hopeful’ of playing at Anfield again in 2019/20, but ‘will almost certainly’ not do so in a game that could seal the title, rather in any matches thereafter.

‘Concerns’ have also been expressed over their first home game if they win the title away.