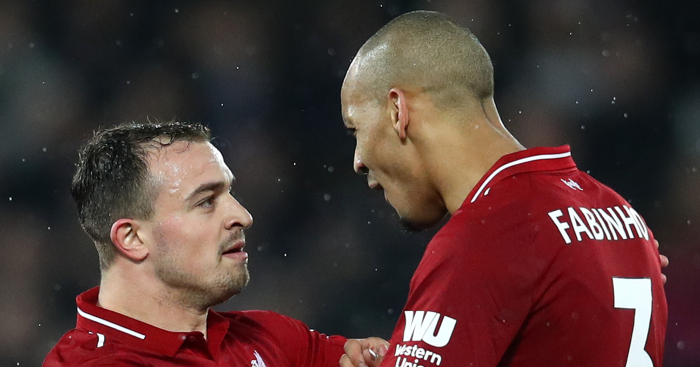 You won’t be too surprised to hear that a certain team in red put three players on this list, or that some of the other top clubs were represented as well. But it’s nice that we’ve got four from teams 14th through 17th in the table. No full-backs this time around, so it’s a 3-1-4-2, which incidentally Neil Warnock used a couple of weeks ago:

Goalkeeper: Neil Etheridge (Cardiff City)
In the most recent shot-stopping rankings, Etheridge was bottom of the league. In fact, his raw number didn’t even show up on the bar graph. Good thing no one told him. Against Watford he made a variety of fine saves, including a strong left arm to block Roberto Pereyra, a dive to the right to keep out Pereyra’s free kick and a super high leap to deny Abdoulaye Doucouré. Would a top keeper have saved Watford’s two long-range goals? Possibly, but that should take nothing away from his overall performance. Came off his line effectively as well. A clear choice at this spot. Speaking of coming off his line, the latest stats show that Ben Foster comes for crosses more aggressively than any other keeper in the league. As Cardiff were pressing for an unlikely draw, he delivered a late, late hat-trick, coming out brilliantly to sweep, punch and claim.

Centre-Half: Mamadou Sakho (Crystal Palace)
A nearly flawless performance against Leicester City. After a solid first half, the Foxes really started to test him, and by the end he was going touchline to touchline to shut off the threats. Jamie Vardy got in behind once, although looking at the video I’m not sure how much was Sakho’s fault. But he recovered quickly enough so that Vardy chose to shoot with his weaker foot, and Vicente Guaita saved. Sakho is one of those players who has a mistake in him most games, but when he avoids the miscue, he’s one of the better defenders in the league.

Hardworking team performance. Got lucky but we have deserved the luck lately. Kelly and Sakho are Hero’s. Two moments of quality won us the game – a stunner from Luka and an amazing save from Vicente! Well done lads. Buzzing #cpfc ❤️💙

Centre-half: Victor Lindelöf (Manchester United)
Had United won the match—not that that was ever likely – we’d all be talking about Victor Lindelöf. I’m going to talk about him anyway, because he marked Mo Salah out of the match. He was beaten only once, when he followed Salah too far up the pitch and got turned. Otherwise he showed how it’s done, whether in a back five or a back four. Let’s file his giveaway under ‘one big mistake,’ and give credit where it’s due.

Centre-half: Ciaran Clark (Newcastle United)
The best of the Newcastle defenders in the win over Huddersfield. Okay, maybe centre-half in a back five against Huddersfield is a cushy job, but with the exception of one soft clearance that caused a momentary worry, made all the plays. Nothing fancy, just good solid defending.

Kurt Zouma had a strong match against Manchester City, frequently coming out to challenge Leroy Sané and generally getting back in time. He finally succumbed in the second half, when Fernandinho made him look average with his weaker-foot cross for Sterling’s goal. I think Zouma is a better all-around defender than Michael Keane, but Keane, who’s a bit steadier, may partner better with the aggressive Yerry Mina. Elsewhere, Willy Boly had another fine match – he was on the list recently for his aerial prowess, but against an attack-minded Bournemouth did a little bit of everything. Teammate Ryan Bennett was excellent in the second half as well.

Like I said, no full-backs, and I’m hoping Liverpool fans will be either too happy or too hungover to target me for assassination. Andrew Robertson was definitely the best of the lot, but for me his performance didn’t quite demand to be included. Lots of good attacking action, not quite enough incisiveness.

Fabinho, Robertson and Wijnaldum outstanding for #LFC today I thought. Huge credit to Clyne too on his first league start since May, and to Klopp for smart and decisive sub. That's seven league goals from subs already this season. Makes a huge difference.

Had there been a good right-back candidate (there wasn’t), he would have made the list. Lucas Digne gets his weekly mention, this time for reasonable defence against Man City plus a great cross for Everton’s goal (and nearly a second assist when Richarlison headed wide). The best of the right-backs was Kyle Walker, who attacked at will but whose defence came up short on two Everton chances.

Deep Midfielder: Fabinho (Liverpool)
I made a bet with myself that at least half the match reports would mention his price tag, as in ‘Fabinho finally showed he was worth his price tag’. I lost, which is why I’m mentioning it here. So forget money and watch the video. An absolute monster performance, for me most impressive of all when he was driving forward. Made the right decision almost every time, and boy, can he pick a pass. Man of the match, and probably many matches to come. Read 16 Conclusions here.

Fabinho was in the last game of the weekend, so someone else was on the list until late Sunday. Who was it? Ashley Westwood, of course. He was amazingly good in the first half as Burnley repelled Spurs, and if he’d been as involved in the second half he would have made the list alongside the Liverpool man. Secure defending, excellent distribution. He completed 79.3% of his passes, which may not be Fernandinho territory, but for Burnley against Spurs it’s fantastic.

Speaking of Fernandinho, his passing was just a tiny bit off the usual perfection, but he continues to up his defensive game, and that run and cross for the assist was something special. That brings his assist total to three, already tied for a career high. Elsewhere, Georginio Wijnaldum ran the show in the second half when United were forced back, and Pierre-Emile Højbjerg had moments both on attack and defence for Southampton, including the outlet pass which led to the winning goal.

A couple more. Opponents Cardiff were supine for the first 80 minutes or so, but Domingos Quina deserves a mention for the long-distance blast and useful passing. Finally, stats man Dustin Ward has classified passes on a football pitch into 50 types, and Philip Billing tried just about every one of them to create something against Newcastle. The result you know, but he showed he can take command in Aaron Mooy’s absence.

Winger: Sadio Mané (Liverpool)
Oh, that chest-trap and volley. The rest of the show was pretty good too, with hard pressing and superb dribbling. I was surprised to see he has only one assist this season, but the way he dropped Ander Herrera and set up the second goal was worth about four by itself. That goal was perhaps the most important of the season so far – and as the rest of the side goes bonkers in celebration, he casually jogs to join the crowd. Cool, man, cool.

Winger: Henrikh Mkhitaryan (Arsenal)
Despite the loss, his best match in an Arsenal shirt. Southampton’s press left lots of space, and that’s Mkhitaryan’s game. The second goal was flat-out lucky, but the first most certainly was not, and it was backed up with outstanding passing to Bellerin on the wing and everyone else on the counter. His through ball to Aubameyang should have netted an assist, and he played some genuine defence as well (four interceptions, doubling his season total). Not sure he’ll be the man for every situation, but this was an outstanding showing.

Mkhitaryan didn’t have a good performance since his debut with 3 assists and he decided to turn into prime Zidane now that we’re missing 4 starting defenders. What a lad

Raúl Jiménez was on the list at winger until Sunday. With Morgan Gibbs-White as a false nine, he played primarily from the wing until a late substitution put him back at central striker. A goal and some really fine movement and passing. Wolves have now won two out of two with this system, and Jiménez always finds a way to cover every blade of grass.

Attacking Midfielder: Roberto Firmino (Liverpool)
No goals or assists, but sometimes luck and David De Gea are against you. From the kick-off he looked very much in the mood – in fact, he may have been keyed a bit too high. More than once he forced a shot when there were better options. But this was the Firmino we’ve been missing, all-action and at the heart of the attack. Just in time for a title charge.

Attacking Midfielder: Eden Hazard (Chelsea)
Let the record show that Dale Stephens won the ball cleanly from Hazard in the 52nd minute. I bring it up because he was the guy left in the dust on Hazard’s breakaway goal. In fact, the Belgian had a fairly ordinary second half, failing to connect on a sure scoring chance and losing possession a few times. But he was pretty awesome in the first 45 (could he possibly have known Pedro was going to arrive at the back post?), and no one else stepped up to take his spot. And yes, I know he was a false nine, not an attacking midfielder, but there were two real nines already on the list. And the greatest false nine will always be James Milner.

Striker: Gabriel Jesus (Manchester City)
He started the game rather slowly, often looking static as his teammates looked to make the pass. But before long he was coming back to meet the ball the way Pep likes it, and Michael Keane couldn’t get close enough. He’s here for the two goals plus the pass in the build-up for the third, but just as encouraging was his movement in attack. He fits fine.

Striker: Danny Ings (Southampton)
Right now Mark Hughes is telling himself that if Ings hadn’t been injured, he’d still be in a job. Maybe, but Ralph Hasenhüttl would still be a much better manager and more fun to watch on the touchline. You don’t really think of Ings as a header, but he now has seven headed league goals, more than one-third of his overall total. He seems just the man for Hasenhüttl’s high-octane system, and when he gets back to fitness could deliver on a regular basis.

Nipped at the wire was Gerard Deulofeu. Through most of his career, and most of this season too, he’s been as frustrating as any player on the planet: lots of talent and endeavour, not much judgment. Against Cardiff we saw a Maguiresque mazy run and goal, but also intelligent and incisive passing and movement. He lost an assist on one of Neil Etheridge’s saves, too. And watch the video: it’s his deflection of Sol Bamba’s pass that helps Watford get possession and start the build-up for his goal. Very nice.