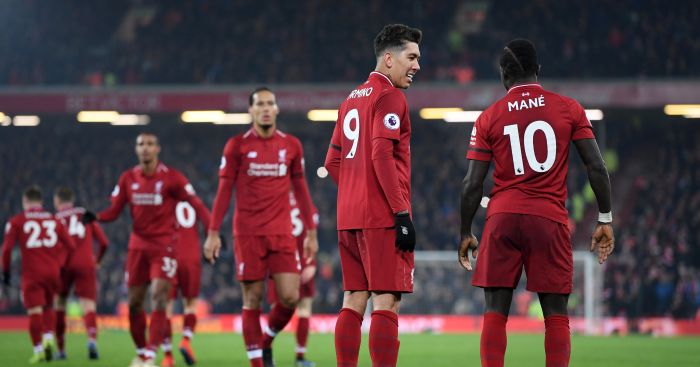 Let me illustrate. Every team they play is missing key players at that particular time, and/or is out of form. They played Spurs when we were shit, & still need the ref not to give Spurs a last minute penalty, to win.

They played Leicester away when Vardy was missing. They played Arsenal when their ENTIRE first choice defence was missing, & still needed a fluky deflection & two dubious penalties to beat them.

They played Man Utd when they were abysmal, just before Jose was sacked, & even then they scored with 2 jammy deflections to win.

They scored with possibly the jammiest goal in PL history, in the 96th minute,  against a superior Everton.

They needed a needlessly committed penalty to beat Brighton, & have just cheated & fluked their way past Palace, who were missing their 2 FIRST CHOICE keepers, & had to play the ancient Speroni in goal, who duly gifted them 2 goals!

Not to mention two more kind deflections, & a blatant hand-ball by Robertson, for the decisive 4th goal. Compare & contrast that to the Newcastle v Cardiff game yesterday, when Rondon, in a very dangerous position, kicked the ball out of play because a Cardiff player lay injured on the floor.

Salah is diving at every opportunity to win penalties, & all we hear from the media is praise for Liverpool.

I do not know a single “neutral” who wants Liverpool to win the title.  They say “luck evens itself out over a season”.  If that’s true, Liverpool are in for s**t load of bad luck in the remaining 15 games.

I started out not wanting City to retain their title, but am now a converted “blue”!

My beloved Spurs will not win anything this year (again!), but if they beat Liverpool when we go to Anfield in March & deny them the title. I’ll be overjoyed!
Fred, London

In response to a mail sent by Richard an Arsenal fan from Bristol, I got a few counter facts but I must confess, i’m not that well versed with football history. Also, as he’s mentioned all these counter facts might have been posted earlier so I apologize before-hand for writing them down without crediting.

If Anelka was not offside against Man u in the famous fa cup semi final in 99 then the treble wouldn’t have happened. It would have haunted us for time indefinite.

If John terry knew about his own statistical chances of slipping when hitting a penalty then Avram Grant would have been the first Israeli manager to win the champions league. It would have also been a statistical masterclass for winning a penalty shoot-out for all times to come.

Own your allegiances
Good morning from Germany! I’ve been following this website almost as long as I’ve been following football (01-02) but I’m slightly disheartened that certain biases have, over time, crept into the literature of the authors/journalists. I think that having such a bias is (overall) honestly good for the website because it adds character to the writing.

However, I propose that you, the F365 authors start owning their allegiances in the articles you write by: (1) identifying who you support somewhere; and (2) referring to the club(s) you support as “we.” Like you do in normal conversation, i.e., “I hope we win the title,” or “Our striker is better than Huddersfield’s.”

This serves to add some perspective in a very transparent way. You own your bias and give context regarding your opinion. It may also encourage some writers to communicate more neutrally. Unfortunately, this likely won’t happen because transparency is slightly scary.

Liverpool – not all that
Dear Football365,

*The greatest glory in football is always found in glorious failure.  Fans of the big clubs will never understand this because for most of them their only means of finding happiness through football is when their team wins.  If all supporters approached it like that then football would be a complete waste of most of our time and money.  While Liverpool emerged victorious and Crystal Palace ultimately have no points for all their efforts, headlines such as “Liverpool win thriller” and “Liverpool survive scare” are, in a roundabout way, compliments for the Eagles for their part in the encounter.

*This was a game where backup players were forced into the spotlight, and didn’t give the best account of themselves.  Palace found out last Monday that neither Vicente Guaita nor Wayne Hennessey would be available for the trip to Anfield, which meant that Julian Speroni would be between the sticks for his first appearance of the season.  He made some good saves but also made two errors that led to goals – you know, the way players are prone to doing if they haven’t played a competitive game for a while.

On the other side, Liverpool will do their title chances a world of good by not picking James Milner at right-back anymore.  He had a shocking game and almost cost his team.  Against Wolves in the FA Cup, he took an early yellow card for a needless cynical foul.  At the time, it looked like he was sending a message to the young defenders behind him that he was protecting them, but looking back it seems like poor judgement.  Similarly, his two yellow cards were both for Watford-style challenges he seemingly committed for the Watford-style fun of going through someone rather than because he needed to prevent a scoring situation.

*The main lessons Liverpool can take from this is that they do not have to play especially well to win, and that Palace highlighted their biggest flaws.  They conceded some very poor goals – the second goal saw an unmarked James Tomkins given a free header from a corner.  There was little in the way of obvious blocking off or dark arts, he was just completely unchallenged.  Likewise, Max Meyer’s goal was after the result was beyond doubt, but the amount of space he had in order to pick his spot will concern Jurgen Klopp.

*Palace’s first goal was a thing of wonder.  It started deep in their own half, with Tomkins and James McArthur appearing to play themselves into trouble against Liverpool’s high press.  However, McArthur created just enough space for himself to pick a pass to the left wing that took five Liverpool players out of the equation.  Until they could rejoin play, the Eagles had a seven v five counter-attack.

*Teamwork of the weekend: Palace’s response to Mo Salah diving.  Mamadou Sakho cleared the ball while Luka Milivojevic berated the Reds ace for his shameful conduct.

*Next up for Crystal Palace – after a game against Spurs likely to provide Roy Hodgson with the perfect excuse to play the reserves and bow out of the competition – comes a very important run of Premier League games: Southampton (A), Fulham (H), West Ham (H) and Leicester City (A).  Four matches that it would be reasonable to expect a decent haul of points from, which is why the Eagles seem incredibly likely to lose all four.
Ed Quoththeraven

I understand that you need to keep the Liverpool fans onside because upset them and the mail box doesn’t stop being harassed ( Net transfer spend, scouse economics) but really, Liverpool are not drifting true, they are scraping by, deflected goals, penalties and keeper howlers are currently  the top 3 votes in the Liverpool player of the year awards.

City didn’t play well against Huddersfield, but stretched out the goal difference by another 2 but hey yep we are drifting.

I would say we are both doing enough just now, but we look to be tightening up again and scoring, whereas they are just scoring 1 more than the oppo.

Just how are Arsenal fans supposed to react when one of our players makes such a pass?! Should gooners sit in silence or even boo Ozil?

You didn’t expand on your point, Stewie – I’m genuinely interested.

You see I’m of a mind to cheer when anyone in an Arsenal shirt makes a great pass, tackle or scores a goal – have I been doing fandom all wrong over all these years?!
Graham Simons, Gooner, Norf London

Negative into a positive
As many probably remember, Koulibaly, the Napoli CB, was racially abused by Inter Milan fans recently. As a punishment, Inter were supposed to playing in an empty stadium when facing Sassuolo last weekend.

However, Inter officials convinced the authorities to let them distribute 11,000 tickets to school children. I just think this is a great example of something hateful and negative being turned in to a positive (although it obviously doesn’t punish those guilty, which is another story). I don’t have much to add, but just think it is a great idea, and should be used more often, instead of simply having no fans at the ground.
Jack (Bloody love Rashford) Manchester

Heart palpitations for at least 20 mins a game?

What you’re experiencing is entirely normal. It’s Liverpool 2015-2018 Syndrome. The unpredictability of an enigmatic team with a talented coach that dares you to dream when you know you shouldn’t. Stay patient. Stay loyal. Give it a couple of transfer windows (if you’re allowed any money tbf), and things will get better. Word of advice – don’t sign Loris Karius.
Lee (All you need is the next Van Dijk), LFC

Pro Evolution Master League – Jorginho
Jorginho reminds me of when you start off in the Pro Evolution Master League with 11 default players. Guys like Ximelez, Duffy, Castillos and Dodo.They lead you to promotion and the opportunity to draft in Zidane, Scholes, Keane and Pires. And before long you have no default players in your team but you still play one or two because they were great in that promotion season and the affinity is still strong even though it’s quite clear that every passage of play breaks down once they get the ball as they are too limited in this new world. Before long you put them out to pasture for good as they are tempting you to pour your tea over the console. Again.
Jorginho is Dodo. Honest player but painfully out of his depth in the fast paced Premier League. He even runs like a default setting player. He has that weird running gait that looks ridiculous when next to a top class athlete. Sarri obviously loves him as he helped him get his promotion to the big time but they won’t be around next season as they’ll miss out on top 4 and they won’t win the Europa League ( Napoli and Ancelotti have that in their sights.A Napoli team certainly not missing Jorginho.)
Jorginho looks good against Burnley and PAOK in the Europa ( his level)  but if you want a midfielder to lead you to the main trophies then Dodo is not your man. Regista? More like a barista.
Rob Melia