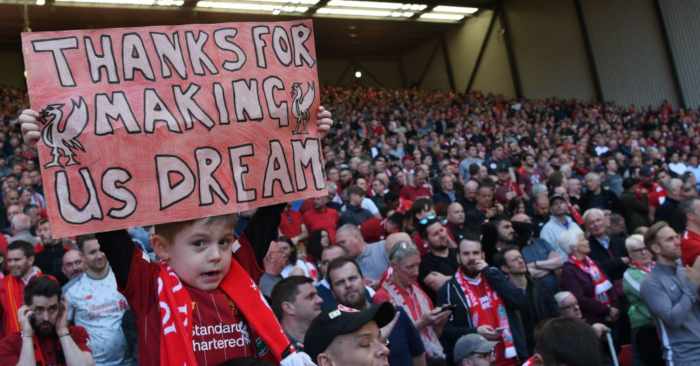 After taking the title race to the final day of the season before ultimately falling short, Liverpool are looking ahead, not just to a European Cup final but to future challenges in their ongoing quest to win the Premier League.

They ended the season one point behind Manchester City, but also as the only side anywhere near them. Twenty-six points separated the Reds and fourth-placed Spurs, who they meet in the Champions League final next month.

City should and will be celebrated as deserving champions, but this Liverpool side racked up a points tally which has only been bettered twice – by City this and last season. It’s also the best win percentage in the club’s history, and the first time in 39 years that they have remained unbeaten at home for two consecutive seasons.

There is a list of impressive stats, all demonstrating that Jurgen Klopp is building something at Anfield. And unlike Liverpool’s last tilt at the title, under Brendan Rodgers in 2014, this structure is here to stay. At least the Premier League had better hope so, or this City side could become England’s Juventus, Paris Saint-Germain or Bayern Munich, riding unhindered to league title after league title.

This is not a slight on City, who have built impressively themselves, but they would also admit that the competition provided by Liverpool this season has been for the good of themselves and for the league.

In the Champions League last Tuesday Klopp’s side were in control of their own destiny, and despite a bleak outlook were able to triumph in spectacular fashion. This weekend the glory was out of their hands but they still had to play their part or there would have been no chance of a second miracle.

Their opponents, Wolves, have been one of the standout sides in the Premier League this season, and going into this game had taken 16 points from 11 games against the top six. Anfield eyes were on a City slip up at Brighton, but there was perhaps even more potential for dropped points here.

As the Liverpool players came out for their warm-up they were greeted by a huge roar, a noise only eclipsed by that which erupted as they emerged from the tunnel prior to kick-off.

A matter of days ago these players and fans were celebrating the greatest European night in the Anfield’s history. Domestic success on top of that would put them in dreamland and make for a summer-long party which would continue into next season.

It was unlikely, but possible.

A wave of emotion rippled around Anfield on 25 minutes. No-one knew exactly what had happened, but at the same time everyone knew what had happened. There is no feeling in a stadium quite like everyone suddenly realising that something momentous has happened elsewhere: the uncertainty, the hope, and in the end the realisation.

Glenn Murray had scored for Brighton.

It must have affected the players – it was tense enough in the stands. Nerves were shredded as 29 years of waiting for a league title came to a head for a manic couple of minutes.

The hope soon faded. Sergio Aguero and Aymeric Laporte had scored for City and what was expected to unfold prior to the kick-off finally came to fruition. There would be no Champions League drama in the Premier League.

“We shall not be moved, just like the team that’s going to win the European Cup…” sang the Kop. Therein was a reminder that there is something else to play for and that this Liverpool team, one of the best in the club’s illustrious history, can still end a remarkable season with silverware.

Liverpool want City’s league title and City want Liverpool’s European pedigree, so the ambition and quality of both these sides should make this a competitive rivalry for years to come. It’s a rivalry which is vital for the Premier League.

A feelgood factor returned to Anfield late in this game when Mane added his second courtesy of another Trent Alexander-Arnold assist. Alex Oxlade-Chamberlain entered the fray, continuing his comeback from injury, before the players completed their customary end-of-season lap of the pitch after the final whistle.

“You’ll Never Walk Alone” rang out around Anfield as it had on Tuesday, but there was a different feel to the anthem this time: one of hope rather than celebration, the lyrics feeling more literal.

Fans remained in Anfield after the final whistle, and it was the last chance many will get to support their players before they head off for the Champions League final in Madrid.

Most of these fans have never seen a better Liverpool team, and that the rest will even compare it with those all-conquering sides of the ’70s and ’80s goes to show how special this group is. Despite Sunday’s relative disappointment, that feeling will linger.

James Nalton was at Anfield and is on Twitter