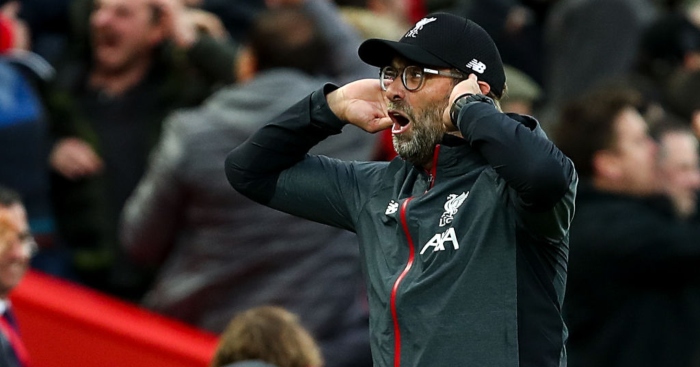 Title fight
Considering the reaction to the last weekend in which Liverpool won and Manchester City lost was to ask ‘WAS THIS THE DAY THE POWER SHIFTED?’ and suggest that Pep Guardiola congratulating his rivals on winning the title was some sort of ‘dig’, Mediawatch was particularly interested in, well, watching the media on Monday.

The Sun resist the urge to lay it on too thick, save for describing the two-time reigning champions as ‘flops’, because that is their new favourite word.

The Daily Mail only go so far as to say that City’s chances of reclaiming the crown ‘are looking increasingly bleak’. And they really are.

But the Daily Mirror go ever so big. David McDonnell was at the Etihad Stadium and wrote this:

‘The prospect of Liverpool surrendering such a commanding advantage is remote, even at this early stage of the season, with City wholly unconvincing in their pursuit of a third straight title.’

It would be ‘remote’ had Liverpool not literally surrendered a similarly commanding advantage just last season.

And City were ‘wholly unconvincing’ against Wolves, sure. But they did also almost break the record for the biggest ever Premier League win less than a month ago. They’ve been rather good more often than not.

But chief sports writer Andy Dunn goes so, so much further.

His first two paragraphs: ‘The eight-point chasm is not even the main issue. The reason Manchester City will not successfully defend their Premier League title is they do not have a defence worthy of champions.’

And his final two paragraphs: ‘If their attacking stock has a rare day when it fails to yield dividends, there is always the glaring danger the cobbled-together backline will cock up. And that is why City will lose their crown.’

This is no prediction, guess or estimate. These are will nots and do nots. Dunn is absolutely certain.

Much as he was back in December of last year when Liverpool went ten points clear of third-placed City, albeit having played a game more, after beating Arsenal 5-1:

‘Here is the frightening thing. Here is the reason why the long wait will, more than likely, be over in less than five months’ time.’

Here is the frightening thing: these exact two teams were in the exact same position last season, and people were made to look rather silly then. There are 30 games left, Liverpool play ten games from December 4 to January 1, and City could theoretically be four points ahead if results go their way and they beat Liverpool on November 10. It is admittedly unlikely, but still.

Liverpool are clear, obvious and deserved favourites. But maybe stop crowning Premier League champions before the turn of the year?

Echo chamber
Even Sky Sports get in on the ‘title race is over’ action. They aren’t stupid.

The top story on their football homepage – and their No. 1 ‘trending’ article – is the same:

For a usually measured, considered and thoughtful pundit, that seems out of character. Thankfully, there’s an entire video that shows him struggling to stifle a smile because he’s clearly taking the piss, before pointing out that “there’s 30 games to go”, injuries to key players could change everything, and “there is a long way” before the season is over.

And don’t Sky Sports themselves know it. ‘Neville may have only been half-serious in his assertion that Liverpool can’t lose the title from here,’ they say.

Still, you got your clicks. And gave life to the following headline over at the Liverpool Echo:

Calamity pain
Now over to Dominic King at the Daily Mail:

‘In normal circumstances, a point against Leicester would be acceptable. Rodgers is building a progressive and attractive side, one that will finish in the top six.

‘But this is the face-off in which neither rival is expected to blink, so a Liverpool draw would have felt like a calamity.’

Increasing their points gap to six after eight games ‘would have felt like a calamity’? Erm…

Simon says
But Simon Jordan is not one to be out-hot-taked. He described Daniel Sturridge as a “divisive influence” and David Luiz as a “show pony” last month. Both have Champions League winner’s medals, much like the apparently arrogant Jurgen Klopp.

Pot: "That kettle there is black." pic.twitter.com/UNOwqASI4R

“Is he becoming infected by the disease of arrogance?” he asked talkSPORT.

‘What would it f**king matter even if he has?’ retorts Mediawatch.

“I’ve noticed a slight change in Jurgen Klopp, in the language and robustness of his position,” he continues.

“I thought his post-match interview was very brusque and irritable, and I know that journalists can drive you mad with ridiculous questions, in his explanation of Salah and what happened to him.

“I didn’t see him complain about what Trent Alexander-Arnold had done to molest a player by dragging his studs down the back of his Achilles.”

When he did what?

“He was very aggressive and on the front foot about what happened to Salah.”

Because he was injured by a dangerous tackle from a player who has previous. Funny, that.

“I’m just wondering, part and parcel of the appeal of Klopp that’s gotten him away with certain things over the last two-and-a-half years – before he won the Champions League he was a perennial final loser for Liverpool – and I’m now looking at him thinking, ‘you have now won something for Liverpool, are you changing your demeanour?’

“There was a mesmeric million dollar smile that brought all aspects of the media to be a universal admirer of Klopp.

“But is he changing? Is he becoming infected by this disease of arrogance that lots of football managers get?”

a) What are you on about?

b) So what if the reigning European champion who is eight points clear in his domestic league at the beginning of October is a little ‘arrogant’? He has the right.

Rash decision
The Manchester United post-mortems are, of course, more or less completely justified. But Neil Ashton just couldn’t help himself in The Sun:

‘Marcus Rashford loses interest too fast, on the periphery when he realised he would not get much change from Jamaal Lascelles and Fabian Schar.

‘Incredible as it sounds, they actually looked like a decent central defensive pairing.’

A couple of things, Neil:

a) Did Marcus Rashford really ‘lose interest’? Or was he just horribly isolated on his own up front for a team that created almost nothing in 90 minutes? And also lacking confidence and probably not match-fit after being rushed back from injury?

b) ‘Incredible as it sounds’, Newcastle’s record when Jamaal Lascelles and Fabian Schar both started during the 2018/19 Premier League season was: P17 W9 D3 L5 A14. They kept seven clean sheets. They beat Manchester City.

It’s almost as if they are a very solid partnership when coached properly.

On an unrelated note, wasn’t it refreshing to see Steve Bruce say “they’ve played a certain way and that certain way has been drilled into them” by the previous manager last week, and that “we have to start with that again. If that’s the way they play, I understand that, that’s what we’ll do”?

Garth raider
As is customary, here are Garth Crooks’ best bits (oo-er) from his BBC Sport team of the week:

‘As bad as Tottenham were against Brighton, this game could have finished 4-4 had it not been for the brilliance of Mathew Ryan.’

How would Tottenham have scored four goals from three shots on target, Garth? And don’t say Lewis Dunk would have scored an own goal; you’ve picked him, too.

‘It is Milner’s coolness under extreme pressure that is so impressive and should Liverpool lift the title, he is a player that can seriously be considered for the Footballer of the Year award, if only for his service to the game. Or should that be an OBE?’

There are no words.

‘It was the great Jimmy Greaves who said that football is a funny old game. Well, who would have thought that Chelsea fans would be chanting the name of Tammy Abraham in the same manner they used to celebrate Didier Drogba.’

Worst headline of the day
‘What’s the Traore…mourning glory?’ – The Sun.

Recommended reading of the day
George Caulkin on Steve Bruce (£)