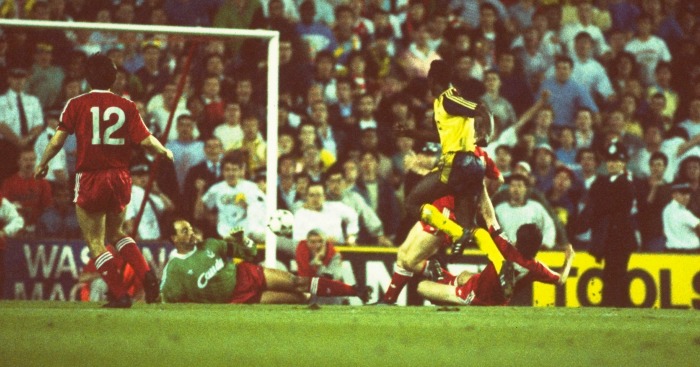 Mailbox regular Adonis Stevenson re-lives 1989 and the tightest title victory ever. It still provides comfort to Arsenal fans in 2016…

“Thomas, charging through the midfield. Thomas. It’s up for grabs now! Thomas! Right at the end!” These words will forever be etched in the memories of Arsenal fans in their 40s or over.

Leicester winning the league this season was a miraculous thing and the most surprising end to a campaign, but not even close to being the most exciting. The Foxes strolled to the title with relative ease, with two whole games remaining. The accolade for the most thrilling end to the season will always rest with the Arsenal team of 1989. A young team with only one championship-winning player in their squad had to go the home of the champions to take on a behemoth that had won the league in nine of their previous 13 attempts. Not only did they have to win but to overtake Liverpool, they needed to beat them by two goals. At Anfield. Back when it was an actual fortress.

As a young fan who was just starting to get into football at the time, any small bit of information was like finding a gold nugget at the bottom of a sifting pan. Information was scarce back then. It’s not like 2016 where you have everything at your fingertips; I could probably find out what time Sergio Aguero has his morning constitutional if I was so inclined.

These days you know the likely line-ups 24 hours before a game has started and the actual line-up at about the same time as the ref because of the internet. Back then, aspiring football fans only had newspaper back pages as well as Shoot and Match magazines, which were mostly filled with puff pieces as well as the odd bit of useful injury news.

Being an armchair fan was very different. If the match you were interested in wasn’t on TV (and you weren’t going) then it was all about the Teletext. You haven’t watched a football match until you have watched it on Teletext. None of this live text updates every minute or two, sprinkled with snappy Twitter banter. This was a page with the scores of three or four of the active matches that cycled every minute or so to the next set of matches. If someone scored, the scorer’s name and time of the goal would appear. As you can imagine, in the days of George Graham’s Arsenal, there wasn’t a lot of action, but we would sit there waiting for the scores to change. Life was simpler back then.

So it was with great interest that I waited for the Arsenal line-up, revealed on TV a few minutes before kick-off. Back when players wore numbers one to 11, Arsenal’s number ten for the night was Steve Bould. Yes, that Steve Bould. Five defenders in a game we had to win by two goals? As a 17-year-old with very little understanding of football tactics, strategy or formations, it seemed like madness to me. What the hell was George Graham thinking? You see, part of not having the overload of information and stats we have now is that I didn’t really know much.

I have since found out that the plan was to go in 0-0 at half time, nick a goal and put Liverpool on edge. If we had got a goal before half-time, it would have enabled Dalglish to make more attacking alterations at half-time. A plan which worked to perfection.

Alan Smith headed in from a free-kick ten minutes into the second half and then we had a couple of decent chances but failed to take them. At 89 minutes there was a stoppage and Steve McMahon got word from the bench that there was only a minute to go and urged all his team-mates to concentrate for just one more minute. Play resumed, we pumped the ball forward and Alan Smith nodded it down for an onrushing Michael Thomas. He was surrounded by three players so there was no real danger, except he miscontrolled it and somehow found himself with just the keeper to beat. With defenders bearing down on him, he seemed to wait ages to shoot. Just shoot, Michael. Why won’t he shoot? Whenever I watch it again, I’m sure he’s going to get tackled before he can shoot but he always somehow manages to scuff it in.

Then he was writhing around on the ground, not really knowing how to celebrate because the emotions were too big to process. I didn’t see any of it at the time though because I was too busy running around the house screaming “I am the champion” while my Liverpool-supporting brother was in tears on the sofa.

You’re never going to have the top two playing each other in the last game of the season and then a goal scored in injury time to win the league. You can have your “Agueroooo” moments, and that was truly exciting, but he didn’t do it against Man United at Old Trafford.

Tragically, it was the year of Hillsborough and everyone in the country wanted Liverpool to win because of this and rightly so. It meant that at the final whistle, there was one of the biggest collective turnings-off of TVs the country had ever experienced. Although I’m pretty sure a whole host of England penalty shoot-out performances since then have smashed that record.

Liverpool played for the draw which was probably the right move. They had just won a draining cup final which had gone into injury time after playing a load of extra fixtures to catch up after their missed games due to their Hillsborough mourning period. It just didn’t work out for them this time.

So much emotion resting on one match and an unlikely deciding goal in the final seconds to win the league on goals scored. Not goal difference, that was the same – goals scored. The tightest of margins and the most exciting finish that will never be matched.