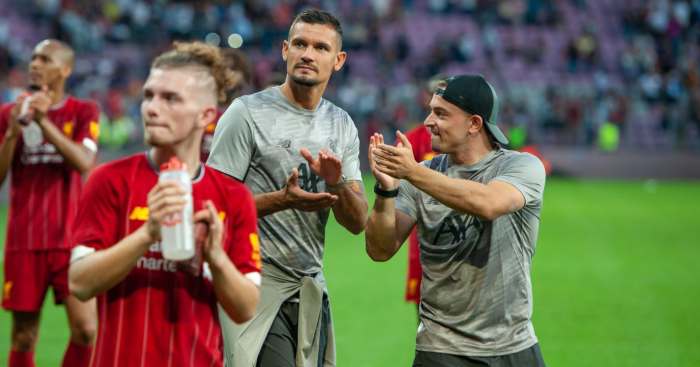 Liverpool could alter their clear-out plans in order to avoid going into the transfer market this summer, according to reports.

The Merseysiders have a number of players who were set to leave the club this summer with one big name in particular set to depart at the end of their contract in June.

With the Premier League currently suspended indefinitely due to the coronavirus pandemic, and no idea when it will be safe to resume games, some players’ futures are up in the air.

The economic impact of the coronavirus on football will be felt for years to come with the Liverpool Echo claiming ‘several players at Liverpool, whose futures it seemed was fairly straightforward, could now face a change of plan.’

Adam Lallana is one player that looked set to leave this summer when his contract runs down – having been linked with Leicester and other clubs – but the report says ‘there is the possibility that he could remain at Anfield should Liverpool offer him a contract extension’.

With other clubs not able to lavish money on wages in the next transfer window, Lallana ‘might reconsider and choose to stay at Anfield for a little longer’.

It was anticipated that Dejan Lovren would be on his way out too with Liverpool well-stocked in that position, while a reported move to Roma broke down last summer.

The Liverpool Echo adds that the Reds ‘might feel keeping him is the best option’ if they can’t get a decent fee for the Croatia international.

Liverpool had valued Xherdan Shaqiri at around £28m when talk came of him leaving in the summer but the Reds will ‘likely struggle to get a sum close to that’ now.

And the report continues by throwing Harry Wilson’s name into the mix as a player that could now stay with the club at the end of his loan spell with Bournemouth.