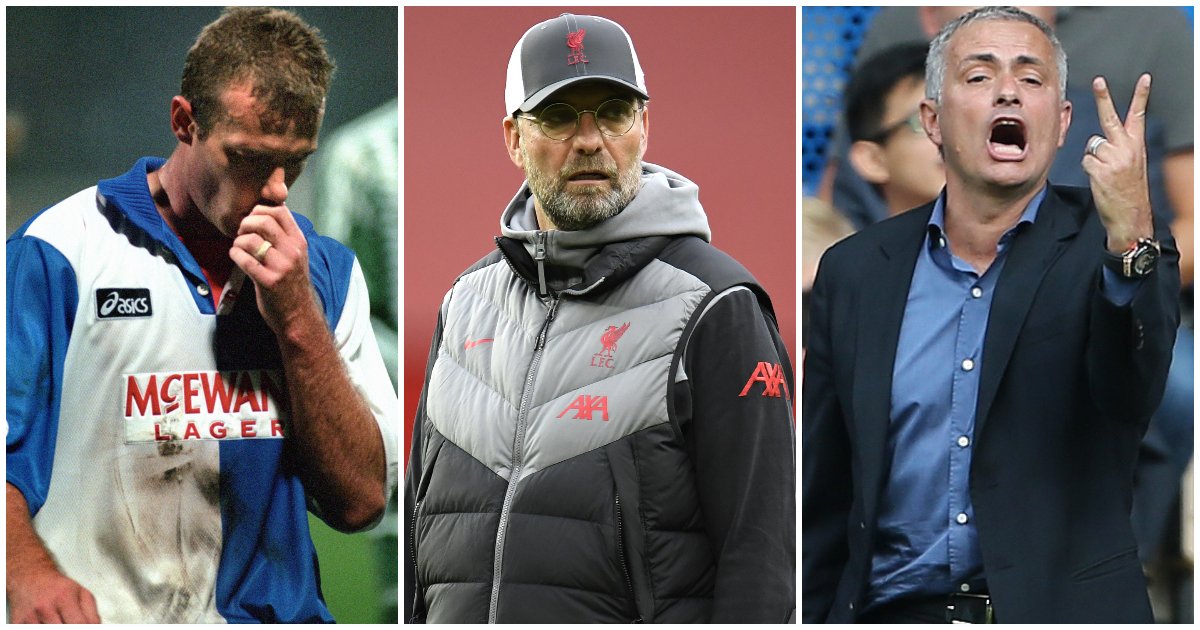 Is it fair to still call Liverpool ‘bad champions’? Here’s how their title defence compares to those of the other dethroned Premier League kings…

Roy Keane called it early when he declared Liverpool as ‘bad champions’ in February. Things got even worse for the Reds after that – but then they got better again.

1) Leicester 2016/17
Good champions: Claudio Ranieri’s Foxes stunned everyone by going from great escapees under Nigel Pearson in 2014/15 to 5000-1 Premier League kings the following year. In the end, it was a procession, with a 10-point margin of victory. The greatest story ever told in English football? Probably.

Bad champions: The Foxes, understandably, suffered quite the hangover from Jamie Vardy’s party and a summer basking in their stunning achievement. N’Golo Kante’s exit hardly helped. They reached the Champions League quarter-finals, but by that time, Ranieri had paid for a miserable title defence with his job. The Italian was axed after 25 games with his champions one point above the drop zone. Craig Shakespeare inspired some improvement and Leicester won seven of their last 13 to finish in 12th place.

Manager’s fate: Sacked after five wins in 25 matches as champions. “The board reluctantly feels that a change of leadership, while admittedly painful, is necessary in the club’s greatest interest,” read Leicester’s statement after axing Ranieri. It appeared somewhat ungrateful but few would argue that it wasn’t necessary to avoid the Foxes going from champions to the Championship.

2) Chelsea 2015/16
Good champions: Jose Mourinho disproved the theory that you should never go back by winning a third Premier League title in the second season of his second reign at Stamford Bridge. New arrivals Diego Costa and Cesc Fabregas immediately flourished, with Eden Hazard providing the inspiration in a season which saw him crowned PFA Player of the Year.

Bad champions: The tone for a pathetic title defence was set on the opening weekend, when Mourinho took aim at Chelsea’s medical staff for doing their jobs. The fall-out hung over Stamford Bridge long after Mourinho was fired in mid-December after the Blues lost nine of their 16 league matches to leave them languishing a point above the relegation zone. Guus Hiddink, as he tends to, steadied the ship and a top-half finish following the club’s worst start to a season in 37 years became a creditable achievement for Roman Abramovich’s favourite firefighter.

Excuses? Mourinho Third-Season Syndrome. There is no known cure.

Manager’s fate: Mourinho was axed 227 days after lifting another title for Chelsea and two months after receiving the public backing of the Blues. After his final game in charge, a 2-1 defeat at Leicester, the manager floated the idea that the previous season had been the blip, and his work on the training ground had been ‘betrayed’ by his players.

3) Leeds 1992/93
Good champions: Howard Wilkinson’s Whites, inspired by the February arrival of Eric Cantona, broke Manchester United’s hearts down the final stretch of the last Division One season by unseating the Red Devils, who had led from the front through most of the season. Some Leeds fans will argue that their four-point triumph was a bigger miracle than Leicester’s, with Wilko taking United from 10th in Division Two to English champions within three years.

Bad champions: Leeds’ slide as champions was certainly more dramatic than Leicester’s. During the Premier League’s inaugural season, Wilko’s champs failed to win a game away from Elland Road. They finished 17th in a 22-team division, only two points above relegated Crystal Palace. The European Cup offered little respite. They survived the first round after Stuttgart fielded one foreign player too many, only to be beaten home and away by Rangers in the next round.

Excuses? Leeds shot themselves in the foot by selling Cantona to Man Utd, where he proved the catalyst once more for a title triumph. Wilkinson maintained that it was the right call and, at the time, many loyal to the Leeds manager agreed. “I don’t think Cantona has really produced for Leeds,” said John Giles, while Norman Hunter proclaimed it “sound business”. Leeds had been languishing in the relegation zone in the weeks before sending Cantona across the Pennines, but without the inspiration of the Frenchman, Wilko reverted to a dour brand of safety-first football which only just earned them safety from the drop. Injuries weren’t a great concern. Of the first XI from the title winning season, only Mel Sterland failed to make 30 league appearances.

Manager’s fate: Leeds remained loyal to Sergeant Wilko and the following two seasons brought consecutive fifth-placed finishes, but they slumped to 13th in 1995/96, when a League Cup final appearance ended with a humping at the hands of Aston Villa. After a 4-0 defeat to a Cantona-inspired Man Utd at the start of the following season, Wilkinson was sacked.

Bad champions: Mentality monsters to mentality midgets. The Reds were breaking all the wrong records, with the 1-0 loss to Fulham being their sixth consecutive home defeat – their worst run ever. But Klopp’s beleaguered side rediscovered some grit, if not necessarily their best form, to win eight of their last 10 matches and sneak a Champions League place while all around them floundered.

Excuses? F***ing loads of them. From the reasonable, such as a decimated defence, to the utterly ridiculous.

Manager’s fate: Still snug as a grinning bug in a red rug.

5) Blackburn 1995/96
Good champions: Kenny Dalglish dragged Rovers over the finish line in 1995, finishing one point ahead of Man Utd, despite losing three of their last five matches. It was a success built by Dalglish, funded by Jack Walker’s millions, with Alan Shearer and Chris Sutton’s goals doing most of the heavy lifting. Rovers led from the front, relinquishing top spot for only a couple of games from the start of November, even if they did their best to hand the title to United during the run-in.

Bad champions: Rovers, reeling from the resignation of Dalglish as manager, finished seventh while winning just one of their Champions League fixtures in a European campaign that is best remembered for David Batty and Graeme Le Saux coming to blows in Moscow. They lost the Charity Shield to Everton in a game we just had to look up, it having being completely erased from memory, and they were bundled out of the FA Cup in the third round.

Excuses? The immediate post-title management reshuffle failed to pay off, with Dalglish’s presence unclear, especially amid a dreadful start to their title defence. Injuries did Ray Harford no favours either, with Chris Sutton, Jason Wilcox and Le Saux all missing for chunks of the campaign.

Manager’s fate: Dalglish had already scurried upstairs before the first ball was kicked in Rovers’ title defence. He lasted a year as director of football, as chairman Robert Coar explained: “He had a changing role last year which was of his choosing, and the situation has just run its course. His title was a ‘let’s see what happens’ thing. It wasn’t to work out for either side.”

6) Man Utd 2013/14
Good champions: United recovered from losing the 2011/12 title race almost with the last kick to secure their 20th championship in Sir Alex Ferguson’s final season in charge at Old Trafford. The signing of Robin van Persie was the catalyst, with the former Arsenal striker scoring 26 Premier League goals.

Bad champions: A few months after Ferguson urged United supporters to ‘back your new manager’, a plane was flying over Old Trafford proclaiming ‘Wrong One – Moyes out’. By the time Moyes was sacked in April, with four games remaining, United were already guaranteed to record their lowest points tally in the Premier League era, with home games a particular problem. Under Moyes, United were beaten six times at Old Trafford, losing in the FA Cup to Swansea, while Sunderland dumped them out of the League Cup. It led to United missing out on Champions league football for the first time since 1995.

Excuses? The absence of Ferguson is obviously a biggie. Moyes will also point to Ed Woodward’s failure to bring him Gareth Bale, Toni Kroos and Cesc Fabregas, with the United suit, in his first season in big boy pants, managing only to overpay for Marouane Fellaini in the final hours of the summer window. And then Moyes railed against the fixture schedule after the champions were made to play Chelsea, Liverpool and Man City in their first five matches: “I find it hard to believe that’s the way the balls came out of the bag, that’s for sure.”

Manager’s fate: The Chosen One was sacked in April 2014, less than a season into his six-year contract.

7) Chelsea 2017/18
Good champions: Antonio Conte took the Premier League by storm, marching to the title in his maiden season in charge while making a back-three fashionable again. The Blues earned 93 points, a total bettered only by five teams in the Premier League era

Bad champions: The novelty of the back-three was gone, with Chelsea’s opponents having sussed them out, all the while Conte’s players themselves seemed bored by it all as his squad suffered from the desperately short attention span that is customary at Stamford Bridge. Conte spent much of the season in a funk after not getting his way in the transfer market. At least the FA Cup sprinkled some glitter on a turd of a season.

Excuses? Conte will point to their recruitment and he would make a fair point, even if he didn’t need to spend a year sulking about it. The Blues got rid of Diego Costa and Nemanja Matic – it was his choice to exile Costa – and rather than signing Romelu Lukaku and Alex Oxlade-Chamberlain, they ended up with Alvaro Morata, Tiemoue Bakayoko, Davide Zappacosta and, most hilariously of all, Danny Drinkwater.