Hegemony on the home front is no longer quite enough. Barcelona need to respond to Real in Europe. 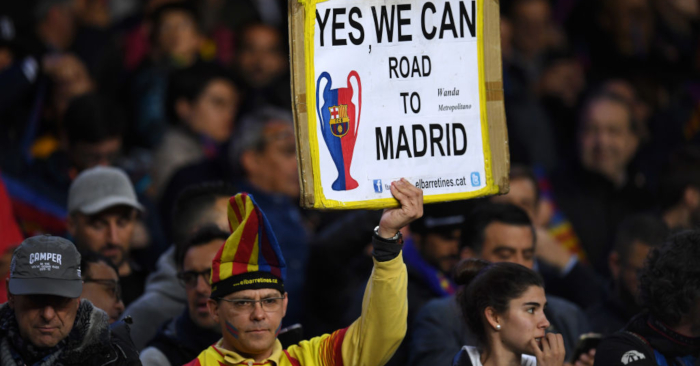 Barcelona’s 2-0 victory over Alavés on Tuesday night has taken them to within a hair’s breadth of the La Liga title. The successful defence of their crown could be confirmed on Wednesday night if second-placed Atlético Madrid lose to Valencia. Failing that, a seemingly straightforward win over struggling Levante at Camp Nou on Saturday will seal the deal.

Remarkably, it will be Barça’s eighth title in the last 11 seasons, continuing a period of domestic supremacy that started under Pep Guardiola. Before that run began, they had won 18 titles in their history – 13 fewer than Real Madrid. Barring a hugely unlikely Devon Loch-style collapse, that gap will soon be narrowed to just seven.

And if they beat Valencia in Seville next month, the Catalan side will have their sixth Copa del Rey since 2010 to go along with their sixth league title. Only Real Madrid in the 1960s have dominated a decade in a more emphatic way than Barcelona have ruled Spain in the 2010s.

But in spite of this remarkable recent record, they are often criticised by their own fans and goaded by rival fans for underachieving. It seems bizarre given how consistently excellent they have been over such a prolonged period of time, but a failure to translate their domestic prowess onto the European stage casts something of a shadow over their achievements.

The fact that their mortal enemies Real have won four of the last five Champions League trophies has brought the relative lack of success on that stage into sharper focus. If it was anyone else, it wouldn’t matter so much. But such is the intensity of the rivalry that Madrid’s Champions League brilliance has moved the battleground between the two sides away from Spain and into Europe. Hegemony on the home front is no longer quite enough.

It’s a little harsh to judge Barcelona by this metric when you consider that their success has been based on consistency over the course of several seasons, while the Champions League is, for the greater part, a knockout competition where anything can happen over 180 minutes. And it’s not as though Barcelona have been terrible in that competition in any case – they have still had their name engraved on the trophy three times over the last decade.

But the feeling is that a team of such quality should have won it more often. It is the yardstick by which any great side is judged. While league success is harder to achieve and is a more accurate measure of a team’s quality, the primacy of the Champions League in the modern era means that a side will only be deemed great if they succeed on that stage.

Last season, Barcelona won the domestic double, and only lost once all season – in the penultimate game, no less. But because they didn’t win the Champions League, and especially because Real Madrid did, that campaign is regarded as something of a disappointment.

Winning the Champions League again has become something of an obsession for many culés, who are determined to seal this current Barcelona side’s status and legacy as one of the game’s greatest, and to blunt the knives of the mocking Madridistas.

The obsession has grown greater ever since they last won the Champions League in 2015 – not only because Real Madrid have won it every year since, but also because of the manner of their exits from the competition in that time. Before this season, they hadn’t made it past the quarter-finals. In 2016, they got Cholo-ed by Atlético Madrid, in 2017 they were hammered by Juventus without scoring a goal in either leg, and most painfully of all, last season they were eliminated by Roma having held a 4-1 lead after the first leg.

They have a great opportunity to win it this season having already reached the semi-finals, and it will be a huge weight off blaugrana shoulders if they manage it. There is a great deal of pressure on them to do so, and that pressure will only intensify next season if they are to fail once again. Ernesto Valverde could even find himself out of a job if he doesn’t land the top prize this season.

Barcelona have undoubtedly been by far the best team in Spain this year, and when the title is confirmed they should be rightly proud of their great achievement. But for this Barcelona, right now, the league is not enough.