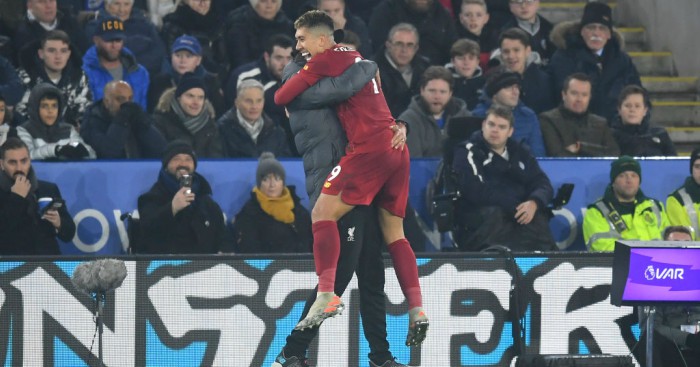 Liverpool manager Jurgen Klopp’s faith in Roberto Firmino has been repaid with a prolific run of form – and a big hug.

Klopp has confirmed that Firmino, whom he affectionately calls Bobby, recently sought him out for a heart-to-heart chat following a drought of just one goal in 16 appearances.

Klopp, however, informed Firmino that he offered far more than just goals, since when the 28-year-old Brazilian has responded with four in three matches.

Firmino scored the winners for the Reds in their Club World Cup semi-final win over Monterrey, and the final triumph against Flamengo, before a brace in the 4-0 Boxing Day rout of nearest Premier League rivals Leicester.

It resulted in an embrace between Klopp and Firmino on the touchline at the King Power Stadium.

Klopp said: “Journalists told me he hadn’t scored for a while, but the thing about Bobby is that I don’t think about scoring.

“I think about how important he is, so we had a little talk and I told him. For the first time he was a little bit concerned about that fact (he had not scored in so many games), and I told him I was not interested in that number.

“He is the connector for our team, he is so important for us. He is the only one who can play the position, and he plays the position in a very special way.

“He doesn’t have to come (for a hug) with every goal, but this time we had a little thing where, after being calm enough to leave him on the pitch in games that I never thought about (his lack of goals), he thought he would say thank you.”

The thumping of the Foxes stretched Liverpool’s lead at the top of the Premier League to 13 points, and their remarkable unbeaten run in the competition to 35 matches, going back to a 2-1 loss to Manchester City on January 3.

Klopp’s side, that next faces Wolves at Anfield on Sunday, are closing in on Arsenal’s all-time top-flight record of 49 unbeaten, set from May 2003 to October 2004.

Asked whether breaking the Gunners’ mark was a big deal, Klopp replied: “Yeah, it is massive.

“At Dortmund (during his time in charge), I think we had 28, and that felt absolutely exceptional, but only in the review.

“A colleague asked me what I feel when the boys step out on the pitch, whether I see this kind of swagger, or anything else.

“Unfortunately, I can’t see anything because I am completely concerned with all things of the game.

“I’m a very optimistic person but not before a football game. I know we can win, but I’ve never thought in my life we probably will win, so that makes life really uncomfortable sometimes.

“These numbers as well, I forget them now. The next time, if you tell me it’s 43, it will be for me a big surprise that the number is that high.”

Liverpool’s game at West Ham, which was due to take place last weekend but postponed because of their involvement in the Club World Cup, has been rescheduled for Wednesday, January 29.