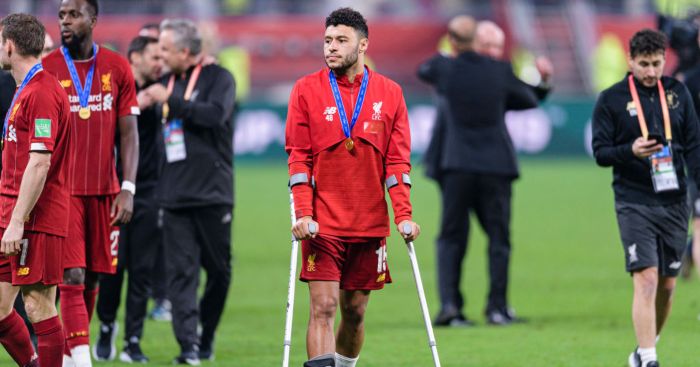 Midfielder Alex Oxlade-Chamberlain has been ruled out of Liverpool’s festive programme and could be sidelined for longer with ankle ligament damage.

The England international was forced off in Saturday’s Club World Cup final victory over Flamengo and was pictured celebrating on crutches with the rest of the squad after the final whistle.

However, he could be out for up to six weeks after Liverpool manager Jurgen Klopp confirmed it was not a minor problem.

“With Oxlade, the ankle, (as) we probably expected. You have three ligaments on the outside of the ankle, one of them is damaged and now we have to see how quick we can fix that,” he said.

“I don’t know exactly. I did the injury myself but it was years ago! It can take a while or it can be quicker, we have to see.

“But no chance for Thursday (against Leicester), no chance this year (remainder of 2019) – Oxlade will not play any more, that’s clear.

“We have to see how quick it can settle.”

Klopp said there were no other injuries from their week in Qatar, but that centre-backs Dejan Lovren (hamstring) and Joel Matip (knee) and midfielder Fabinho (ankle) would not return before 2020.

“No news on anyone else, which is good news,” he added.

“Matip, Lovren, and Fabinho (are) in a good way but not ready for these games.”