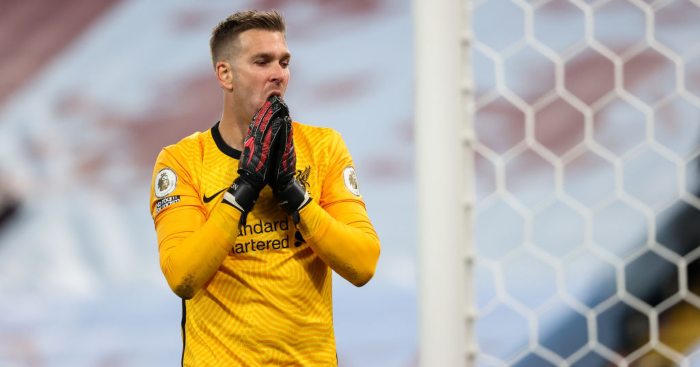 Chris Kirkland doubts Jurgen Klopp will dip into the transfer market to bring in another goalkeeper after Liverpool number one Alisson picked up an injury.

Adrian was criticised for his performance against Aston Villa on Sunday, playing a stray pass in the fourth minute to allow striker Ollie Watkins to give the underdogs the lead.

The Spanish keeper went on to concede six more goals in the match, making it Klopp’s biggest ever defeat as a manager.

Adrian is currently in the first team following an injury to number one Alisson, who could be out until late November.

Liverpool could still sign free agents or a player from the EFL but former Reds keeper Kirkland thinks Klopp will make do with what he’s got.

“I don’t think he will, no,” Kirkland told talkSPORT when asked if Klopp would bring in another goalkeeper.

“If you look at Adrian’s record when he does play, it’s pretty good. Obviously the game against Aston Villa… listen, I don’t think anyone would have predicted that at all.

“It’s one of those freak games and they’ve got to respond next game. It’s Everton, it’s a massive game. It’s a shame the fans can’t be there for it, but he’s got to perform.

“Apart from the first goal, he couldn’t really do much about the other six goals.

“The trouble is when you’ve got a goalkeeper as good as Alisson, he’s the best in the world. If he doesn’t play, whoever plays is always going to be under scrutiny because it’s impossible to live up to Alisson’s standards.

“So Adrian has that on his shoulders and any other goalkeeper would have the same as well.”