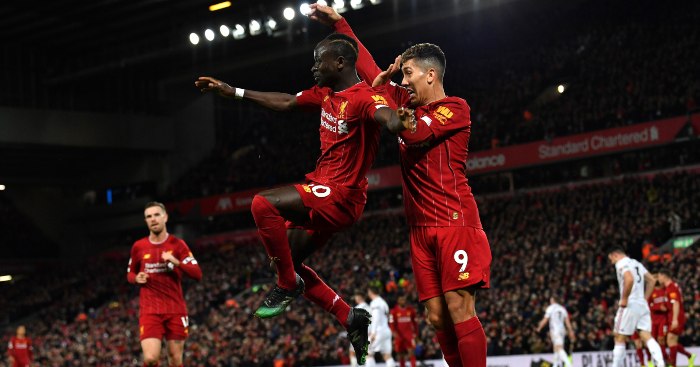 Liverpool began the new decade by completing a full year of unbeaten Premier League football. No hurdle placed in their path has tripped up the Reds since Manchester City knocked them out of their stride at this stage in last season’s title race. This term, one by one, the booby traps have been skipped over more than swerved and Jurgen Klopp’s men look all set to continue a merry stroll to their first title in 30 years.

The manner of Liverpool’s destruction of their closest challengers Leicester City last week prompted many – including us – to call the race early in the Reds’ favour. Klopp nor anyone to have witnessed three barren decades of league football at Anfield would consider counting their chickens but two games on from putting Brendan Rodgers’ boys to bed and tucking them in, even the few sceptics among Klopp’s believers would acknowledge that the victory over Sheffield United represents another big step towards glory.

It was home win at a canter over Chris Wilder’s men, who pushed Liverpool as far as anyone when they met at Bramall Lane in September. Then it was a calamitous mistake from Dean Henderson which gift-wrapped the points for Liverpool, but the runaway leaders were spared similar nervous anticipation tonight by George Baldock’s stumble in the fourth minute. After Mo Salah gave them their lead, it never appeared in danger of slipping.

Even before Sadio Mane’s second, Liverpool kept United on a lead far more successfully than the owner of the pup who cocked its leg at the Blades in Stanley Park this morning. United chased with all the enthusiasm you would expect from Wilder’s dogs of war but rarely were they given a sniff of the ball as Liverpool completed more passes around them than they ever have before in the Premier League era.

874 – Liverpool completed 874 passes against Sheffield United this evening; their most in a Premier League game since Opta have this data recorded (since the 2003-04 season), with only Manchester City managing more in a game in this period (three times). Untouchable. pic.twitter.com/EnaMAJTuMF

It was an appropriately authoritative manner in which to conclude a schedule which had Klopp worried a month ago. A run of nine first-team games in 29 days was presumed to be the time when the chasing pack might rein in the weary Reds, but instead Klopp’s men have rampaged their way to a 13-point lead at the summit while becoming World Club Cup winners and easing in to the Champions league last 16 by scoring 20 goals and conceding just three.

Remember when some jittery defending at the start of the season was pinpointed as their potential downfall this term? The Reds’ clean sheet tonight was a fifth consecutive shut-out in the Premier League and their seventh in eight games in all competitions.

If Rodgers and Pep Guardiola had hoped Liverpool would be running on fumes by now, how disheartening must it be for the fading challengers to see the Reds instead put their foot on the gas while they disappear over the horizon? Inevitably there have been a couple of breakdowns – Naby Keita failed to complete the warm-up this evening – but the squad depth which previously kidded on Klopp’s competitors has been more than sufficient to see them through this ‘criminally’ testing period.

Where can it go wrong now? Klopp’s teams traditionally suffer a post-Christmas hangover which has been known to last through January and February in years gone by. Last term they dropped nine points in that period, more than half the total number they passed up all season. But since March 3, these relentless, ridiculous Reds have dropped only two points from 87 on offer. With nine days until their next Premier League outing – albeit with a Merseyside derby in the FA Cup in between when Klopp will finally rotate – can anyone really make a case for this team slipping significantly off the unprecedented pace they have been setting?

Because the focus for everyone outside Anfield is not whether or not they will end their title drought; it is now just about how many records they can set along the way. After notching up an unbeaten year tonight, they can set a new benchmark next week for the best top-flight start in history.

Their pursuit of Invincibility may be tested at Spurs, or against Manchester United or Wolves in the two games which follow that trip to north London. Wolves would be the least surprising team of that fifth-to-seventh-placed trio to trip Liverpool up but remaining unbeaten beyond Molineux would take their run to 40 games, when Arsenal’s 49-game benchmark comes into view. The route to 46 appears serene before things get inevitably more uncomfortable at Goodison Park. The record-equalling 49th opponent? Manchester City at the Etihad. Should they match Arsene Wenger’s 2003-04 Arsenal side by staying unbeaten in a title season, it would be 55 games since Liverpool had tasted defeat.

Few would be daft enough to voice such a prospect in Klopp’s presence without fear of a sneery reprimand from the Liverpool manager. But his team has changed the conversation. The title is theirs and a place in history as one of English football’s finest seems likely to follow.