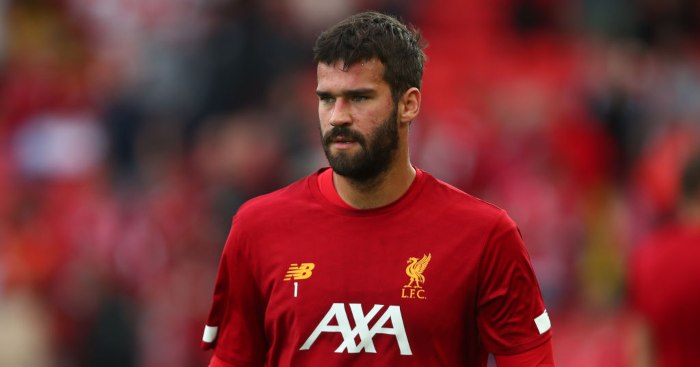 It is “difficult to say” how long Liverpool goalkeeper Alisson will be out for, according to goalkeeper coach John Achterberg.

Jurgen Klopp said ten days ago that Alisson would be out for “the next few weeks” after revealing the “not too cool” news about the Brazilian’s calf injury.

The 26-year-old damaged the calf during the first half of Liverpool‘s 4-1 Premier League victory over Norwich.

And Achterberg, who has been working closely with Alisson, has issued an update on his progress ahead of the Reds’ crucial fixture against Arsenal on Saturday.

“They haven’t given us a specific time he’ll be out, as it’s difficult to say how quickly it will heal,”Achterberg told The Athletic. “That’s all with the medics.

“There’s an international break coming up and we’ll have to wait and see how long it takes after that.

“Ali is good. He’s in every day for treatment and they try to improve things.