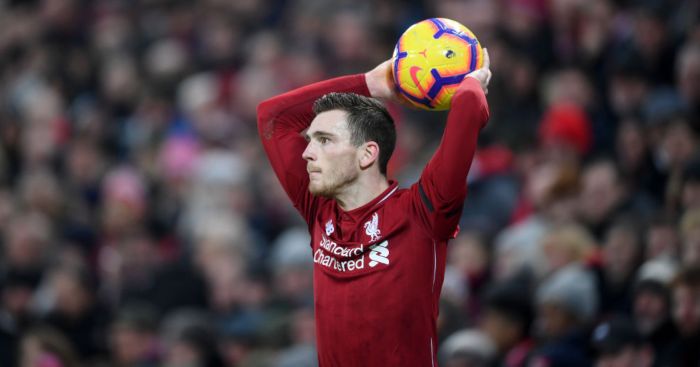 Gray drew the ire of Liverpool fans when he ridiculed the club’s decision to employ a throw-ins coach.

“I know how you can take advantage of a situation, throw it to one of your own players,” he told beIN SPORTS.

“That would be No 1. No 2, Keep hold of the ball. Maybe we are going to see Andy Robertson do a headstand and take it.

“Here is a lesson. Pick the ball up, take it behind your head, throw it to a teammate and keep both feet on the ground.

“I have got a new one. I want to be the first kick-off coach.”

Gronnemark, who started working with the club soon after they lost the 2018 Champions League final, and has been credited as part of the reason they went one step further in May, described Gray’s words as “unprofessional”.

“It didn’t bother me, I actually felt a little bit sorry for Andy Gray,” Gronnemark told The Athletic.

“If a guy looks at something new and doesn’t understand it, you have two choices. Either laugh at it or try to find out more about it.

“I just wish he’d been a bit more curious and asked why would a world-class coach like Jurgen Klopp invite him? It would have made a good feature on their show.

“Instead it was a bit like they were talking in the pub after drinking 10 pints. I think it was unprofessional. Some people hoped I’d be angry but I wasn’t. The internet answered for me with the reaction he got.

“I can laugh at the fact I’m a throw-ins coach. It’s a funny job, I know that.

“Sometimes I’ll stop and look at the players in front of me and think: ‘Oh, this is crazy.’ I’m working at a gigantic club who won the Champions League.

“Initially, I had a contract for the first half of last season then it was extended for the second half and now I have one for the full season.

“I don’t think many people are laughing now. I think most people in football look at it and say: ‘Okay, there must be something in it.'”