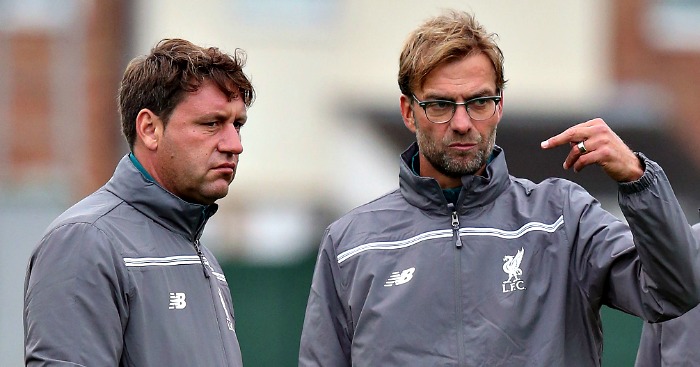 Klopp was appointed Liverpool manager in early October to replace the sacked Brendan Rodgers, and has now overseen 21 games as boss.

Soon after his appointment, the German ensured that he would be reunited with Krawietz, along with Zeljko Buvac, who had both worked under him at Borussia Dortmund.

Krawietz was appointed second assistant coach to Buvac upon his arrival, and the German is in charge of match and player analysis at Anfield.

Klopp, Krawietz and Buvac first found success as a coaching trio at FSV Mainz in the Bundesliga however, and it is there where Krawietz says Klopp met the most influential character in his managerial career.

In an exclusive interview with the Daily Telegraph, Krawietz says Klopp learnt the most from former Mainz coach Wolfgang Frank.

“Wolfgang Frank had an idea of football which was something like a revolution in Germany based on the Arrigo Sacchi style of pressing and defending,” Krawietz said. “It was new in Germany to play in a back four and play this way. Mainz was the first to do it and the success was unbelievable. Frank was a very important person for all of us when he came to Mainz.

“Mainz was always in the second Bundelsiga and near the bottom. Every year a new manager would come in, we would be at the bottom, and then the manager would be out. Wolfgang Frank came in and changed the thinking of the club. Many of the players he worked with are managers today. He was the first to take us into the top league.”

Krawietz then discussed the story of how he and Klopp met: “I began as a student in the University of Mainz and he worked with my professor. I became part of the scouting team. That’s how I met Jurgen.

“When I started my work there was a situation where I presented my analysis, telling him what he should have done.

“‘What? Me?’ he said to me. It was very funny. It was my task to tell him what he’d done wrong. Then we had a ‘discussion’ – if I can put it like that – as he asked me why I suggested this. It was the first time we spoke about football I can remember. It was the start.

“I always saw the possibility of him becoming a manager. He was an important player for his team but not the best player, but he had the attitude, leadership skills and understanding of his game to know what he could and could not do. He was always thinking for the team. He was very interested in the tactics and it was clear he was an outstanding person.”