Liverpool had a think about signing Sheffield United target Franck Ribery. It went no further. 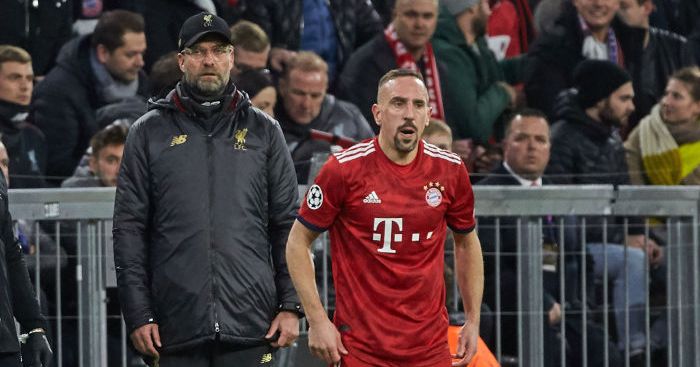 Liverpool considered signing Franck Ribery this summer before deciding against offering the free agent a contract.

Ribery was released by Bayern Munich at the end of last season, bringing a trophy-laden 12-year stay to an end.

The 36-year-old, who won the Champions League with Bayern in 2013 and should probably have claimed the Ballon d’Or that year, was unfathomably linked with Sheffield United last month.

But the Blades are not the only Premier League side to harbour an interest, with Liverpool contemplating a move earlier this summer.

French newspaper L’Equipe say Jurgen Klopp is a huge fan of the winger, who would have fit the bill of an experienced, cheap, left-sided squad option.

However, the manager did not pursue a deal due to Liverpool’s lack of outgoing players.

Klopp is eager to focus on the squad he has built at Anfield, with Ribery only an option if the likes of Harry Wilson or Xherdan Shaqiri were offloaded.

Plus Liverpool are only signing teenagers. Harvey Elliott is literally 20 years younger.