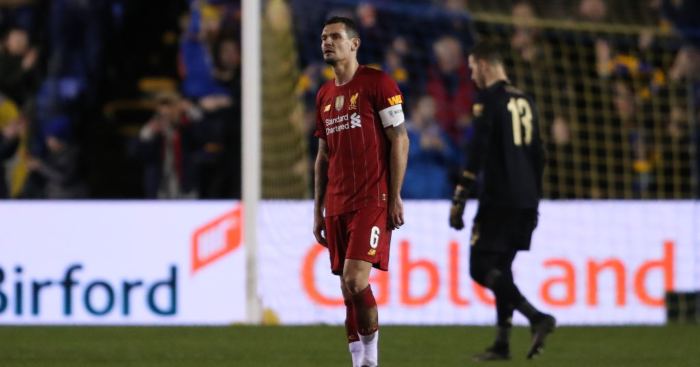 Liverpool defender Dejan Lovren wants to leave Anfield in the next transfer window over a lack of playing time, according to reports.

According to Don Balon the Croatia defender will be allowed to leave Liverpool after just nine Premier League starts have left him frustrated.

Lovren, who moved to Liverpool from Southampton in 2014, was an important figure under former boss Brendan Rodgers and in the first few years of Jurgen Klopp‘s reign.

MEDIAWATCH: Who is trying to deny Liverpool the title THIS week?

However, Virgil van Dijk’s unmissable presence at the back and the form of interchangeable pair Joe Gomez and Joel Matip have seen the Croatia international pushed down the pecking order.

Indeed, the defender was criticised for his performance in Liverpool’s first Premier League defeat of the season at Watford last month and was then dropped from the squad for the subsequent win over Bournemouth.

The Reds will attempt to cash in on the 30-year-old before his current contract expires in 2021, and per the source, Arsenal and Tottenham are thought to be interested in his services.

Apparently Lovren’s preference is to remain in England so the two London clubs may find themselves well placed, but Lazio are also keen on the defender as they seek a replacement for Luiz Felipe.

The article’s rather blunt headline, as per Google translate, says: “He can’t stand Klopp and he wants to leave!”

However, there are no details of his relationship with the German coach, who persuaded him to stay with the club last summer.

“I’m patient. I’m working behind closed doors a lot and sometimes it is frustrating when you don’t play,” he told Sky Sports News.

“You are fighting with yourself in your mind, asking ‘Why not?’. But you are accepting it, you are moving on and from my personal point of view, I want to be better every day in the training sessions.”