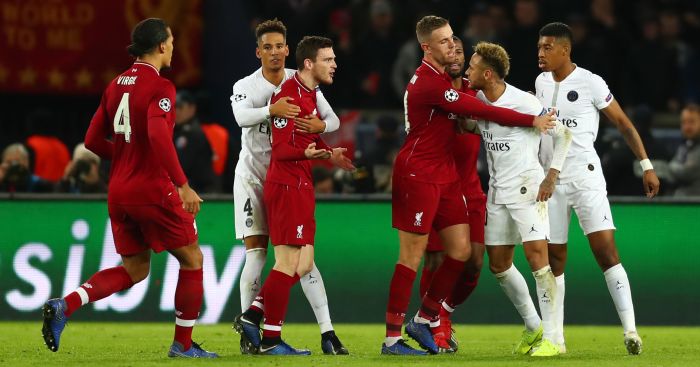 Andy Robertson admits play-acting is now “part and parcel” of football but was left frustrated by Neymar’s role in Liverpool’s 2-1 loss to Paris Saint-Germain in the Champions League.

Jurgen Klopp hit out at the PSG team’s play-acting after match, while he criticised the referee for making his side look like “butchers”.

The defeat leaves the Reds facing the prospect of exiting the Champions League at the group stage with only one more match to play.

And Robertson believes Liverpool should have dealt with the situation better after failing to control their aggression.

“I suppose they were in the lead and they were looking to waste time. You can use gamesmanship, play-acting, you can use it all really,” Robertson told Sky Sports.

“I would like to know how much time they wasted – it was frustrating. But when you play against PSG you know it’s something you’re going to come up against especially with him [Neymar]. It wasn’t something we quite dealt with tonight.

“It’s frustrating when he is falling like he is. It’s all part and parcel of his game and we needed to deal with that.

“We didn’t quite control our aggression.”