So Liverpool are either facing no title competition or will finish third... 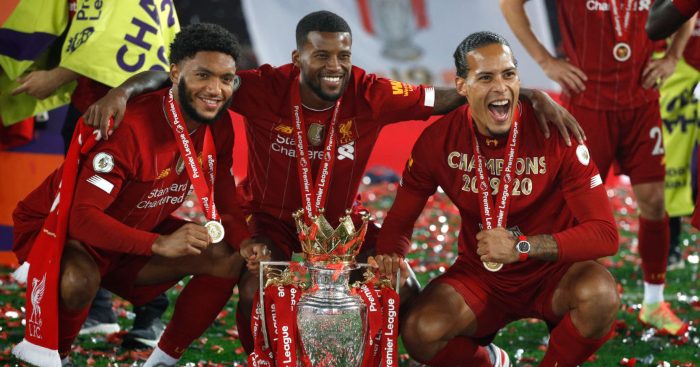 Dunn deal or no deal
Andy Dunn argues at length in the Daily Mirror that Liverpool do not need new signings to win the Premier League title again. Of course he does; he is a Liverpool man.

‘The idea you need to freshen up, that you need to improve, in terms of quality and quantity, from a position of strength, is commonly held.

‘Fix the roof while the sun is shining, and all that.

‘But what if your main rivals, distant runners-up, had not strengthened?’

It’s a good point but an entirely moot one because their rivals have strengthened; Manchester City have signed Ferran Torres and Nathan Ake.

‘When Manchester City were a country mile clear of the rest during the 2017/18 season, Klopp knew what, amongst other things, he had to do.

Indeed he did. Because in the calendar year of 2017 – before the signing of Van Dijk, Liverpool were only the sixth-best team in the Premier League, largely because they conceded 45 goals in 40 Premier League games. Their defence needed total reconstruction.

To equate the Liverpool of 2017 with the Manchester City of 2020 is simply ridiculous.

‘Even though they appear to be the bookmakers’ and many judges’ favourites, how are City going to close that gap?

‘Out of Pep Guardiola’s squad have gone the peerless David Silva and the electrifying Leroy Sane. In have come Nathan Ake and Ferran Torres.

First, Leroy Sane literally did not play last season so Ferran Torres has to be an upgrade on absolutely nothing. David Silva will be sorely missed but there’s some kid called Phil Foden – you may have heard of him – who might just step up there.

And while it’s true that Ake is no Van Dijk, City are absolutely not in the same position as Liverpool were in January 2018. They conceded just two more goals than Liverpool last season and that was largely without Aymeric Laporte; he kept 11 clean sheets in the 15 Premier League games he played. He is really quite good.

Still, this is the same Andy Dunn who was so impressed with Liverpool’s stellar recruitment in 2018 that he tipped them to finish, erm, fourth.

Red missed
At the other end of the scale, here’s Adrian Durham on talkSPORT:

“They may even struggle to finish second.

“No recruitment, Klopp moaning, terrible end to the season, and they will be deflated for not hitting 100 points at the end of last season and how that post-lockdown form went.

“Bielsa said that Anfield is not the same without the fans, and having been to Anfield last season when it was full of fans, and again when there were no fans in there, I can tell you there is a massive difference – more so than at any other Premier League ground I experienced after lockdown.

“When I say Liverpool might struggle to finish second, I even think Liverpool could well finish below Manchester United this season.”

Why stop there, Adrian? You will get even more Twitter video views if you tip them for relegation. Yes, what a ‘terrible’ end to the season in which they forged a 33-point lead over Manchester United. How will the ‘deflated’ Liverpool ever recover?

Richard Keys predicting Fulham will come 22nd in a 20 team league is very disrespectful. And hilarious. The plank. pic.twitter.com/1F7TSuKtfn

Man Solo
Back page of The Sun: ‘MASON GREENWOOD has been told to train alone on his own at Manchester United for the next few days.’

Sounds like a harsh punishment for a transgression on England duty.

Wait a minute, is it because he has had a coronavirus test and thus should not mix with his teammates?

Yes. Yes. Exactly that. So Mason Greenwood is just like any other at-risk employee at any other company in the UK this week.

At that length, it can only be the MailOnline.

And the LIVE Thiago Alcantara latest on Friday is that The Athletic reported that he ‘prefers’ Liverpool. On Wednesday.

Bid talks
Now the real Thiago latest LIVE news is to be found on the Liverpool Echo, who are more than happy to let their readers think that there has been a new bid from the club…

…when actually, the news is that BILD football man Christian Falk has been talking to Empire of the Kop and said:

“I think Thiago overestimated his market value in the times of Corona. Bayern demand €30m. So far, no club is ready to pay that amount. But on the specific question: yes, I think he will go to Liverpool. FC Barcelona and Manchester United have not yet made a concrete offer to Bayern either.”

URL crazy
We have to give reluctant praise to the Mirror website for this doozy of a slug:

It’s one hell of a way to announce a man’s promotion.

Is it though?
‘Jadon Sancho reveals he is late for Borussia Dortmund training due to a ‘sleeping problem’ – but is it because of late-night Call of Duty sessions with Man United stars Marcus Rashford, Paul Pogba and Jesse Lingard?’ – MailOnline.

As absolutely nobody has ever said they play Call of Duty late at night – this story was based purely on Jesse Lingard saying they play ‘regularly’ – then probably not. But well done for making him look like a bit of a dick.

Oh and so very odd that neither Brandon Williams nor Daniel James – also mentioned by Lingard as fans of Call of Duty – made this particular headline.

Recommended reading of the day
Barney Ronay on the new season

Miguel Delaney on the new season