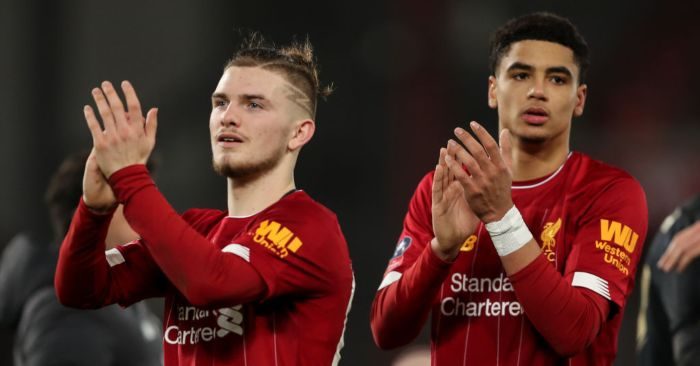 Send your thoughts, Liverpool or otherwise, to theeditor@football365.com

The magic of the cup…
…is apparently kicking the sh*t out of a team of teenagers that you can’t get near.
Adam

D.I.S.R.E.S.P.E.C.T
I for one am outraged by Liverpool fielding the youth team for last night’s game. Imagine putting out a side that dominated throughout and won the match! Absolute disgrace.
Eamonn (Clutching at my pearls and thinking of the children), Ireland.

Long live the magic of the cup!
Greg, Taunton.

F U, FA
Quick note to say unlucky and a massive F U to the FA. They accused Liverpool of disrespecting the cup, they refused to be pragmatic with their scheduling, they stirred up all the little Eng-lund-ers, and they showed their class by banning all TV coverage from the game and thus causing the Shrews to miss out on anywhere up to £500000 in revenue. Well Liverpool disrespected the cup by playing the youngsters, Liverpool won the game and everyone managed to get a stream. Up the unbearable REDS!
Pali (Eng-LUND-ers hahaha) Jhaj, Cracknell

Stay humble
Getting their stupid knickers in a twist about an event in the future, assuming that the result is predetermined, only to have their illusions shattered by a team full of kids and now having literally nothing left to hang on to. The only thing I’ve enjoyed more than our parade, our procession, our canter, our casual saunter, our cake walk, our gentle stroll up the promenade, our nonchalant repositioning of ourselves back on top of our perches is just how much it is causing our rivals to lose their collective sh*t.

In fact, it’s making it more enjoyable. “They are disrespecting the cup”, “they haven’t had injuries”, “VAR favours them”, “the premier league favours them” and blah blah blah.

Here’s the truth. Here’s what fans of the Manchester clubs and fans of other clubs around the country are struggling with: right now, Liverpool at the best club in the country. Probably Europe. Maybe the world. Certainly the trophies we have won in the last six months suggest so.

So rather than hide in the shadows, or apologise for the fact that right now, right here, our entire club is on a high I would simply say this: it’s not our problem that your club is a bag of sh*te right now. Christ knows we’ve had to rebuild. So quit your moaning and grow a pair.

And I do’nt care a toss who was better in previous seasons. All I know, is that right now, we are the best team in the country. And that will do for me.

Unbearable? Could. Not. Give. A. Sh*t. Able.
Jon Cardy

Wind your Neco in
Quietly excited to see a Fabinho and TAA midfield partnership with Neco Williams at right back in the next few years.
Sam

A question
There’s a very good chance Liverpool will win every game from now until the end of the season.

But this brings up a problem – should Liverpool achieve the feat then hated rival Man Utd will be the only team to have taken any points off them this season.

So my question to the Scousers is would you take another draw this season just so United aren’t able to make this claim? or do you say sod it, let’s just get the most amount of points we can?
Graham Simons, Gooner, Norf London

Milner love
Watching Liverpool u23s and James Milner pops up frombbehind the bench; is he up there as one of the best midfielders of the Premier league years?

Scholes, Gerrard, Lampard etc. He’ll have one of the most diverse and decorated careers whenever ever he does finish up.
Luke

Kick late kick-offs out of football
Just seeing the Liverpool match is kicking off at 2000hrs hrs. That’s a 2200hrs finish to the game. Isn’t it past their bed time!

Disgraceful that the FA would condone that type of abuse.

Wonder how they will perform deprived of sleep, I hope they got their afternoon nap.
Chris

GLOAT
Surely we need to starting talking about the aptly named GLOAT (Greatest Liverpool team Of All Time).

GK: Allison has a long way to go to match Ray Clemence, and is probably still behind Grobelaar in terms of individual brilliance

RB: TTA will need another 15 years and a stack of pots to match Phil Neale

CB: Usually Hansen plus one – VVD is moving into that spot, despite the presence of Emlyn Hughes and Tommy Smith. Ron Yeats still stands in his way.

LB: Robbo is not yet at Alan Kennedy’s level

CM: Souness is the best Liverpool midfielder of all time

RM/RW: Can we shoehorn Salah in here vs Ian Callaghan/others?

LM/LW: Mane would be a stretch with Ray Kennedy, McDermott and John Barnes to compete with…but getting closer

CF: Rush: Still a long way ahead of every other forward.

Overall, we’re obviously comparing current players to guys who have completed their career, but it looks like maybe 3-4 of the current team could make the GLOAT team (it’s almost 3 Cup minimum to become a GLOAT).
Matthew (not a Pool fan)

Liverpool, West Ham, Aaron Sorkin and Johnny Nic
There were two separate yet connected incidents that caught my attention yesterday.

1. The FA (in all it’s wisdom) “taking retribution” against Liverpool’s stance on fixture congestion, by banning all domestic and international broadcasts. (I am sure you will get other mails about this)

2. On a seemingly unrelated note, West Ham United (shout out to the loyal supporters who frequent AJ Hudson’s in Chicago every weekend) banned a supporter for the rest of the season – because he was wearing a shirt with a message protesting against messrs. Gold and Sullivan,

Just two examples, but it does not take a Chomsky to realize the increasing patterns in the attempts to quash any dissenting voice. For everyone who complains about “sportswashing” at City (this coming from a Liverpool fan) and Qatar – perhaps it’s time to take a look closer to home at our own institutions.

Borrowing from a monologue in Aaron Sorkin’s movie “American President” (i.e. Michael Douglas, not Donald) – ” you want free speech? Let’s see you acknowledge a man whose words make your blood boil, who’s standing center stage and advocating, at the top of his lungs that which you would spend a lifetime opposing at the top of yours”.

What am I trying to say? I’m tempted to conclude that the FA (not Richard Scudamore as Pep might think), the David’s, and others should watch more of Aaron Sorkin’s work – but we all know that’s not it. Maybe Johny Nic can elaborate more eloquently than I can ever attempt to 🙂 !!

YNWA from Chicago
Vinod (This one’s for Captain Kirk – and yep, I cried as I read that. RIP sir) !!

Muddy Prince
So, Prince Abdullah of the Saudi Royal family is now the sole owner of Sheffield United.  Is it too soon to accuse them of sports-washing and to call their success tainted? What is a reasonable amount of time to wait, before we can highlight the human rights abuses in Saudi Arabia and say that the club is run with dirty money?

Perhaps when Sheffield United start playing in Europe or when they start spending massive amounts of money on transfers?

Or maybe when they start challenging the traditional big clubs on a regular basis?

P.S: Before anyone goes all ‘Ad Hominem’ on me, I’m not a City fan. Just curious how people distinguish this from Shiekh Mansour’s ownership of City. On every level, Saudi Arabia trumps UAE on human rights abuses.

Mitro to Man Utd
I may not have been totally caught up with the transfers and the gossips, but did Man Utd ever consider Fulham’s Alex Mitrovic?

That being said, even Ighalo could be an upgrade on Martial already

Barry Island
Not that it matters, but there were three different Barry’s in the morning mailbox yesterday.
Barry (Perth)