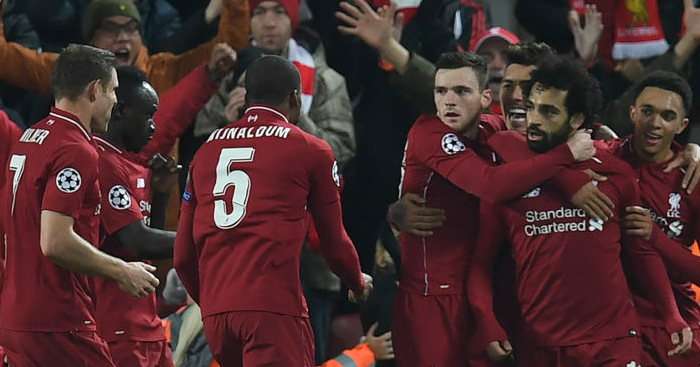 For all the talk of needing a miracle, it was oddly calm throughout much of the game at Anfield. Liverpool were in control from the off, and Napoli played like it hadn’t occurred to them that the hosts could actually go ahead – even after they did so in the 34th minute.

That goal came through the allegedly recently out-of-form Mohamed Salah, who may as well have been a spectre for all the ease with which he went past two grasping, handsy Napoli defenders, before slotting the ball through David Ospina’s legs and in at the far corner.

We were beginning to worry that it was all going to end up being a bit disappointing, almost – but then suddenly, with about 20 minutes to go, Napoli seemed finally to realise that they did, in fact, need a goal to go through, and a wonderfully nerve-shredding game of ‘next goal wins’ got underway.

Salah rounded Ospina but a little touch from the goalkeeper pushed it just too wide for the forward to do anything with it. Ospina saved from Mane off a good Andy Robertson cross. Jose Callejon shinned the ball well over Alisson’s bar under pressure from Robertson when he really should have scored from just a few yards out, and Mane wasted an equally viable chance at the other end off a Salah square ball. Napoli put the ball in the net after the flag had already gone up for offside.

But the final, most heart-stopping moment was saved until last, 90 seconds into four minutes of injury time: Callejon’s inswinging cross from deep went through the Liverpool box and landed at the feet of Arkadiusz Milik seven yards from goal. The full horror of the mathematical implications will have flashed through every Red mind present at Anfield in one terrible instant: there would not be time for Liverpool to respond with the two goals they would need to progress once Napoli had equalised.

But just as instantly, there was relief: Alisson, the big beautiful Brazilian beast in the Liverpool goal, read the move, made himself big without over-committing to closing down the ball, and deflected the ball up and away with his thigh; a save worthy of Istanbul’s Jerzy Dudek. “I have no idea how he could have made a save like this,” said a beaming Klopp after the game. Because he’s a bloody good goalkeeper, is the answer.

There was still time for another Mane miss from yet another one-on-one with Ospina – not that it would have made a jot of difference either way – before the referee blew the final whistle, sending last year’s runners-up through at the Italians’ expense.

Goalscorer Salah and match-saver Alisson deserve to take the plaudits that will come their way after pulling Liverpool’s chestnuts from the open fire, but this was a performance that showed everything that has made Liverpool so dependable and impressive in the league this season and instantly rendered their earlier group stage inadequacies a mere historical footnote.

Both full-backs – Robertson and Trent Alexander-Arnold – were superb throughout at both ends of the pitch. Virgil Van Dijk, it has to be said, could count himself lucky to have escaped with a yellow card for a shin-high tackle that won the ball but could also have easily broken Dries Mertens’ leg and thus could have been considered excessive force; but thereafter was as exemplary as we have come to expect. Wijnaldum and Milner both played some magical through-balls to release Salah or Mane, and it was only through poor finishing that Liverpool didn’t find more than their solitary goal – the only criticism that could be levelled at them on the night, but one they won’t care about one bit.

More pleasing, though, was that even when things didn’t go their way, their response was wonderful. At one point in the first half, Jordan Henderson put a rare foot wrong in another of his dependable-but-unspectacular showings by passing the ball straight to a Napoli defender, only for it to immediately turn into a Liverpool chance thanks to the highest and most pressing of high presses. It was a trend that continued throughout the game, with Alisson’s save providing the exclamation mark at the end of vital, impressive, nervy Liverpool success.

Liverpool will be rightly delighted to be in the draw for the last 16, but they will not need to think about it again until February. Manchester United come to town on Sunday, looking to knock them off their f**king perch at the top of the Premier League table and hoping to inflict a first defeat of the season that would make such effusive praise look very silly indeed. But what else can we say after a night where even the momentary lapses that might be taken for weakness were dealt with so swiftly and decisively that even they became demonstrations of strength?

They are still rolling on  an unbeaten start in which they have nevertheless occasionally looked beneath their best, Liverpool look closer than ever to showing that they are finally – finally – the actual real deal. We thought they might need yet another piece of European divine intervention; but it turns out that when you have talented, motivated, well-drilled players doing what they’re supposed to be doing, the miracles take care of themselves.