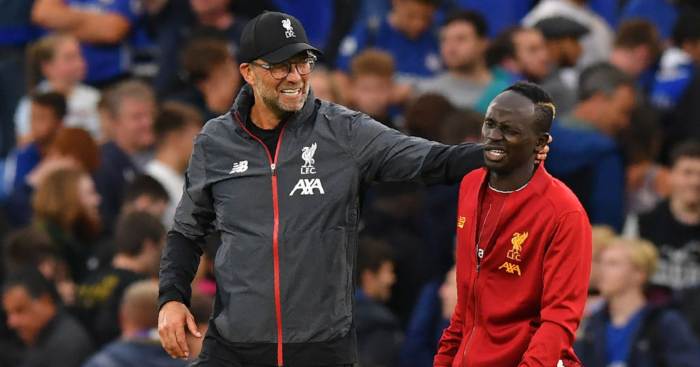 Will the season resume? Will Liverpool be given the title? How will promotion/relegation be handled? Will anyone get their money back for anything? Nobody knows. But if we don’t keep talking about football, we’ll all have to start reading Greek philosophy or something. So let’s hand out some extremely unofficial early end-of-season awards – at least we’ll have something to argue about. (Stay safe, everyone.)

Best Response To An Official’s Decision: Ashley Barnes, during Bournemouth v Burnley, who at one point quite clearly said to Martin Atkinson “but that’s bulls**t!” (He was right, too.

Player of the Season: Sadio Mané. You just knew he’d do the business when necessary. Runner-Up: Kevin DeBruyne, who should get an extra ‘F’ somewhere in his initials.

Boaty McBoatface Award: Emiliano Buendía, who had several good days for Norwich City. Runner-up: Matteo Guendouzi, whose name used to trip the Vuukle censors but now passes muster. Incidentally, ‘Matteo Fartface’ has been OK all along.

Best Match: Wolves 3-2 Manchester City. Ten-man City take a two-goal lead, then Wolves wear them down in front of a raucous crowd, levelling in the 82nd and scoring the winner in the 89th. Extra points for a night game.

Shiny Object Award: John Lundstram, lionised by the press in September after a productive start, then promptly forgotten for the rest of the season. Eventually lost his starting place to Sander Berge.

Tactics Award: Graham Potter, who at the Emirates made three switches of formation in the second half, each one making a positive impact in an eventual 2-1 victory over Arsenal.

It’s All About The Narrative Award: The British press, reporting on the above match. Not a single report mentioned Graham Potter’s formation changes; all focused on Arsenal’s continuing struggles under Freddie Ljungberg.

Most Underpublicised Player: John Egan of Sheffield United. Superb in the middle of a three all season, the same position at which Conor Coady got so much praise last year.

Santi Cazorla Award: Fabian Delph, the midfielder who made the largest percentage of passes with his weaker foot, 34.1%.

Anti-Santi: Oliver Norwood, who made only 4.1% of passes with his left foot. Scott McTominay was just behind at 4.2%.

Play It To Feet Award: Gerard Deulofeu, who lost 18 of his 19 aerial duels.

Special Citation: Bournemouth, who in their match home to Norwich City started two Cooks (Steve and Lewis) and two Wilsons (Harry and Callum).

Extra Special Citation: Commenters at F365, for putting up with Vuukle all season. GET IT SORTED WINTY.