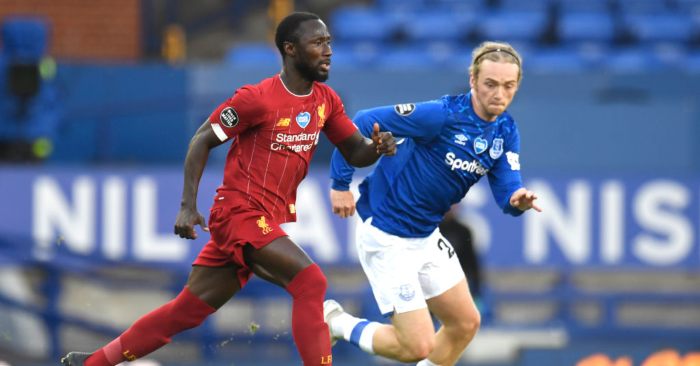 Fields of Anfield Road
In an effort to inject some drama into this Premier League season, we all have to pretend to be invested in where and when Liverpool win the title. Hands up if you actually give a shiny sh*te about this detail. If you are now raising your hand, slowly lower it and have a quiet word with yourself.

‘Mersey stalemate could end Kop hopes of clinching title at Anfield’ say The Sun, who say that Liverpool’s ‘hopes of clinching their first title in 30 years at Anfield took a hit last night’. A hit? Jurgen Klopp himself has said that “we hope we will be at Anfield but we don’t know and that’s not important”. Because it really isn’t.

But what is pretty important is that any Mersey stalemate could never end Kop hopes of clinching the title at Anfield because Liverpool have three more fixtures at home after this Wednesday against Crystal Palace. They could easily win it there, at the Etihad or at home in their living rooms if Chelsea beat Manchester City on Thursday. But they will win it and The Sun can put a black border around their back page on that day.

Meanwhile, the Daily Mirror crank up the drama by saying that ‘they may now have to win title at the Etihad’. Or at Anfield, in Brighton or in their living rooms because they are still actually 23 points ahead.

Imagination
The Sun’s David Facey was taxed with writing ‘THE BIG-MATCH VERDICT’, so obviously he wrote a tactical examination of how Everton were able to contain Liverpool using a deep and narrow back four. No? Well why would you do that when you can reminisce about a Merseyside derby in 1967, musing:

‘It’s hard to imagine what previous generations of fans from both clubs would have made of a match played behind closed doors.’

It’s really not. They probably would have thought that it sounded unusual but sensible during a global pandemic.

‘Neat and tidy first half, hit a fizzing volley, but not a display that will make him a regular’ – 5 (Daily Mail).

Guess that’s why they call them the Blues
‘Lacklustre Reds splutter to a draw against bitter rivals as Everton have the best of the derby’ is the verdict in the Mirror. Well somebody really should have told David Anderson, who not only gave Keita that 8 but decided that Everton’s centre-halves both only deserved 6/10 for basically restricting the champions-elect to pot-shots.

On message
‘Linda Pizzuti sends Liverpool message as Jurgen Klopp’s side are made to wait for title’ – Mirror.

After 106 days, @lfc returned to the pitch. We took just one point from the goalless Merseyside derby today, with 5 more points needed. Wonderful to watch them play, though definitely different without fans. pic.twitter.com/w6BOzaG8aC

And that, ladies and gentlemen is the biggest news story in football at 11am on Monday after an almost-full Premier League fixture list.

Warning! Warning!
‘Man City boss Pep Guardiola warns Liverpool about next season’s Premier League title race’ is the leading headline on the Express football page. And what is this ‘warning’? What marbles has Guardiola flung into the path of Jurgen Klopp?

“When we retained the title we were the first for 10 years so you know how difficult it is to do that.”

Now that is quite the ‘warning’. There’s nothing like a widely known football fact to put the heebie-jeebies up a whole club.

Timo after Timo
‘Liverpool analysis – Timo Werner question lingers but new Reds star could be emerging’ is the headline on the Liverpool Echo as they join the queue of people trying to eke conclusions out of a terrible game. Some managed 16.

And it seems that ‘new Reds star’ who ‘could be emerging’ is Takumi Minamino, who ‘appeared sharp from the off at Goodison, sending one sighter high and wide early on and linking up well with Trent Alexander-Arnold and Roberto Firmino’.

Somebody should tell the rest of the Echo staff; his performance was rated 6/10.

Werning sign
While we are talking about Timo Werner, let’s hear the thoughts of John Barnes, who joins a long list of former Liverpool players who claim that they never fancied him anyway.

Back in May he was bullish: “When you’re a top club, European champions and about to win the league, why would you want to go to Chelsea or Manchester United over Liverpool?”

Well, we’re not really sure that finances work like that, John, but let’s see what he has to say after a goalless draw with Everton which featured only three on-target shots from Liverpool…

You’re right, John. It’s far, far better not to sign a player who has scored 26 Bundesliga goals this season when you can bring in players like Minamoto and have Divock Origi on the bench.

“I know Jurgen doesn’t like to have a big squad and lots of superstars in the team because keeping them happy could be problematic. We’ve seen now and again, like the Barcelona game, Origi can come in and do a job, Shaqiri we still have, so I do take that point.”

We are sure you are right; Klopp would absolutely hate to have superstars in his team. It’s far better to bring on Origi for 24 minutes in which he had no shots, created no chances and touched the ball 14 times.

We knew it was bollocks but wrote it anyway.