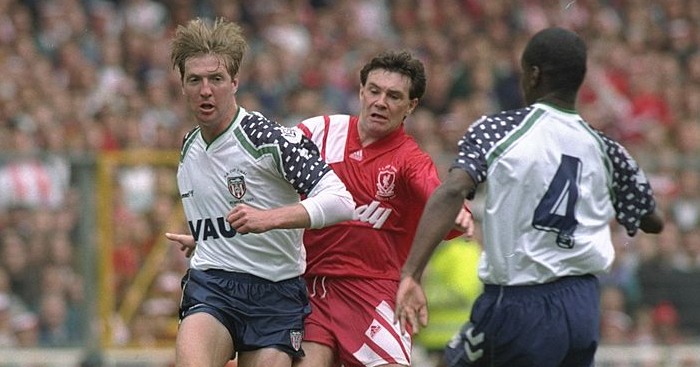 The FA Cup is widely regarded as the greatest cup competition in the world but little is known about one of its most infamous gaffes.

You have to cast your mind back to the showpiece final between Liverpool and Sunderland on a lovely May summer’s day in 1992.

The Merseysiders would triumph 2-0 over their Second Division opponents thanks to second-half goals from Micky Thomas and Ian Rush.

Anton Rogan was in the Black Cats line-up that day having recently joined from Celtic where he had played in four consecutive cup finals north of the border.

He told the Talkin Fitbaw podcast, his trip to Wembley lives long in the memory for unusual reasons:

“I took it all in my stride but a lot of our players probably had never seen anything like that before.

“I was quite lucky, I had just played in four on the bounce but the rest of the lads were thinking ‘What the hell’s going on here?’

“They beat us 2-0. If we had scored in the first half we’d have beat them.

“We had a load of chances then Micky Thomas came out and scored a wonder goal two minutes into the second half and that seen us off.

“But we were walking up to get our medals and as I’m walking down the steps I’m looking at my medal and thinking ‘Christ Almighty, I’ve won!’

“Can you believe they gave us the wrong medals?”

“I’m thinking, I’ve won another one!

Former @SunderlandAFC star Anton Rogan tells a great story from the 92’ #FACupFinal when they were given the wrong medals.🏅😂

“This is how pathetic it was, at the end of the match the Liverpool lads went up and went, ‘Oh My God, we’ve lost.’

“But they made us change medals on the pitch, believe it or not, that’s how bad it was.

“I changed my medal with Ray Houghton, a good Celtic man, but you’d think in that day and age how can they give us the wrong medals?”