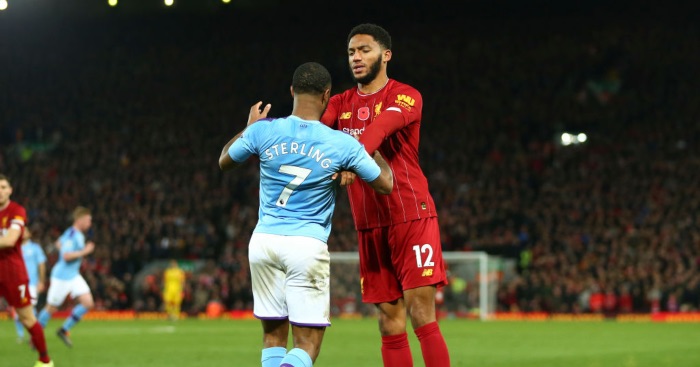 Tottenham defender Danny Rose thinks Liverpool fans had a “part to play” in the bust-up between Raheem Sterling and Joe Gomez on England duty.

Sterling and Gomez clashed at England’s training complex at St George’s Park as the team-mates met up ahead of the forthcoming international fixtures.

Things had got a little feisty between the pair during Liverpool’s 3-1 victory over Manchester City as they squared up during the Premier League match.

The Football Association announced on Monday that Sterling would not be considered for Thursday’s Wembley clash following the incident.

Gomez and Sterling have both trained together on Tuesday and Wednesday since the pair clashed in the canteen, while Gareth Southgate addressed the burning issue at his press conference on Tuesday.

And Rose thinks Liverpool fans’ ‘dislike’ towards Sterling may have played a part in tensions flaring at the England camp.

“It’s probably the first time I have sat back and actually realised and took note of how much the Liverpool fans dislike him,” Rose told BBC Radio 5 Live.

“I take that for granted whenever I’m watching Raheem. I think he just gets on with it and maybe it had a part to play in whatever happened.”

Rose added: “We have moved on. You know the media and everyone will have their fun today and tomorrow.

“But I hope it can be put to bed as soon as possible because obviously Joe is – and I’m not just saying this – one of the nicest people I have come across in football.

Sterling apologised and admitted “emotions got the better of me” in a post on social media and Rose believes it “was from the heart”.

“You could sense that and you could hear that,” continued Rose.

“Joe spoke afterwards and we were all proud of what they said. We are just happy that everyone has woken up in a better mood this morning.”