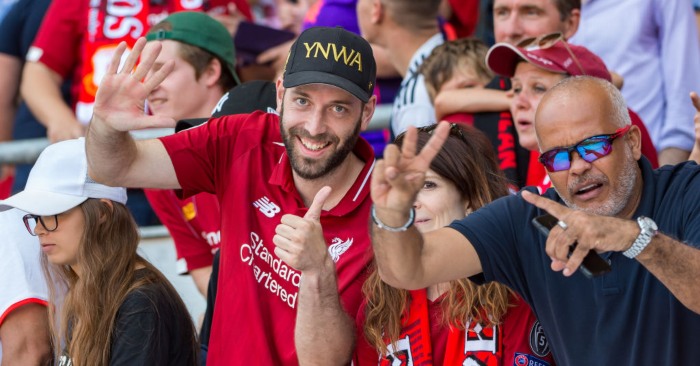 There has been much discussion about what fans of Liverpool might do when they win the league. Will they abandon social distancing, cast off their snoods or masks and disobey all the other oft-confusing, sometimes meaningless and apparently negotiable options sold to us by our masters as ways to stay safe?

Will fans gather at Anfield and party? Will they hang around an away ground in their thousands, just to breathe the same air as their heroes as they claim their first title for 30 years?

Of course they will.

They are not going to sit in their houses in their hundreds of thousands and do nothing. This is a massive thing in their life and for many it is natural to want to be around like minds at the peak moment of achievement. Whether around Anfield or just on the streets of the city, there will be much rejoicing.

Away from Liverpool, more broadly, the police are said to be concerned that Premier League football being played without crowds in the grounds will just result in crowds being outside the ground and they’re right to be concerned. And albeit to varying degrees, depending who is playing and where, it will almost certainly happen.

As I write, a crowd is tearing down the statue of a slave trader. The government’s advice about any of this is all but worthless, or at least is being widely disregarded as lacking credibility or fairness. We seem to have decided to do whatever we feel is right for us to do and ignore what these hapless, hypocritical, lying politicians say. Given the remorseless uptick of deaths, will history judge it the worst thing we could do to now largely ignore their advice?

Whatever our personal judgement, a lot of people have already weighed up the danger to themselves or their friends and family and thought, sod it, I’ll risk the park, the beach or the demo, it probably won’t be me who gets it and dies, in the same way we get into a car knowing there are fatal accidents every day but it probably won’t be us this time, even if it is always someone.

So some fans of the better-supported clubs will almost inevitably hang around their ground on match days. When you’ve got a fanbase of hundreds of thousands, you only need 1% to risk it in order to put a couple of thousand people on the streets.

And on top of all these behaviour drivers, there are also quite simply reckless people out there. All of those defending football supporters in various pieces last week are right but only to an extent – by and large, we’re not a bad bunch – but there are a lot of us in number and thus the law of averages says there is always a small minority who are idiotic trouble-making bastards. Sorry, but we all know it’s true because we’ve seen and heard them all our lives. And they are the ones in all walks of life who cause all the problems and absorb most of the resources.

You think they care about a virus? Not at all. They’re the ones who need segregating from the opposition fans because their urge to abuse and fight is so strong. That’s how much they care about themselves or anyone else. Me and hopefully you aren’t even going to be rude to anyone let alone be violent; we don’t need to be segregated. But we have to be segregated because of them.

And they’ll be at the grounds, of course they will. It’ll be a novelty, it’ll be something to do and it’ll feel transgressive. They’ll fancy a slice of that pie with a side order of tribalism, please. And what’s the government going to do about it really? Nothing. They’ve totally undermined their own authority and credibility by acts of hypocrisy and spouting outright exaggerations and untruths.

Put together all of these factors, the desire to celebrate, the boredom, the love of football, the love of clubs, the mistrust of and disgust at government, as well as the reckless ne’er do wells, and you can guarantee the streets around grounds will see action in the coming weeks.

The police will have to police it and people will be indignant about these transgressions on Twitter, but we might as well get used to it. The lockdown is falling apart, driven by a toxic mix of intellectual inadequacy, administrative incompetence and appalling political expediency. The choice whether to be around crowds of people will be ours to make and ours alone. The state’s hands are off the wheel, if indeed they were ever really on.

And becoming familiar with gatherings outside of grounds for the next couple of months will make it all the more easy for us all to accept crowds inside grounds a month or two later, especially as reports of negative tests come back from the Premier League and infection rates drop. That’s what is coming. Maybe with reduced capacity, maybe issued with a mask with a club logo on, but there are already plenty of people who will risk it – we’ve seen that already – and by September, there’ll be plenty more. Only history will reflect whether this will be a good thing or a truly terrible thing.

By the time the leaves are turning to gold, will there be any point in resisting the new season being played out in front of paying punters? It’s what clubs want and many need in order to survive, and the coming weeks are the first steps towards that. Many will think it mad and will stay away, of course, but many – perhaps those who are at statistically the least risk – absolutely won’t.

Whether we think it’s right, or wrong, we can make our own risk assessments, but when football is being played it will generally attract people like flies to jam, because the lockdown has broken down and after briefly being all in this together, once again, it is everyone for themselves.

Good luck. Look after yourself.