Home Mailbox Liverpool fans shrug: ‘This was the right game to lose’ 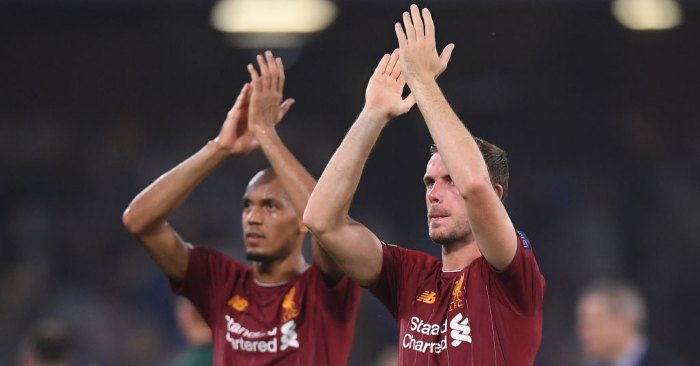 You know what to do – mail us at theeditor@football365.com

1) If anything deserves to be talked about first it’s the two solid defences. Both defences were up against good attacks but, bar a few wobbles, put in masterclasses. Koulibaly in particular was smothering everything.

2) Someone call the VARbrigade, there’s going to be a fire in the mailbox. The way they’ve set up VAR is actually creating worse decisions. Referees are making decisions or leaving decisions in anticipation that VAR will rule out errors, but the threshold of clear and obvious is simply reinforcing bad marginal decisions. They’ve made a real hash of utilising video technology. They’ve gone in with the first principle being to cause as little disruption as possible. But if you’re going to use technology to help decisions then the primary goal must be to get the best decisions. Otherwise, it’s primary purpose is undermined. Anyway, we’ve been through this all before. It’ll be like this until they fix it or the game adapts / changes in some way.

3) Liverpool didn’t look tired but sluggish. They seem to play this way in the group games these days. Particularly away from home. I’m not sure if it is to conserve energy and keep it tight but it has been rather unsuccessful. It wasn’t a bad performance but it was always risking a tight match that could go wrong. It went wrong.

4) Fabinho is in some form. Playing some brilliant football and is by far Liverpool’s standout midfielder now.

5) Despite conceding two goals, Adrian had a great match. Pleasing to see ahead of the weekend, when I think the match will be a bit chaotic.

6) Even with how the game went, I don’t think 1-0 was too bad a result for Liverpool. But 2-0 is frustrating as it now puts Napoli in the driving seat to qualify top of an otherwise easy enough group. Not the end of the world but a 2-0 defeat is never ideal in the opening game.
Sam(inho)

And three more…
All I have to say about the Napoli game is:

We performed better than last year.

You’d never have guessed it was Adrian’s CL debut, he made some great saves in to keep us in the game at 0-0. Fabinho was excellent as well.

The penalty was harsh but complaining won’t change anything now (but there’ll be plenty of complaints in the mailbox, I’m sure).
Lucy, LFC

This was the right game to lose…
That’s okay. That’s a good thing.

I’d rather get a wakeup call in a group that is teed up to qualify for, than lose to Wolves or Bournemouth away.

Liverpool played well. The Twatterati can enjoy the moment of losing a game, but, honestly, Liverpool will qualify from this group. And even if it is second place, after one game, I really think they would rather get hold of the big guns anyway.

Liverpool probably won’t win the Champions League this year. But they will be in the knockout phase. And then it is anyone’s.

And if you want to bet against a team who reached the last two finals of the European Elite, suddenly dropping off because of a first defeat, Well, you’d be a massive penis.

Enjoy the defeat. Yes. Liverpool can lose. Notice I’ve mentioned nothing about the goals. It is what it is.

All I see is a wake-up call. This is just going to piss them off.
Johnny Dennison

…It’s been a cracking phase as a Liverpool supporter, they have started this season from where they left off last year. Incredible run. I always used to wonder how it would feel for us to lose (not counting that community shield training) a game or even draw one. Though it feels bad, it was a game that could have gone either way. The performance was really good and of course, the finishing could have been better. If Liverpool were allowed few games to lose for this season they have probably lost one of the most convenient games with a favorable group to progress. I just hope to turn this result soon against a leaky Chelsea defense this weekend.
Arsh Khurana, LFC, Delhi

The main success seems to be deflecting the blame and pressure of big decisions from the very real and present referee to a nameless, faceless hivemind that the players and fans can’t yell and scream at.

Which if it were the point, would be commendable. But if the point is to help referees, players, fans, teams, managers, or anyone who actually enjoys the sport of football, do their jobs correctly – then it is failing. Unlike goal-line technology, it is an entirely subjective process and so it can rarely assist in proving or disapproving anything.

Taking the Robertson penalty incident. Let’s call it soft. But that isn’t what bothers me about it. What bothers me is that VAR doesn’t even care whether it was a penalty or not. The system only cares if ‘a clear and obvious error was made.’ And because it really really really looked like a penalty, it doesn’t actually matter if it was. As long as the ref isn’t adjudged to have made a big ol’ nasty mistake to embarrass themselves, we can ignore the remaining video evidence.

So I ask again, what’s the point? Who is VAR for? And what ‘problems’ is it actually designed to solve?

Anyway, to end this mail on a more hilarious note. I enjoyed the commentators remarking that Llorente has exacted revenge for the Champions League final defeat. Yes. The sweet vengeance of scoring the second goal in a 2-0 win of the opening group game will help him banish the memories of losing a cup final. A dish served cold indeed.
Ryan C, LFC

…Seriously? I don’t know what the point of VAR is? If you can’t see on the replay that a clear and obvious dive has happened then there must be some kind of interpretation of the VAR system that UEFA hasn’t told us about? The player is literally in the air before he gets near Robertsons leg? It’s a clear dive? Head scratching stuff.
Derek, The Unbearables, Dublin

…Struggling to understand the point of VAR if it doesn’t want to overturn a decision like the penalty tonight. He is going down before any body contact occurs which should tell the video ref everything he needs to know. Truly astounded and left wondering what the point of having a video ref is anymore. Arguably it just wastes time within the game now without removing poor decisions or aiding the officials. If the ref saw that replay he would never give that penalty twice.

Overall felt we played fine. We were better than last season at the same stadium. Also think losing a game here helps from a complacency perspective. Chelsea on the weekend is the game that matters this week.

A midfield of Milner, Henderson and Fabinho isn’t our most dynamic trio but we still did ok for the most part. Tonight was weird because the front three were all trying too hard to pass to each other. I almost wondered if they’d been drilled beforehand to sacrifice for the good of the team because everyone knew this was a horrible away game but it resulted in them making poor decisions.
Minty, LFC

Oh Chelsea…
The VAR review took at least 2 minutes before a decision was made. Does a team of professional footballers and coaching staff spend this 2 minutes deciding who may take a penalty in the eventuality of it being awarded or do they stand around biting fingernails, perhaps looking for loved ones in the crowd or considering which hotel they may go roasting in later??? Who knows what goes through these people’s minds. Barkley had placed the ball and he was still getting hassled by three of his team mates. The entire squad and staff needs to take the blame for that farce.
Baz, Dublin

…Beaten 4-0 by the mighty Manchester United on his Premier League debut
Beaten 1-0 by the voracious Valencia on his Champions League debut
This. Will. Not. End. Well
Mzeiya in Nairobi