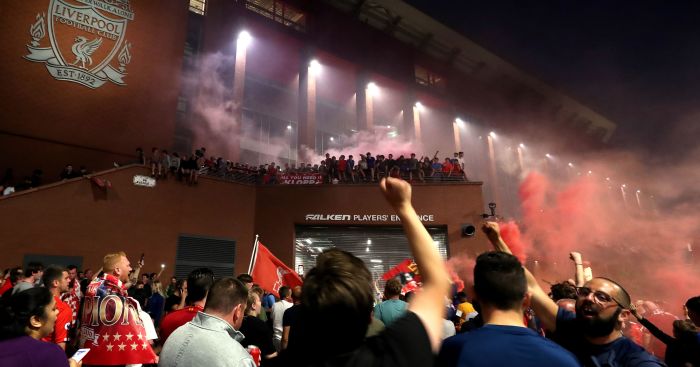 Liverpool fans may be let inside Wembley on August 29 to watch the Community Shield as part of the ongoing trials of allowing supporters inside grounds.

The Sun claims that the last Saturday in August will see the traditional curtain-raiser between champions Liverpool and the winners of the FA Cup, being contested this weekend by Arsenal and Chelsea.

And it is likely that 15,000-20,000 fans will be allowed inside Wembley to watch the match while observing social distancing guidelines.

The FA are apparently ‘a long way down the line in talks with the government to allow supporters to watch the game – the first time any fans will have been back in a football ground since mid-March’.

The government says that sporting events with crowds can go ahead in October, but only if tests prove satisfactory.

Cricket, racing and snooker have been the first sports to be trialled but football represents the real test as the most popular spectator sport.

Sports Minister Nigel Huddlestone said: “The pilot schemes are really important so we can hit that target of October 1 to open up more sport and get people back in stadia which is what everybody wants.

“We are looking for further testing as the weeks go by but so far so good.

“We are having discussions at the moment so that we can have more sports involved in the pilot.

“And I think the expectation is it is certainly reasonable to expect rugby and football games to be part of the pilot scheme.

“It is a matter of where and when, but we are having those discussions.”