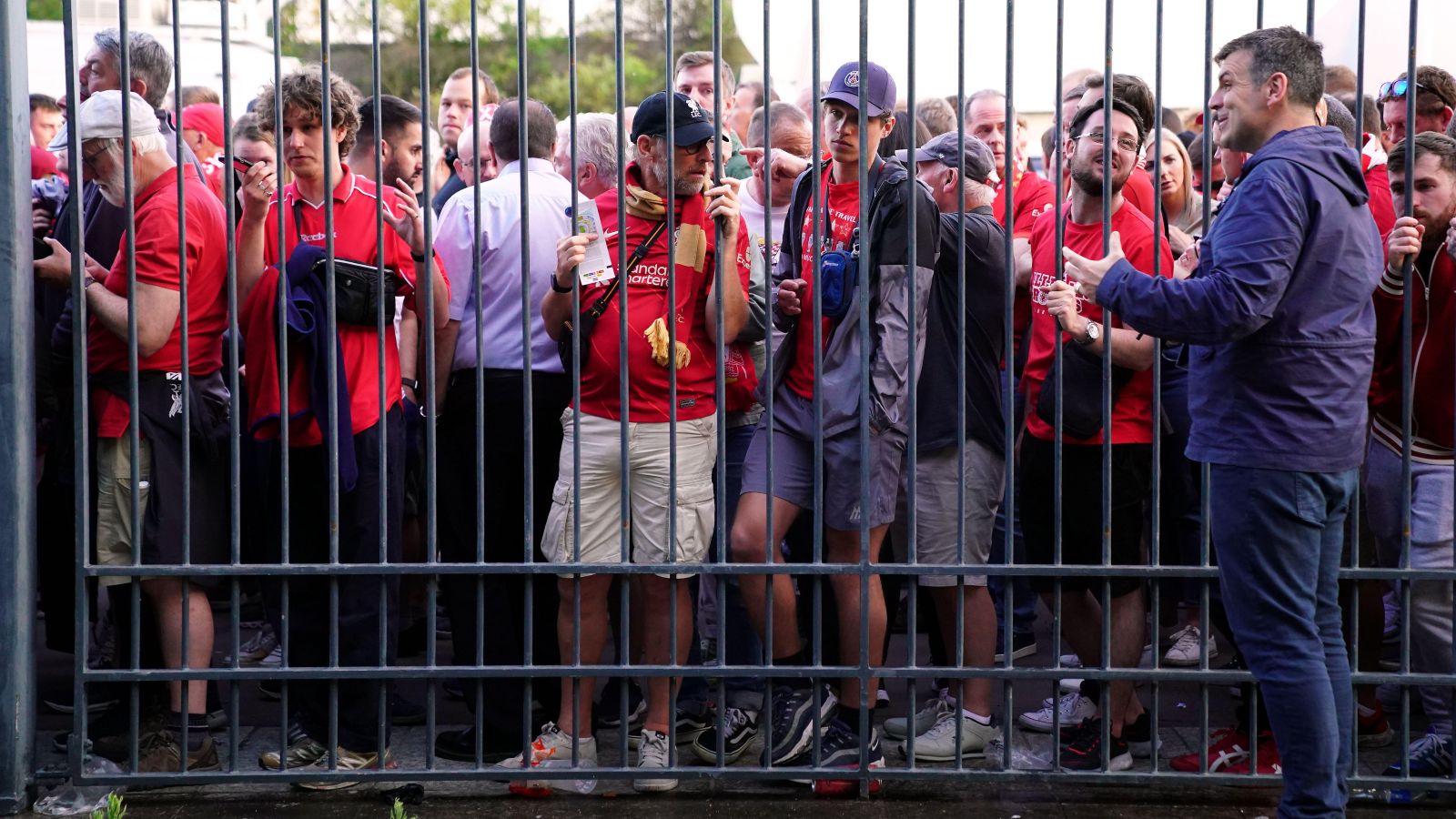 Liverpool fans were unfairly blamed for the chaos which surrounded last season’s Champions League final in Paris to “divert attention” from the failure of the organisers, a French Senate report has found.

The Senate has heard from Reds supporters, along with French police and government officials and UEFA’s events director, Martin Kallen, since the match on May 28, which kicked off more than half an hour late.

France’s interior minister, Gerald Darmanin, initially laid the blame for the delays at the door of ticketless Liverpool supporters for the build-up of crowds at the perimeter of the Stade de France, with police also using tear gas on fans as they waited to gain entry.

The provisional report of its findings, published on Wednesday, stated: “It is unfair to have wanted to make supporters of the Liverpool team bear the responsibility for the disturbances that occurred, as the Minister of the Interior did to divert attention from the inability of the state to adequately manage the crowds present and to curb the action of several hundred violent and co-ordinated (local) delinquents.”

It was welcomed by the Liverpool fans’ group Spirit of Shankly, which called for a full apology from the French government and the opening of a full parliamentary inquiry in France.

The report found the chaos had been caused by a “chain of events and malfunctions” in the days and hours leading up to kick-off.

It added: “The systems put in place had major shortcomings with regard to the intelligence (absence of hooligans but presence of delinquents in large numbers), the transport routes for supporters (removal of a drop-off route at the surroundings of the stadium) and insufficient communication.

“It is not only in the execution that problems arose. Upstream, the crisis scenarios were insufficiently worked on and did not demonstrate the necessary flexibility in the face of so many unanticipated events.”

1. A full formal apology from the French government published in French, English, and Spanish
2. A French parliamentary inquiry under oath

The Senate report said the French authorities must learn the lessons from the “serious collective failure” which had occurred and apply them to the hosting of next year’s Rugby World Cup and the 2024 Olympic Games.

The report described UEFA’s management of the ticketing system as “unsuitable” and criticised a lack of training for stewards, who it said were quickly overwhelmed.

UEFA had failed to put in place a system in advance to detect the extent of forgeries, the Senate found.

The report said the French football federation (FFF) had identified 2,471 counterfeit tickets, 1,644 of them in the southern sector of the stadium dedicated to Liverpool supporters.

It also said the decision to run a first check on ticket validity at pre-screening security points had led to checkpoints becoming blocked.

The Senate recommended the introduction of tamper-proof ticketing for such major events, and improved co-ordination between stewards and police.

That, combined with a lack of relief lanes at the exit of the RER D station, led to a “crisis situation”, the report said.

Policing was said to be influenced by a “dated vision” of British fans as officers prepared for an influx of hooligans, rather than a plan built around the enjoyment of supporters and their ease of access to the venue.

“Welcoming supporters in a festive setting had been neglected,” it stated.

Security personnel were slow to intervene in acts of theft by local delinquents – and to remove them from the stadium forecourt – owing to the congestion caused by transport and ticketing issues, the report said.

The presence of these delinquents was said to be “predictable”, but the number of police assigned to fight crime was not sufficient.

The report was told 209 officers had been deployed to cover the possibility of crimes being committed at the final, less than a third of the number on duty for the same purpose at the France v Denmark Nations League match last month.

Spirit of Shankly said the chaos around the final represented a “monumental failure” by the French government and UEFA.

It thanked the Senate for welcoming the testimonies of fans and vindicating them from any responsibility, but added: “There remains the issue of lies being persistently repeated.

UEFA has commissioned an independent review into the events surrounding the final. The preliminary findings of that review are due to be published in September.