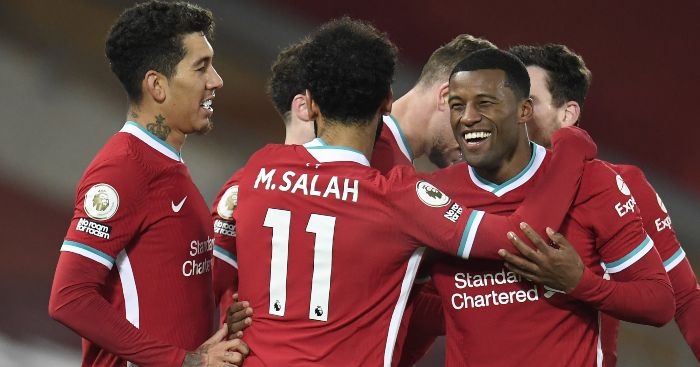 Liverpool midfielder Georginio Wijnaldum has given Barcelona the thumbs up ahead of a move to the Camp Nou, according to reports in Spain.

Following the appointment of Ronald Koeman, the speculation that Wijnaldum could leave Anfield on a free to Barcelona this summer has intensified.

Koeman is a huge fan of Wijnaldum having worked with him while in charge of the Netherlands, and is keen to reunite with the midfielder in Catalonia.

OPINION: Jurgen Klopp is right-back where he started at Liverpool

A report on Wednesday said that the former Netherlands boss is ‘confident’ of signing Wijnaldum in time for next season, with the 30-year-old’s contract expiring at the end of the season.

Another report the week before claimed Wijnaldum had rejected a new deal from Liverpool and that the the midfielder ‘does not want to remain’ at the Premier League club.

And now Spanish newspaper AS (via Sport Witness) reckons that ‘Koeman has a plan’ as he looks to bring in January signings.

Wijnaldum has apparently ‘given the green light’ to Barcelona to sign him in the winter market but the current economic climate ‘does not invite optimism’ as Koeman looks to bring in three signings in January.

“When I left to go and play in Germany, where TSG ­Hoffenheim had become a big force, it was to become the biggest regret of my career. The only reason I left was because I wanted to have more playing minutes to keep my place in the Holland team.

“But you don’t realise how dominating the playing style is at Liverpool until you play in a different team and league.

“As a Liverpool player you are always in the spotlight. The club is massive.”