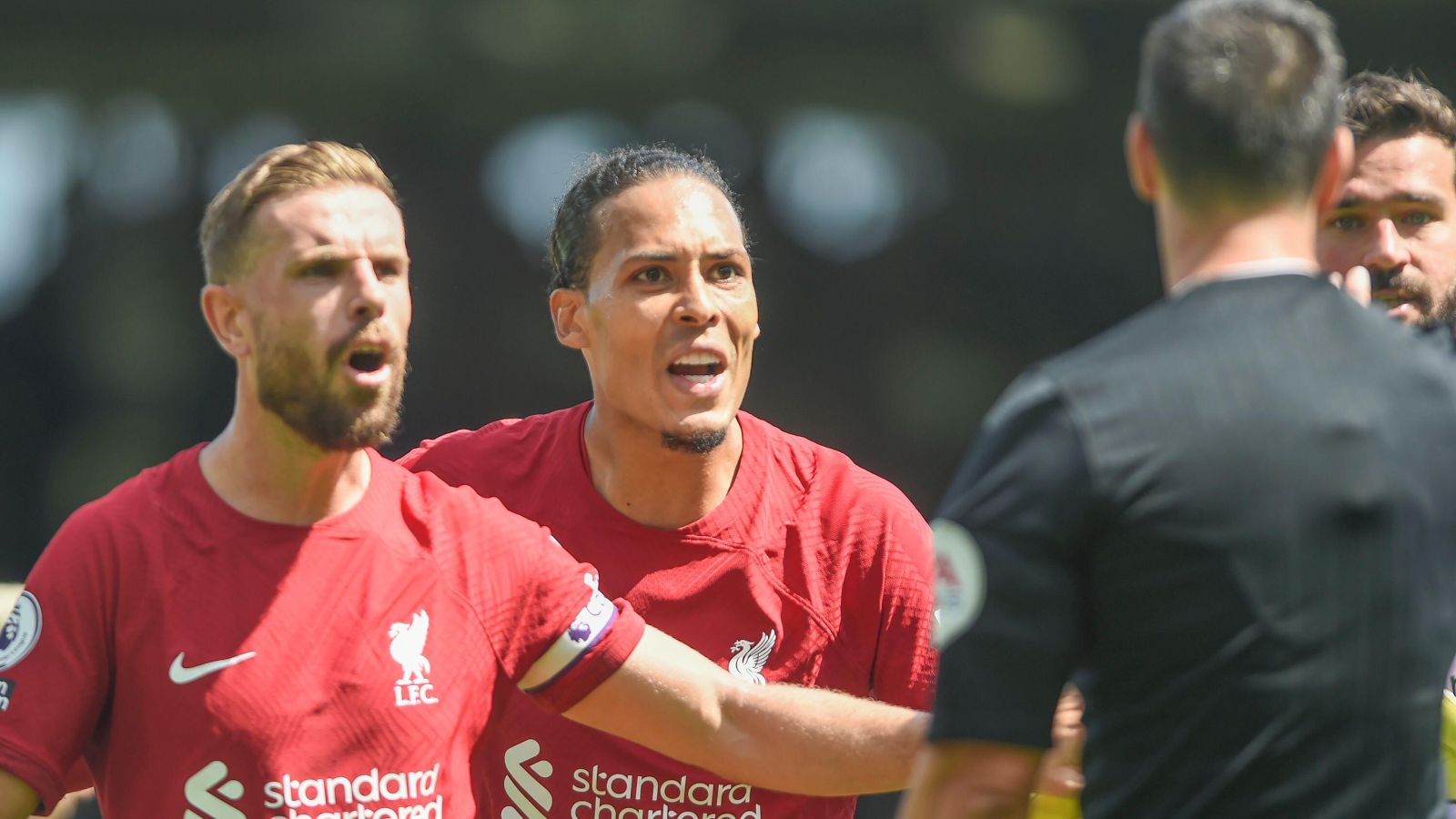 Liverpool ‘really stunk the place out’ in the first half against Fulham as Reds fans try to suppress their kneejerk reactions. Plus, relegation discussion, alternative predictions and more…

Liverpool v Fulham
Well, that was…irritating. During and immediately after the game I told myself not to get to over react but christ, that was a frustrating watch. Liverpool were second best in every aspect of the game in the first half and only mildly better in the second. Ten minutes in I was thinking Fulham couldn’t possibly maintain their tempo but they did and made Liverpool look ordinary. Second to loose balls, misplaced passes and just generally bad. Fabinho had one of his worst performances Liverpool, Trent had one of off days werein he seems caught between attack and defense and so does nothing. I wouldn’t blame him too harshly for Mitrovic’s first however as the cross was superb, as was the header. Fulham to a man were excellent. Reed was mighty, Paulinha likewise, even Perreira who’d I’d written off a long time ago was great. Their use of the ball and the speed at which they used it was outstanding.

Núñez made an impact needs to start in future as I feel – though I’m loathe to say it – Bobby’s not cutting the mustard anymore, though I’d love to be proved wrong. Perhaps Keita would have made a difference today with his ability to dribble through the lines and actually might have actually made something happen in midfield. Diaz tried his heart out as always but overall the number of poor and intercepted passes from Liverpool was shocking.

I don’t buy the excuse that’s it’s the opening day given the tempo in the Charity Shield game. Were Liverpool guilty of arrogance today, against opponents were clearly extremely motivated? They surely have to expect this intensity from a newly promoted team, on their patch, on the first day of the season.

Must do better.
Alan (trying to keep my knee from jerking).

First half Liverpool really stunk the place out today. Think it was a combination of factors; hot day, really aggressive Barclays from Fulham from the first minute and Mitrovic was a beast. We were not up to the task and had no solutions. Felt Firmino was the wrong 9 for the day. He likes to come deep for the ball but that meant that when balls were played long to Salah or Diaz they had little support and were doubled up on. Felt Nunez occupied two when he came on which is why the game seemed so much more open.

Trent was poor today all over. Definitely weak for the goal, was the target for so many of their attacks and didn’t add much offensively today either. Again we looked better when Elliott came on and took away the attacking responsibility from him. Holidays over lad.

Had Fulham scored their big chance at 1-0 think it would’ve been a win for them on the day. As it stood we should’ve scored a winner when it was 1-1 and then in the end 2-2 is possibly a fair result or maybe flatters our lot.

Overall a draw away isn’t a horrendous result. Obviously you’d like to do better against a newly promoted side but think they showed today they’ve got some metal and Silva plus Mitrovic might feel they have some points to prove.

If today wasn’t a very strong message that Nunez and Elliott should be starting the next match then I don’t know what more they could’ve done. Both exceptional today.
Minty, LFC

A point away on the opening day is never a disaster.  It’s not ideal, but I coincidentally just caught up with the F365 yearly preview yesterday and it doesn’t appear that anyone agrees with my hot take that somewhere around 80 points will win the league this year. but I think it’s far more likely than anyone even approaching 90.

Remember, a lot of “The Rest” will have a one month rest.

I kinda think the idea that this year is only a 2-horse race is nuts.  The World Cup in the middle of the season is going to be bonkers.  Tournament football is an “every 3 days affair”  and nobody has the squad to cope.

Pep always carries a smalli-ish squad.  Right now, he’s got 20 senior players.  Only Mahrez and Haaland wouldn’t expect to be at the World Cup out of key players.

For Liverpool, we’ve already got an injury crisis.  But, we’ve got starters (and key backups) staying.  Salah, Luis Diaz (if there are many mononym players in world football, he might just be the opposite as his names just jump together), Andy Robertson, Naby Keita and Kostas Tsimikas play for countries who won’t be at the WC.  Joel Matip has retired from international football and this tournament probably came too early for Harvey Elliot and Curtis Jones, though they’re quality young players.

Bobby Firmino would probably be super sub if he makes the plane for Brasil, if not, the rest could be great for him. Trent plays at a stacked position and doesn’t quite fit with Gareth Southgate’s style and Fabio Carvalho is not yet a full international for Portugal (I assume there will be some U-21 matches, but I don’t know how many during that time?).

Spurs have a lot of key players going to the WC, so they’re going to have to cope and they might need Conte to get a tune out of Ndombele before this is all over.   That might not be pretty.

Arsenal look to me like they’ve got a squad of players that might be able to cope.  I don’t expect any of their Brasilians to play 90 minutes in every match on their way to the Final.  Odegaard will get a nice rest.  Saliba only just got his first cap and we’ll see if he makes the squad. Bellerín probably won’t make it and you lot will know more about their England players, but they’re all at least fairly young and playing in a deep squad.

Chelsea is an interesting case because they’ve got a lot of English players who will certainly participate, but, again, are all in positions where Southgate will rotate, or they’re young, talented players who are going to miss out or not play much.  Werner might go and play a lot or he might not make the plane.   Ziyech will be at home with Emerson, Jorginho and Broja.

My issue with picking Chelsea is that Todd Boehly is behaving like the worst type of Dunning-Kruger affected American sports team owner.   How in god’s name he could lack the self-awareness  to think he could parachute into a new  industry/sport in a different country and just hit the ground running is f***ing wild to me.  He’s a certifiable maniac, and that Cucurella purchase signed the certificate.

Long story short, I don’t know anything either, but I think you lot might regret having not been a little more creative this year.  I think you stayed too close to chalk.

In order (I’m not the type of person to ever attempt a reverse jinx):   City,  Arsenal, Liverpool, Chelsea.   I find it inconceivable that Harry Kane makes it thru this season and Conte should be expected to blow up around March.
Ian, LFC (Newcastle for 5th, West Ham for 7th) Hartford, CT USA

If Liverpool can fill the gaping hole at right back before the window closes I think they can still compete for a top half finish.
Greg, Tampa

Stop the league
Can’t believe how excited I am that the premier league is back, but as spurs are top can we stop the league and declare them the winners
Paulo (that is how it works with my children in board games)

4 goals in the sunshine, my Mrs experiencing her first game and wrapping my arm around a stranger and sharing a dance for the last goal.

Fulham relegated?
It is 75 minutes now and I still think Liverpool will win or at least get a draw, but even if they don’t, they will rightly point out that things are just starting and they will kick into gear soon. But it seems to me that everyone just put up Fulham as relegation candidates, so, let me hear you guys again?
Sa’ad

Would you like another go at the relegation predictions.

Are Forest 12th yet

Yours,
Fulham and Bournemouth fans

Embarrassing from him, not a surprise. He says things to stir

1. Get an actual grip , it’s one game
2. Stop click baiting for readers and come back to actual analysis
3. Please don’t join the knee jerk generation
4. Won’t publish, because it makes the article and the writer look a bit silly
5. Disappointed. I won’t be alone. Your website is the last bastion of common sense but articles like this spur the taste
6. My opinion is not yours, so it won’t be published

Thanks anyway
Ade (20 is coming ) Guildford

Alternative predictions
It’s a mugs game but let me make some oblique predictions as the season kicks off.

Benitez and Dyche will be employed in the premier league by Christmas. Either at Fulham or Bournemouth or Southampton.

Tuchel, Frank, Lage and Lampard will also not last the season. Could potentially have 8 plus managerial changes this season.

Callum Wilson to get injured and miss 20 plus games for United.

Nottingham Forrest to end up top 10.

Pochettino to be next Chelsea manager.

Manchester Utd fans to have the usual meltdowns and whinging.

The Ronaldo saga will bore everyone to tears.

80% – 90% of the mailbox will about Manchester Utd, even though they will be a mid-table team.
Stinky Pete

Nobody seems to be paying attention to City’s best signing
Being in the United States, I follow a number of Leagues and Teams in both Europe and the Americas.  I’ve been reading  a lot of opinions and predictions about how Premier League teams will fair this year, and have noticed a glaring omission.  I watch a lot of Argentine football,  in particular my favorite team River Plate, and hence have been watching Julian Alverez with a lot of interested over the last couple years.  He is an absolute play-maker of the highest quality and probably the best Argentine of his generation.  While he seems to be off everyone’s radar screens, I can promise that he won’t be for long.  In my opinion probably one of the best additions to a Premier League squad (with all due respect for the amazing Haaland, who I’ve been following a Dortmund since he’s been there).  If these two can get there chemistry right up top for City, look for the 106 goal 2017/18 record to fall.
Stephen – USA