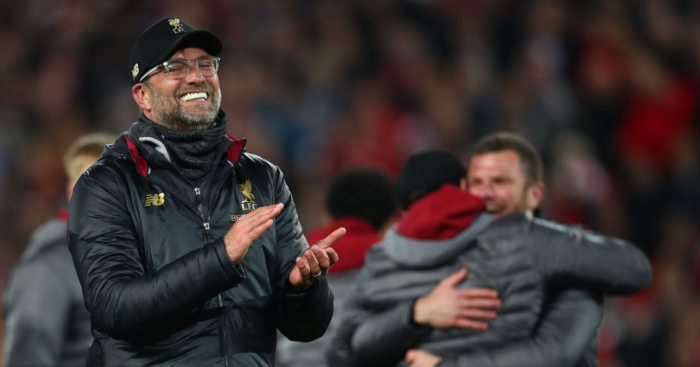 Jurgen Klopp thinks Liverpool “have gone from being the not most attractive girl in the village to a supermodel” in the eyes of the football world.

The Reds will play in the Champions League final against Tottenham on Saturday after blowing Barcelona away 4-0 at Anfield in the second leg of the semi-finals to overcome a three-goal deficit.

And Klopp thinks that performance against the Catalan giants has put the club right back into peoples consciousness.

“If I had watched the Barcelona game as a seven-year-old, I would remember it,” Klopp told The Telegraph.

“Everyone in football knows it was so special and it is not something you will see often in your life. Liverpool have gone from being the not most attractive girl in the village to a supermodel.

“We are one of the five or six best clubs in Europe again. I do not know when that was last the case but it was a while ago.

“That is why I am happy for the people. They see where their club is and think, ‘Look at that. Look at that red. That is Liverpool’. This is what we feel now.

“If I am trying to make signings I don’t have to convince players anymore and tell them what Liverpool is. That is obvious. I never had so many messages as I did after both Barcelona games. Everybody watched it, and thought, ‘Wow, what was that?’ I have never had so many compliments for the performance of my team.

“I don’t know how many people watched but there will have been a few in the world. That makes it special as well – one game, a semi-final. There was no other game on the planet with such focus.”