Home F365 Says Liverpool in danger of slip, sliding away as Anfield is breached 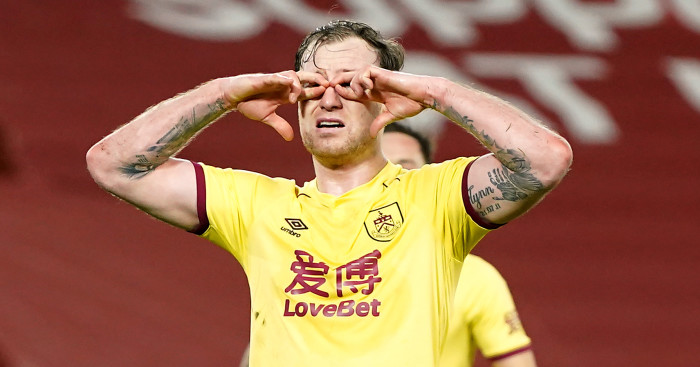 There were several damning things about this joltingly bad result for Liverpool. The end of their proud 68-game unbeaten home run. The end of that run against Burnley. And most of all, that you really could see it coming.

For all Jurgen Klopp insisted that the way the game played out it was “impossible” for Liverpool to lose, it really was no surprise to see Liverpool fail to break down a thoroughly well-organised defence in front of an in-form goalkeeper. And Burnley had their moments even before the penalty in a slightly more open second half. The shot stats will tell you it was a smash and grab but it didn’t quite feel like that. Apart from to Klopp.

It’s now well over 400 minutes since Liverpool last scored a Premier League goal, and for all that attempts rained down on Nick Pope’s goal tonight – 26 in all – vanishingly few of those were clear-cut chances. Just like against Manchester United. And Southampton. And Newcastle.

The clearest chance – smacked wastefully and crucially against the crossbar near the end of the first half by Divock Origi – came from the one mistake Ben Mee made all night. The rest were mainly from distance straight at Pope, who also spent plenty of time plucking crosses out of the air with minimal fuss. Pope did have to make two fine saves to go with several comfortable ones but really didn’t have the sort of strenuous night one had come to expect – until a few weeks ago – for a visiting keeper at Anfield. He was busier than Alisson but certainly not stretched any more than Liverpool’s keeper, who had saves of his own to make even before bringing down Ashley Barnes for that record-ending penalty that will have been celebrated at Goodison, Old Trafford, the Etihad and the King Power and met with despair at Fulham, West Brom, Brighton and more.

It’s a seismic result at both ends of the table. And while it’s easy to focus on how poor Liverpool were – and they really, really were – Burnley were magnificent. There was no surprise about the way they played, with eight yellow shirts in the Liverpool box for much of the night. But unlike your more traditional bus-parkers they always have Barnes and Chris Wood to provide an outlet. Those two get through some serious work and it proved to be the test that finally stretched the hitherto remarkably successful Fabinho centre-back emergency measure past breaking point. It was he who let Barnes get away to win the penalty, probably fouling him before Alisson did for a two-in-one penalty bonus.

Burnley now sit seven points above the relegation zone and have settled into a decidedly Burnley run. That’s now 13 binary results – 0-0, 1-0 or 1-1 – out of 19 this season and since the key defenders have returned and Pope has put his early-season struggles behind him, they’ve been a tough nut to crack. A huge night for Dyche and his team after a gameplan executed to perfection. When Pope, Mee, James Tarkowski, Wood and Barnes play like this, there are few more effective strategies than Burnley’s deceptively simple one. They ran into Liverpool at the perfect time and took full, spectacular season-breaking advantage.

But all eyes will be on Liverpool. They were rotten. Again. Yes there were changes to the attack, but it was deeply ponderous again. Chances are not coming. Trent Alexander-Arnold and Andy Robertson are not creating the chances they did last season. Thiago looks like a third wheel. A beautiful one, but a third wheel nevertheless. They are in trouble. The title defence is slipping away, and so too might even be Champions League football.

Because Liverpool now face a decisive month. After Manchester United in the cup at the weekend they face the other five members of the current top seven within their next six Premier League matches. It’s 36 days since Roberto Firmino headed Liverpool past Spurs and above them into top spot. When they meet for the reverse fixture in a week’s time it could be sixth v seventh. Lose that one, and Liverpool will be back below Spurs (who’ll have a game in hand and have themselves been pretty mediocre since Anfield) and potentially nine points behind the leaders. With West Ham, Manchester City, Leicester and Everton all to follow in quick succession. There’s some Champions League stuff with Leipzig as well, just for good measure. It might be just the run of games Liverpool need to get themselves going again (although the United game is a strong counterpoint) but it could just as easily see a season completely slide away.

That is the reality Liverpool are facing. This game was no one-off. Had, say, Origi scored his chance or Pope not been at his best to deny Mo Salah, then Liverpool would’ve got the result they needed but it wouldn’t really have represented a corner turned. It’s another poor performance in what is now a strikingly long run of them.