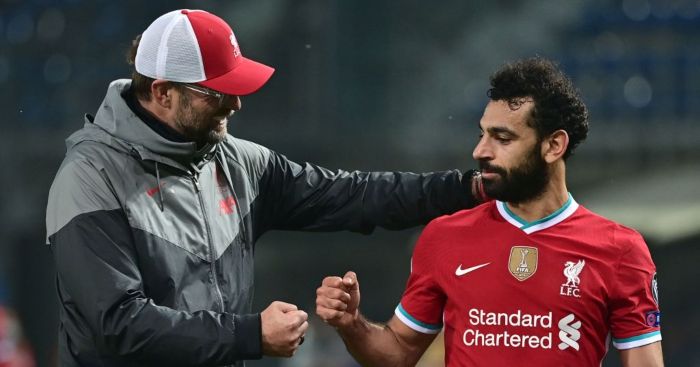 Jurgen Klopp says Mohamed Salah is in line for a recall for Wednesday’s Champions League clash against Atalanta.

The Egyptian was ruled out of Sunday’s 3-0 win over Leicester after testing positive for the virus on international duty but rejoined the group after a period of isolation.

“Mo trained and looked really good and he gave a negative test like the rest. He is available [for selection] and we will have to see what we can do with that,” Klopp said.

But the Liverpool boss didn’t give anything away in terms of when Jordan Henderson, Thiago Alcantara and Xherdan Shaqiri would be back in contention,

He saod: “All the rest – no news. We will see. I don’t want to speak too much about it because I have no idea who Atalanta can bring – so why should we give any information?”

Liverpool hammered Atalanta 5-0 in Bergamo last time out in the Champions League and can seal their place in the last 16 with victory on Wednesday.

Klopp added: “Atalanta is a threat even without a point to prove. The last game against them was a very special night. We played exceptionally well and did pretty much everything right, so many things came together.

“But that has nothing to do with tomorrow night. They are a top team who play a special way. I expect problems, always like this, and we must find the solutions.

“They work really hard and their man-marking system is tough to play against, so we will see who we can line up with.”